It feels like it has not been too long ago when the Wrong Turn franchise first came out. In fact, I had to go back and look to see when it was originally made. The first installment released on May 30, 2003 in the U.S. Starring Eliza Dushku, Desmond Harrington and Emmanuelle Chriqui, the original Wrong Turn depicts a group of people who encounter some inbred cannibals named The Hillickers. The series added more members to the cannibal family in Wrong Turn 2: Dead End (2007). From there, the series lost more and more steam. Finally, in 2014, Wrong Turn 6: Last Resort appeared to signal the end. After a great start, the quality of the franchise crumbled, becoming nothing more than films depicting nudity and gore. And while that may sound all right for some, the charm wears off pretty quickly.

Seven years since the last release, I was kinda shocked to see Wrong Turn showing up in my newsfeeds. Initially, I just assumed, like everyone else, that it was just another sequel (or prequel as the movies in the series flip flopped between the two). However, once I started looking into it, I understood that this film is a complete reboot of the series. And honestly, Wrong Turn needed a do-over after the last few years of failures.

This brings up a question I ask a lot about reboots: How soon is too soon? How many years must typically pass before Hollywood greenlights a reboot? Yes, it may have been 18 years since the original Wrong Turn graced the silver screen, but it has just been a scant seven years since the final sequel. To put it into perspective, Guardians of the Galaxy released the same year as Wrong Turn 6. Should Hollywood reboot that series this year or is it too soon? How bout It Follows or Creep? And before we go too far, Godzilla also released in 2014, which was a reboot that was later remade. So, maybe it is not too soon, in the eyes of Hollywood.

I guess Godzilla showed us that if the reboot is good, it is worth it. So, how does Wrong Turn stack up?

Wrong Turn (2021) is directed by Mike P. Nelson. Starring Charlotte Vega, Adain Bradley, Bill Sage and Matthew Modine, the film primarily follows a group of friends on a trip to the Appalachian Trail in Virginia. The group does not exactly fit in well with the locals, viewed as “yuppies” and arrogant to some degree. Still, they are warned not to wonder off the main trails.

Of course, the group does not heed the warning, and soon finds themselves being stalked by another group of people who call themselves The Foundation. A couple of members of The Foundation confront Jen (Vega), Adam (Dylan McTee), Darius (Bradley) and Luis (Adrian Favela) as to why they are on their land. Fearing for their lives, Adam kills one of two men. However, before they can flee, the friends are captured by more Foundation members.

The group is taken before the the Foundation’s leader, Venable (Sage). In a makeshift trial, Adam is found guilty of murder. Jen, Darius and Luis are also found guilty of bearing false witness. Venable carries out the judgement on Adam and Luis quickly. However, Jen talks Venable into sparing the lives of Darius and herself in exchange for their servitude. With only Jen’s father, Scott (Modine), looking for them, the pair is helpless. 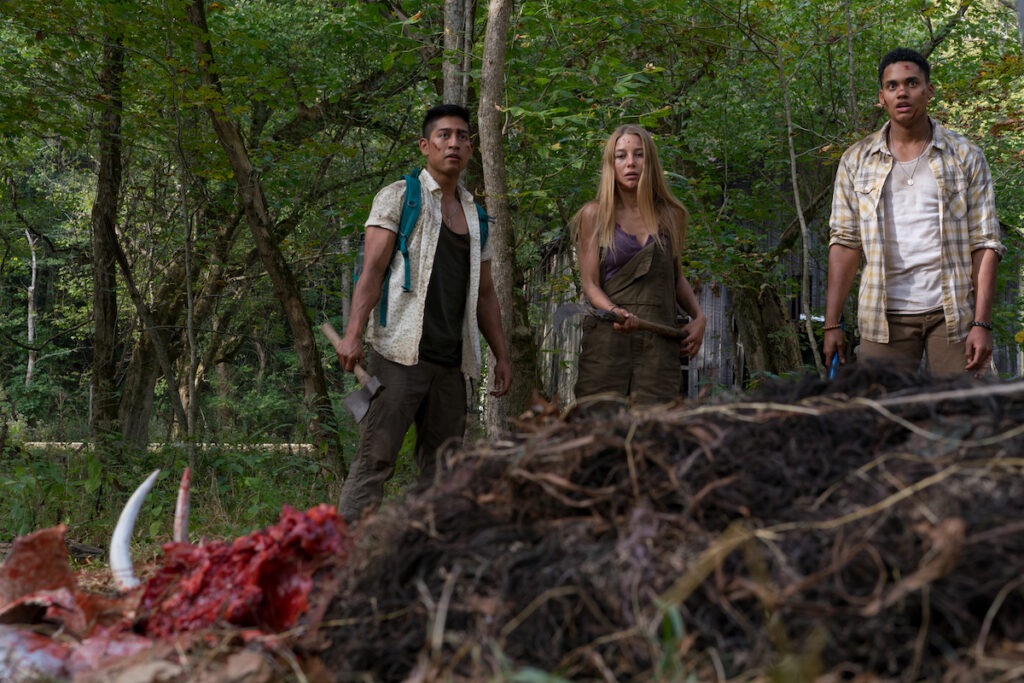 This reboot is done very well. While Wrong Turn no longer has the “crazy, murderous, cannibal hillbillies” to fall back on, they have created a whole clan of people in The Foundation. While they do appear to be “behind the times,” they are far from being stupid. They create elaborate traps, have a form of government, including different classes of people within their ranks. As they are not deformed like their predecessors, they can blend in with the world outside their walls, as seen several times during the film. It’s honestly refreshing how Mike P. Nelson breathed new life into the Wrong Turn films.

One thing I did like from the other Wrong Turn films was the gore. Normally, I am not the biggest gore whore around. But there are several kills in the series that just make me gasp audibly when I see them. Tell me you didn’t cringe in Wrong Turn 2, when Kimberly is split in half during the opening moments of the film. This new Wrong Turn film keeps the gore to a high, albeit not insane, level. There are plenty of smashed heads, impaled body parts and melted eyes to go around. The film does not focus on them; however, it does not shy away from showing the aftermath of some brutality. It’s a great blend of blood and guts.

Out of all the Wrong Turn films, I have to say this one is probably my second favorite, behind the original film. I give Wrong Turn 2021 four out of five stars. The plot was easy to follow. Unfortunately, Wrong Turn did follow the “group lost in the mountains” trope a little too closely, and I found myself already knowing what was going to happen next. The ending scene did a lot to fix that issue and left open room for more rebooted Wrong Turn films. I am excited to see where the new path takes Wrong Turn. Let’s hope that path doesn’t take its own wrong turn.