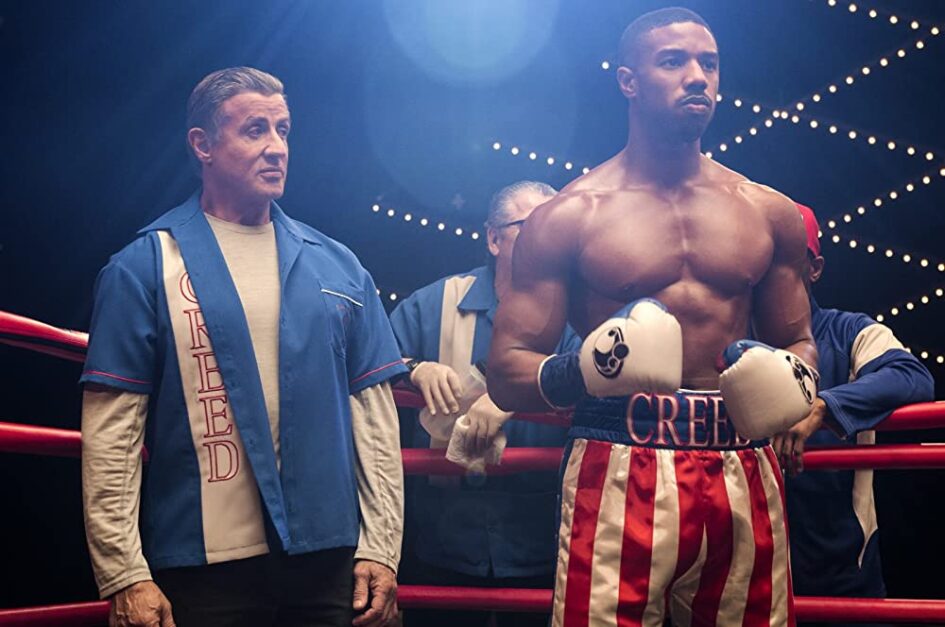 Per Matt
Ah, the ’80s — the decade when Sylvester Stallone ruled movie theaters with interchangeable Rocky Balboa and Rambo flicks, scattered with something random and unexpected (Tango & Cash, Over the Top). Later parlaying that box-office success into a worldwide restaurant chain, the filmmaker’s big-screen roles throughout the following years became somewhat monotonous, although he wasn’t afraid to try something different from time to time (Demolition Man, Stop! Or My Mom Will Shoot). His career received a jump start with the launch of The Expendables, but it was with Creed, released in 2015, that I realized he was finally back in the Hollywood game. And since then, his showbiz stock has skyrocketed. So, it only felt natural to crown Creed II the heavyweight champion of My Guilty Pleasure.

It was pure genius of MGM, New Line Cinema and Warner Bros. to bring multi-hyphenate Ryan Coogler into the world of Rocky. Spinning off a storyline from Carl Weathers’ deceased character, Apollo Creed, Creed‘s all-star cast brought Michael B. Jordan, Tessa Thompson and Phylicia Rashad together to dust the cobwebs off Rocky (and its long-suffering Franchise Syndrome). The film was simultaneously nostalgic and something new, bringing a fresh perspective to Stallone’s characters. I was pleasantly surprised by how much I enjoyed watching the movie.

Already a rising actor, the movie helped catapult Jordan’s celebrity (with the exception of his role in the Fantastic Four reboot), leading to the casting couch of Black Panther. Also released in 2018 was Creed II, which didn’t receive as much publicity at the time, but it did bring a great deal of enjoyment to this fan of the franchise.

As soon as Adonis Johnson becomes the heavyweight champion of the world, his life changes. Preparing for marriage, he and Bianca discover a baby is on the way and a new sort of battle awaits him. Like a blast from the past, Ivan Drago’s been hard at work training his son to box. And much like Rocky IV, the champ is broken. It’s a long, hard road fighting for his life, as well as his family, but it makes for a great story. And it doesn’t hurt to bring in Dolph Lundgren and Brigitte Nielsen to form a familiar and forceful rivalry. While Creed II does mirror some of the beats of Rocky‘s Cold War era release, it does stand on its own.

As a Child of the ’80s, I absolutely loved this sequel. Adonis is just as stubborn and as tough as Rocky, but with all of the life advice imaginable, the character must still figure out things for himself. Such is life. It’s hard on all of us.

Moving onto other projects, Jordan will soon appear in the next Tom Clancy movie, while Thompson will be in the next Thor sequel and Stallone will voice the role of King Shark in James Gunn’s The Suicide Squad before returning to The Expendables 4. And, hopefully, they will all reunite for Creed III, which was recently announced to be the directorial debut of Michael B. Jordan. If the crew can manage to bring an exciting, all-new storyline to these established characters, I’m all in.

That’s why the Creed franchise is undefeated as My Guilty Pleasure.