Zelda, Take My Breath Away

Breath of the Wild (BotW) has many of the familiar trappings of a typical Legend of Zelda, but by way of other open-world games such as Skyrim, with a dash of Dark Souls. For a video game series that has followed the same general formula for the last 30 years, BotW learns from every previous game and puts those lessons to good use. Non-linear pathing from A Link Between Worlds, 3-D combat from Ocarina of Time, Skyward Sword’s stamina gauge, even color-coded enemy toughness from Zelda II… are all present in BotW.

And where BotW uses the best aspects of those games, it has also wisely jettisoned some of the most criticized aspects. Gone is the lengthy tutorial level. No longer do you have to sit though a cutscene to open a treasure chest. Dungeons do not have the same basic structure… if you could even call the temples and Shrines in the game dungeons.

There are more puzzles out in the open world that have ever been in a Zelda game before (possibly more than all the previous games combined). And you are given every tool you need to solve every puzzle in the first hour or so of gameplay. I have completed about 35 of the game’s 120 Shrines, and they nearly all have their own unique identities (barring a few combat-centric ones). There are 900 Koroks hidden within the world, some under rocks and others hidden in mini-puzzles, and still more behind marksmanship challenges. And unlike collectibles in other games, the Koroks serve a vital purpose — they help increase your inventory.

Combat follows the same rules that were introduced in Ocarina of Time, the patron saint of lock-on 3-D combat. However, because of the vastness of the open world, many of these encounters can be engaged in a plethora of different ways. You can sneak into an encampment and whack sleeping Moblins on the head with a soup ladle. You can push a boulder down a hill and crush you foes. A well-placed first arrow can set a field of dried grass on fire.

Zelda has also always been known for its sidequests, but while they are usually well-thought out and engaging, there aren’t very many per game. There are probably more sidequests in BotW than there are in (and I’m repeating myself here) every previous game in the franchise.

All of these changes make for a video game experience that is unlike any Zelda that has come before. Other smaller changes make combat more difficult and engaging. In fact, this is the most difficult game since Zelda 2, back in the ’80s. I died more times in the first hour than I have in all Zelda games in the past 15 years. 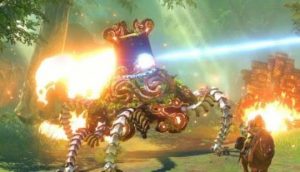 Nintendo has also continued to use an anime-inspired art-style that has been the de facto since The Wind Waker. Although much maligned at the time, the decision has been seen as one of the best that could have been made for the franchise — and is still the case today. By eschewing the hyper-real graphics that most modern games utilize, BotW is game that will likely age very well (see The Wind Waker), and helps to create a cohesive world. And this world… I could spend paragraphs talking about the tiny details. Wolves hunt in packs, and retreat when you kill the Alpha. Killing any animal with fire nets you cooked meat. Your mount gets afraid of lightning. This is all done with the typical polish that Nintendo is known for.

There are, however, a few minor quibbles I have with the game. Combat is difficult and engaging, but weapon durability is sometimes laughably low. I’ve been in relatively small-scale fights where I have had my weapon break three or four times. There are tons and tons of puzzles, but I think that the fact there are so many has diluted the difficulty. I understand that not every puzzle can be a complete head-scratcher, but out of the 30+ Shrines I have solved, none have given me much trouble.

Lastly, the musical score is pretty underwhelming. I completely understand the desire to use a more subdued soundtrack to help emphasize the vastness of the world. That said, the Zelda series has always been lauded for the brilliant pieces of music found within, and BotW is just lacking.

These few squabbles aside, The Legend of Zelda: Breath of the Wild has surprised me in a way that I wasn’t sure video games could do anymore. It has taken bold risks with one of the most celebrated franchises in gaming, and those risks have paid off tenfold. Breath of the Wild fundamentally changes the Zelda series more so than the lauded Ocarina of Time. These changes make for one of the most vibrant, alive and engaging video games of the past five to 10 years, if not of all time.