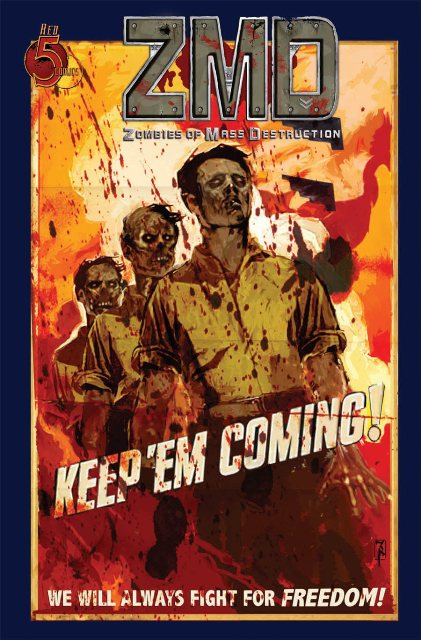 What happens when the U.S. government creates an undead stealth weapon? From the co-creator of Underworld is ZMD: Zombies of Mass Destruction.

In this limited comic series of six-issues, Kevin Grevioux has envisioned a weapons program that drops Zombies behind enemy lines, using expendable soldiers (aka recyclable), called necroites, to do the Army’s dirty work. A failsafe protocol is built into their DNA, leading to one of two conclusions: After 14 hours of reanimation, they will dissolve or exposure to sunlight will lead to disintegration — whichever comes first.

The government’s hope is to use these biological weapons of mass destruction to prevent any more American casualties in battle, but the best laid plans of mice and men often go astray. When one Zombie outlives the rest in the Middle East, a full-blown World War III could be in the wings, unless the situation is settled quickly.

Normally, I tend to enjoy Zombie stories taking place outside the United States, because different types of people have different reactions to disasters. This one offered a Persian perspective to dealing with the undead.

ZMD is definitely a new take for the genre (Apparently, Patient Zero communicates like a hive mind to all Zombies); however, Grevioux’s storyline is a bit thin. The overall arc is propped up with Colonel Drake’s flashbacks and a sprinkling of bureaucratic politics by the bigwigs, but the insurmountable obstacle seems to be resolved way too quickly. The writing was OK (although there were a few bad typos), the art wasn’t great and it has a ridiculous ending, but with this genre, that’s kind of expected.

I had no idea there was a feature film adapted from this graphic novel, so there’s that. I’ll probably be straying from it.

Notable Quotes:
– “So you’re Captain America now?”
– “Didn’t you see Dawn of the Dead?”
– “Count your tags and bag the rags.”
– “Just because I’m dead, doesn’t mean I’m stupid.”
– “Somehow I doubt Persian Zombies speak English.”
– “It seems that stupidity is not solely a Western trait.”
– “One thing I’ve learned about science — anything is possible.”
– “Sweepin up Zombie dust ain’t my way of spendin’ an afternoon.”