30 Years Later, What Can We Expect From Bill & Ted? 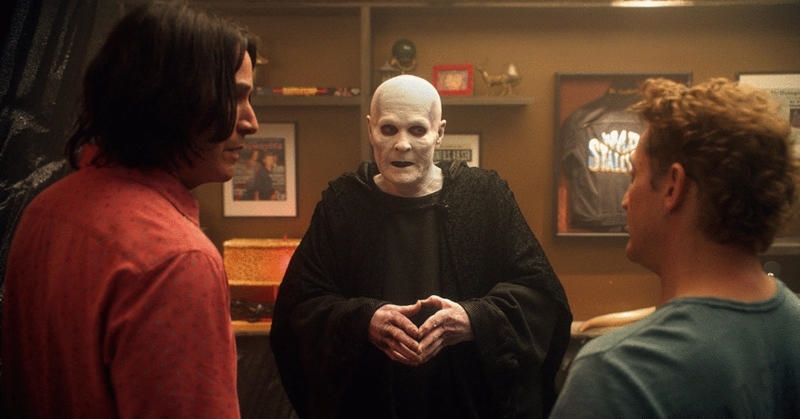 Per Matt
Bill S. Preston Esq. and Ted Theodore Logan were DEFINITELY products of the ’80s. The two time-traveling metalhead slackers were wonderous, in all of their simplicity. Spouting infectious catchphrases and traveling much like Doctor Who long before smartphones were a thing, this rocking duo somehow managed to ace a history test, overcome death while defeating a pair of evil robot doubles and somehow, a future Utopian society is based on the music of their band, Wyld Stallyns. Unfortunately, their music is STILL yet to be written. So, what’s a pair of burnouts facing fatherhood and a major case of writer’s block to do? Enter Bill & Ted Face the Music!

Currently scheduled to release on September 1, 2020, it really is a miracle that the Bill & Ted franchise is still somehow alive and kicking. For the longest time, the franchise hung in limbo, forever destined to collect dust. Once their Excellent Adventure introduced the world to the guys back in 1989, the film became an unlikely hit, grossing four times its budget at the box office. Initial distributor issues caused a delayed release, as well as a sequel.

Two years later Bill and Ted Go to Hell (later renamed Bogus Journey), and the film’s returns were twice its budget. The sequel also spawned a Marvel Comics adaptation (Bill & Ted’s Excellent Comic Book), which paired well with the animated spin-off (Bill & Ted’s Excellent Adventures), voiced in the first season by the main actors. A second spin-off of the same name featured the small-screen live-action adventures of the characters, replaced by all-new actors. One of the most excellent spin-offs was the PC computer game based on the first movie. Back in the day, I really enjoyed playing it on my ancient desktop.

Since 1991, each of the main stars moved onto other bigger and better projects, while thoughts of filming a second sequel seemed to fade away. In the meantime, Alex Winter slowed his acting career while jump-starting his life as a director and Keanu Reeves became a full-fledged action star. Who would have expected either option back in the ’80s?

One of the best elements from the first film is George Carlin’s role as Rufus. Sadly, the comedian/actor had a much smaller role in the sequel. Back then, I felt like the Death character took screen time away from Rufus, which really wasn’t an ideal choice. After the release of the second film, Carlin passed away and the fate of the franchise felt like it was slipping away. Luckily, these characters will return to not only save the world, but the universe. And reportedly, there will be archive footage of Carlin that will join them.

It’s great to hear the band’s getting back together for another hallucinatory slapstick comedy — this time Bill and Ted face middle age and family drama. The actors are joined by original screenwriters Chris Matheson and Ed Solomon, along with Galaxy Quest director Dean Parisot (that’s a great addition to the franchise!).

After watching the film’s final trailer, I do have some concerns. I haven’t watched the Bogus Journey in many years, but I do remember something about “Little Bill” and “Little Ted” and its conclusion. Released during this volatile political climate, it does feel like the film’s writers are trying just a little too hard to be “woke,” retconning the baby boys into girls. Regardless, the film’s writers have claimed the characters were always female, as the baby actors were girls and having a female buddy comedy would not cover the same territory as past films. I’ll let you decide who’s right or wrong in with situation.

Keanu definitely looks old (and a little bored), having shaved his ragged John Wick beard. Is he trying out for a future Severus spin-off? Is Kristen Schall really trying to replace George Carlin? Since it took nearly 30 years to finally get released, could this story have actually been copied in Rick and Morty‘s “Get Schwifty” episode, even though the franchise has around in one format or another for many more years? And since this film will be released On Demand and in theaters during the pandemic, is this really Bill & Ted Save the World? Hopefully its release won’t get delayed yet again.

I’ve got a feeling it’s going to be excellent!