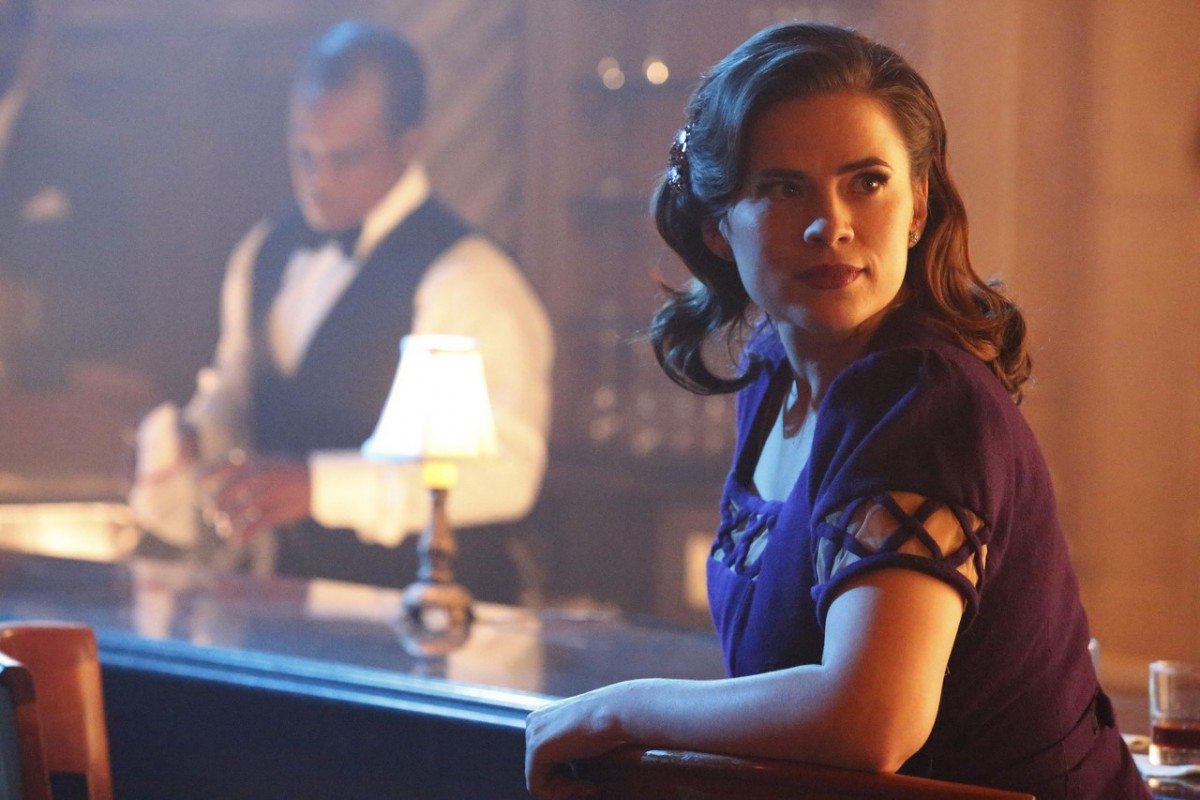 America’s top SSR agent with the red hat is back for Season 2, but this time, she’s the next big thing in Hollywood.

As the first half of the two-hour premiere event opens, the year is 1947 and Daniel Sousa (Enver Gjokaj) recently received a promotion. Opening a West Coast office of the the Strategic Scientific Reserve, the newly minted chief needs assistance working on a high-class case, so Peggy Carter (Hayley Atwell) turns out to be the expendable New York agent. Sent to Los Angeles, she meets up with Edwin Jarvis (James D’Arcy) on loan from Howard Stark, who’s now starting up a movie studio.

In the first episode, The Lady in the Lake, a mysterious dead body is found frozen in a lake during a sweltering heat wave that’s somehow linked to Isodyne Energy, which leads Peggy on a wild goose chase, hunting for clues. Mrs. Ana Jarvis (Lotte Verbeek) is introduced, multiple possible love interests play strong roles in the storyline and an unregistered highly volatile scientific discovery leads to more questions than answers.

In the second half of the season premiere, A View in the Dark, the shadowy Council of Nine shuts down the Isodyne Energy company, hiding all evidence of its secretive atomic testing research. Apparently, the company’s scientists have discovered Zero Matter, which acts much like the Monolith in Marvel’s Agents of S.H.I.E.L.D. The object’s discovery seems to be happening simultaneously throughout both TV shows, but during different decades.

There’s plenty of sexual tension thickly spread throughout both episodes and Whitney Frost (Wynn Everett) hides a powerful secret. As a two-episode season premiere event, the filmmakers of Agent Carter did a great job piquing my interest, making me want to watch more episodes immediately… and all of this happened without the presence of the scene-stealing Howard Stark (Dominic Cooper).

Fan favorite antagonist Dottie Underwood (Bridget Regan) is back and still up to no good, hopefully setting up future storylines to interact with Peggy. Kurtwood Smith makes a brief appearance as a powerful, high-ranking FBI Agent, showing no signs of his true colors. An unknown substance seems to be the MacGuffin which the entire 10-episode season will revolve around while Peggy Carter deals with post-WWII atomic threats during the lead up to Cold War fears.

The sexist comments from Season 1 are thankfully gone, but the replaceable New York SSR characters are sadly still present (who made those previous sexist comments). Why, exactly, are they wasting valuable screen time when neither Peggy nor Sousa are currently their coworkers? Season 1 ultimately introduced the Black Widow and Winter Soldier programs, so what’s in store for the second season of this MCU TV series? How about the first reference of Zero Matter (also known as Darkforce), which ties in neatly to Marvel’s Agents of S.H.I.E.L.D. and the upcoming Doctor Strange movie.

Although Season 2 only takes place one year after Season 1 and takes place on the country’s opposite coast, it already feels like a huge difference from the previous year. After Agent Carter ended last year, we wished aloud that Michael Douglas’ Dr. Hank Pym should make an appearance in Season 2. Sadly, that prediction hasn’t happened yet, but both characters did appear together in a brief scene during last year’s Ant-Man movie, so there’s hope yet that the two characters might actually get to share an old-school adventure together in future episodes. Can’t wait for the next appearance of the Howling Commandos, as well, should they ever make it out to the Left Coast.