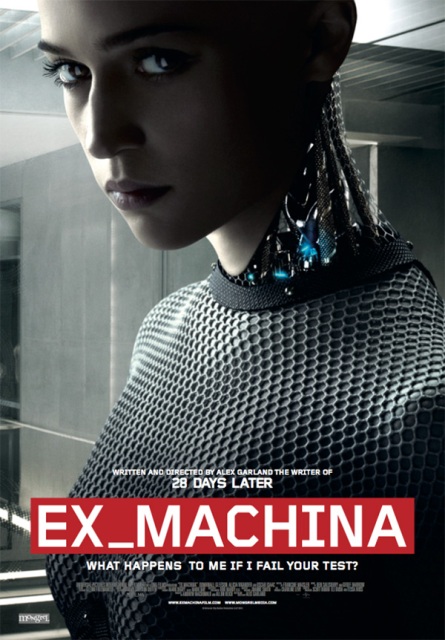 Programmer Caleb Smith (played by Domhnall Gleeson) has been selected by his company to spend the week visiting his secluded employer, Nathan Bateman (Oscar Isaac), in his subterranean mountain lodge. Overwhelmed by his boss’ top-secret project, Caleb is asked to perform the Turing Test on an android with artificial intelligence that actually believes it is human.

Ava looks and acts like a robot, but the fine touches by actress Alicia Vikander (along with the incredible CGI special-effects) may leave you doubting your own beliefs in humanity. Using self-awareness, imagination, manipulation, sexuality and empathy, Ava is a machine that becomes a woman, who manipulates both Caleb and Nathan before the movie’s surprising conclusion. Isn’t technology grand?

Written and directed by Alex Garland, Ex Machina doesn’t feature any action scenes (though there is an outrageously unexpected dance off), but it uses incredible scenery, moody music, nude robots and a little misdirection to keep the viewer fully invested throughout this quick science-fiction thriller. Surely Garland is a fan of both Frankenstein and 2001: A Space Odyssey, since elements of both stories are prominently displayed throughout the movie.

While both recent movies focus on artificial intelligence, Her and Ex Machina are worlds apart. Her is more of a romantic dramedy and Ex Machina could be considered a cautionary tale. Both showcase human nature as an experiment that robots may or may not excel at, but when combined with emotions, their relationships with humans can get technically problematic.

Strength: Great what-if sci-fi story.
Weakness: Not much action or many characters in the story.
WTF Moment: The house is creepy. The TV’s got no connection to the outside world, only cameras showing different rooms around the house.

Notable Quotes:
– “It’s discreetly complicated.”
– “Did you program her to flirt with me?”
– “You shouldn’t trust anything he says.”
– “Is it strange to make something that hates you?”
– “No matter how rich you get, shit goes wrong. You can’t insulate yourself.”