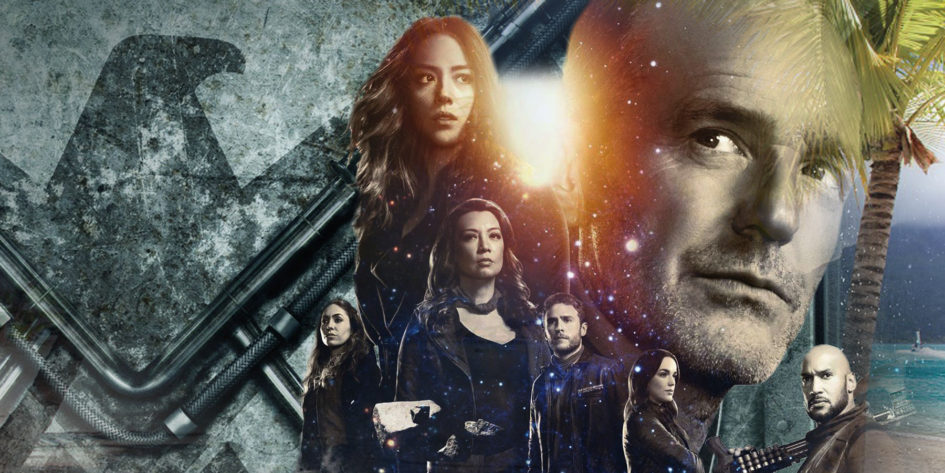 Marvel’s Agents of S.H.I.E.L.D. has clocked in Season 5, and nobody turned to dust. Well, not yet at least. Central characters joined the body-count (sort-of), a sometimes overblown plot line was successfully buttoned up, and the show’s sixth season is on the way, conveniently after the next Avengers film.

Now, don’t worry — you’ll be warned when we dance into total spoiler territory here. But let’s assume you’ve seen at least the whole season so far. The episodes leading up to now are fair game. To that end, let’s recap…

We start off in space, in the future, among the Kree. Basically, half the season plods along in space, with a moderate identity crisis which dances with Star Trek and Doctor Who themes and tone. We meet a few key characters (such as Fitz and Simmons’ future grandson), a future-Fitz who has come to save the day after taking the “slow way” of cryosleeping though time, and work our way back to the present, feet firmly planted on Earth, as the show should be. Talbot assumes the role of a super villain (Graviton), drags an alien ship into the fray, some mentions are made of the pending threat of Thanos and his armies to Earth, and we’re off and running toward a climax.

As the episode plays out, we are teased with various characters’ potential mortality, and the potential ways in which the notion that Daisy causes future-Earth to literally shatter. A battle comes to Chicago on a scale never-before seen in the series, and because of the timing, we have a legitimate idea of why S.H.I.E.L.D. just never seems to call the superhero hotline and bring in some powerful allies — this time, everyone else must be busy in Wakanda. So, it is up to our show’s heroes to save the day.

Now, we can’t keep going without some spoiler action. So, consider yourself warned.

First, there is the Daisy factor. She does a great job kicking ass on Graviton, after handing off leadership to Mack, who owns it like we all knew he would. She launches ol’ Talbot into space to be conveniently put on ice, in case the writers need a swerve later on.

Fitz manages to almost make an escape from the crashed alien vessel, but is mortally wounded. Mack and Fitz share a very vulnerable emotional scene around this, giving our new leader some great heart. We will later be reminded that was only future-Fitz, and current Fitz is floating off in space somewhere, on his own frozen-for-later journey. This is presumably a plot line the show will pick up on in Season 6, assuming he and the icy husk of Graviton don’t collide somewhere.

Coulson has many brushes with death, and his cohorts’ pressures for him to choose self-preservation over heroic expiration — but he chooses well in stashing super-serum in Daisy’s gauntlet for her ultimate “ker-pow” on Talbot-iton. This seals his fate, of course, and the end of the episode takes on a somber and more emotional tone, as the team deposits him in Tahiti to live out his few remaining days — with his newfound (newly acknowledged) love, Melinda May.

Will Coulson inevitably cheat death again? Who knows, but we do know he will appear as his younger self in Captain Marvel next year.

Speaking of next year, that’s where the series will pick up. Marvel and ABC have been praised for their “daring” choice to move the show to summer, but in reality it may be the lazy choice. As good as this finale turned out to be, a true tie-in was missed. The chance to have the events of Infinity War touch the TV side of the MCU was squandered, unless something in Season 6 pops up to prove otherwise.

Self-contained drama is great, and the show should have its own life, but for a season that struggled to keep momentum and traction early on, found what seemed to be a complicated side-story to events too large to ignore (Thanos), and only really delivered in the finale, it seems like a disconnect. While this close to Season 5 was good, the season had to try super-hard to avoid alignment with one of the best advantages Marvel has over DC’s TV offerings — their shared universe.

Many fans would likely appreciate if those shared elements were more than just dialogue and a somewhat melodramatic villain’s need to become part of the events that are largely being ignored.