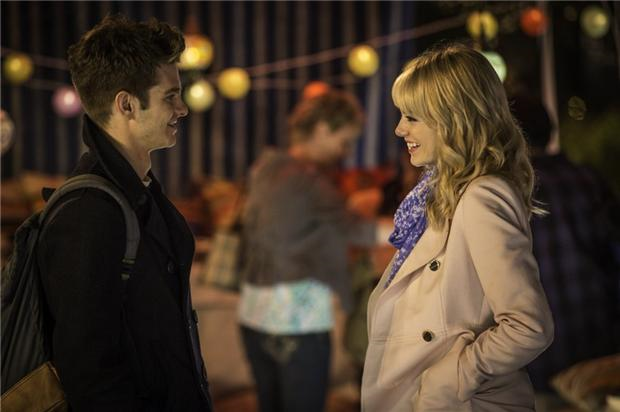 Per Matt
Peter Parker learns the true meaning of becoming a hero As The Amazing Spider-Man 2 swings into theaters.

When you’re having a really bad day, it feels like the whole world is against you. Peter Parker is having one of those days. On his high school graduation day, Peter barely makes his commencement ceremony after foiling a robbery and saving the world. Hoping to protect his girlfriend, Gwen Stacy, he breaks up with her. On top of that, he misses his parents. But before any of those plotlines can be explored, a new menace has been created at Oscorp Industries: the super villain Electro!

That’s a lot of story arcs to explore.

As Electro’s destructive personality ignites New York City, he grabs the attention of a young Harry Osborn. Together, they hope to destroy Spider-Man, along with anybody else who may stand in their way.

Andrew Garfield looks like he’s having a blast playing the role of Spider-Man, constantly keeping the mood light and fun. In his second outing as Peter Parker, his depiction feels more likable than the previous embodiment (Tobey Maguire). Portraying the primary villain, Jamie Foxx does an admirable job. He is excellent as Max Dillon and bits of his personality carry over into Electro. But the true hero of the movie is Gwen Stacy. Although Emma Stone doesn’t get a ton of screen time as Gwen, she shines brightly within every frame.

The special effects are superior and the sound department has done an ultimate job. The movie is incredibly quotable, as there are plenty of one-liners peppered about the many action scenes. As a side note, I was saddened the great “web design” line from the trailers didn’t make the cut.

Much like the complex Spider-Man hero, Director Marc Webb attempts to balance a storyline that seems to pull in multiple directions. There’s a lot going on in this movie, including Electro’s backstory, exploring the mysterious death of Peter’s parents, bringing Harry Osborn into the fold, introducing The Sinister Six and not being afraid to stand up for what you believe in. It’s enough to make your head spin.

Although his final battle is epic, the audience never gets a full taste of Electro. By the way, why is he so upset with Spider-Man, anyway? (Does it all really boil down to the superhero forgetting his name?) I would’ve preferred Electro to be the primary focus of this movie and temporarily holding the side stories. New to the big screen, Electro’s characterization seems to borrow attributes of Magneto (of The X-Men) and Dr. Manhattan (of Watchmen fame). The grand finale feels like an epic boss battle torn from the Spider-Man: Shattered Dimensions video game, playing before our eyes. Shocking, indeed.

With that being said, The Amazing Spider-Man 2 is Spectacular.

Overall, Marc Webb’s second installment of the rebooted Spider-Man franchise is more enjoyable than his first, setting up many future sequels. I’m particularly interested in the upcoming Sinister Six story.