American Gods: The Devil’s in the Details (But Not in The Bone Orchard) 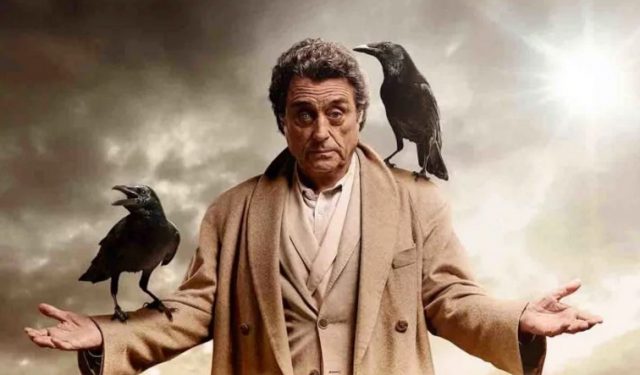 Here’s a question: How do you convert a character created in a written medium to one expressed in a visual medium? How do you adapt to this new medium if the character is known to be quiet and reserved, to a degree, that often unsettles other characters? Our protagonist in American Gods is just such a character. His internal monologue is half of what makes the book by the same name so engrossing. As Mr. Wednesday mentions in the first episode, Shadow is a smart man who would rather people believe him dumb. But can this make for an interesting TV character? So far, American Gods says, “Yes.”

I’ve seen plenty of adaptations that rely on fan interest to keep them going, and it makes them lazy. The first episode, titled The Bone Orchard, of American Gods, is most definitely not lazy. From the beginning, the writers’ fearlessness and comfort with the material feels apparent, as they open to an eclectic, dark and appropriate cover of Led Zeppelin’s “Immigrant Song,” and then move quickly into a little intro full of Vikings and blood sacrifice. I won’t go into many spoilers, story wise, in case not every one has seen the episode yet. I will state, however, that I am very impressed by the directing and writing in this episode. They play with the story a little, albeit tastefully, as I’m sure they’ll do more and more, but they also aren’t afraid to follow the most surreal and insane moments of the book.

This commitment and creativity allows the always-calm Shadow Moon to remain, for the most part, the stoic figure he is in the book. Instead of his internal monologue, the viewer feels his anxiety and fear in well-timed, dark-toned music compositions and troubled scowls from the quietly charismatic Ricky Whittle. What could easily be a boring man of few words and too many scowls instead feels like just the right amounts of enigmatic toughness and empathy. And speaking of enigmatic, Ian McShane plays a perfectly charming asshole as Mr. Wednesday.

If I had any gripes, it might be that the first episode felt a little too busy. Of course, this could just as well be the surreal and mysterious nature of the story. We are given the impression that a lot is going on here, and that Shadow has been dropped into the middle of it due to a random tragedy and misfortune. At the same time, we know this is a story. We know there’s a reason this character was chosen, and so the viewer, just like Shadow, feels there must be a point to all this without having any good reason for thinking as much. Appropriately, there is a dreamlike feeling pervading the episode, as new things and old things mix together and create a surreal but oddly rundown world. It seems American Gods asks for your belief as much as any of its divine characters and I have to confess that, for now, I’m a believer.