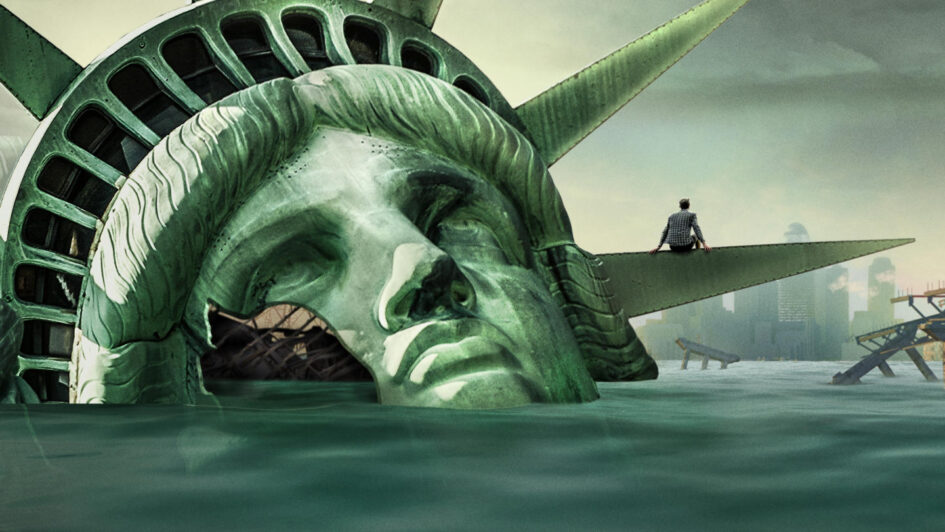 Per Matt
A man walks into a bar in Louisiana and asks for a Corona and two hurricanes. The bartended replies, “That’ll be $20.20.”

That dad joke was pretty bad, so please accept my sincere apologies for the lame attempt at humor. It may not have been the greatest way to sum up the year so far, but when you realize the combination of a global pandemic, multiple hurricanes currently hurtling toward Texas and Louisiana within the next couple of days, along with murder hornets, and now an impending six-foot asteroid that’s projected to impact with the planet in the not-too-distant future, every time a major catastrophe feels like it couldn’t get any worse, Mother Nature quickly responds with, “Hold my beer.”

That’s why I was initially interested in watching Apocalypse Earth, which is a weather catastrophe TV series that feels like a series of documentaries airing on the History Channel. The first TV special featured volcanoes, while the second one highlighted tornadoes and the third one, which most recently aired, had earthquakes squarely centered in the spotlight.

Life-threatening nightmares are re-told through survivor stories, as their real-life terror is remembered through a series of recreations and actual footage caught on film (as well as the photographed results). The path of destruction depicted from these mega disasters is severe. Midwestern towns and cities of the Western United States seemingly know these horrors the best. Tornado Alley didn’t get its nickname from a series of small storms. The affected states received their nickname from the superstorm cells that frequently formulate there. And what about the waterspouts that form whenever tornadoes cross wet environments? That’s even scarier.

“The randomness of it… is startling.”

The earthquakes were a little more interesting than all the rest, as the tornado stories were a little more dry. Having survived a handful of hurricanes during the time I lived in Florida and a couple of noticeable house shakes while living in California, I can totally empathize others who have experienced similar conditions. They are unexpected, although earthquakes in Southern California have been occurring for hundreds of millions of years, giving rise to their mountains (or hills, as the locals call them). I was more interested to learn more about the Ring of Fire, which extends to 25,000 miles, where 90 percent of the world’s earthquakes take place.

Meteorologists, seismologists, geophysicists, structural engineers and “severe weather experts” give their opinions of past events and bring professional observations to the personal stories detailing the disasters these people experienced. The next episode explores the possibilities of an upcoming ice age for planet Earth, which may be the most interesting one yet.

I’ve really enjoyed watching a bunch of documentaries these last few years and it helps that I’m a member of the Music City Film Critics’ Association — there’s plenty for me to see out there — but disaster movies featuring extreme weather have always been a genre that I’ve enjoyed watching, which feels similar to this show. In no way am I trying to seem flippant toward past or future disasters that have occurred throughout the country, and I hope those affected by the storms don’t suffer much loss. Where there’s a will, there’s a way. And we will get through these events.

Whether they’re killer twisters, hurricanes, earthquakes or even a possible future ice age, planet Earth has managed to survive plenty of impending dooms. And together, we will manage to pick ourselves up out of the rubble to live yet another day.