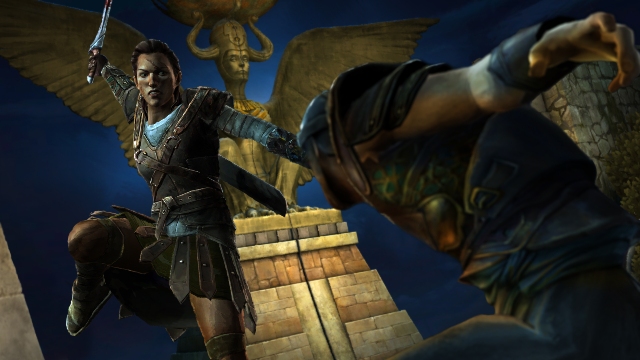 Winter is coming to Game of Thrones.

So much has happened since the first episode of this Telltale Games series.

Catching Up:
A traitor lies within the council, old tales of a secret forest, a broken-off betrothal, Beskha has unfinished business, a dragon has a fiery temper and a soldier is willing to go to great heights for getting revenge at The Wall.

As Episode Four: Sons of Winter begins, there are four ongoing storylines taking place:
– Gared Tuttle escapes Castle Black — along with two other outcast rangers — in order to escape his pending execution. The trio later gets an unexpected escort as they seek passage to the North Grove.

– Daenerys Targaryen questions Asher’s integrity when he discusses the past actions of her dragon (while being hunted by the Lost Legion). Hoping to gain favor with the Dragon Mother, Asher and Beskha receive a side mission to storm Meereen with the Second Sons, in order to save his family.

– Back at Ironwood Grove, Lady Elaena and her brother ask Rodrick Forrester for a favor. Does everybody in this blasted game NEED one? Hoping to avoid an arranged marriage, Rodrick agrees. He takes back control of his own house, makes a deal with the devil and discovers an uninvited house guest awaiting him (along with his family and friends missing). Quite a busy day for him.

– Mira Forrester seeks the help of another handmaiden, trying to uncover Lord Whitehill’s conspiracy against her family. At Tommen’s coronation, she finally stands up for herself. I actually enjoyed her bit for the first time in this video game series.

There are many highs and lows spread about Episode Four. Kidnapping, blackmailing and double-crossing, oh my! Although I’m still unsure who the ravens are, I’m most interested in the three escapees surveying the property beyond The Wall. My favorite characters are still Asher and Beskha. Ryon Forrester wins the most-annoying-character award, while Lord Whitehill is the most hated of the baddies.

Sadly, I had quite a few glitches while playing this episode. There were some voice glitches, where the characters would temporarily stop talking, then immediately overlap with other character’s dialogue. There were also a few flickering graphical glitches, as well.

All of the achievements and trophies for this episode are story related and unmissable.

With only two episodes remaining to wrap up Season 1, each of the storylines are really getting good. I’m looking forward to resolving many of the related conflicts before winter finally arrives for ALL of the characters featured in this game.

Strength: Select story elements are incredible.
Weakness: Had to replay a certain scenario several times, constantly getting hung up.
WTF Moment: Makes no sense for Gared et al. to not search the fallen wildlings’ bodies for food, weapons or clothing after defeating them in battle and attempting to survive a harsh environment.

Notable Quotes:
– “Would you like to touch him?”
– “That arrogant, pig-eyed prick!”
– “Help very often means money.”
– “Quit your whimpering. I’m not dead yet.”
– “Long time since we’ve had a piss bucket.”
– “Show them the hell they have made here.”
– “What is that stuff? It smells like sick cow.”
– “Don’t tell me you’re afraid of a handmaiden.”
– “Your tongue is dangerously sharp, sellsword.”
– “I’m not going to be some prize for him to rip open.”
– “That subject isn’t fit for your delicate ears, anyway.”
– “Won’t be alone for long. The axeman will find you soon enough.”