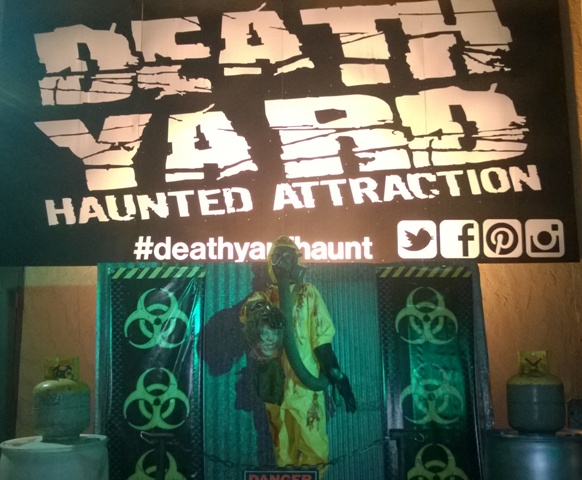 Per Matt
Evil entities are afoot at the Death Yard Haunted Attraction!

With its grand opening on Friday, September 19th, the greater Nashville area welcomes one of its newest haunted attractions to the general public. For the 2014 haunt season, attendees follow multiple evil entities, large and small, from the spirit world and beyond and hope to escape the clutches of evil alive.

Last week, I attended the first-annual Media Night at Death Yard and got to experience the terror firsthand. There are many tormented spirits on hand, many of which have experienced a horrific past and intend to take out their aggressions on the mortal world.

While I don’t want to spoil the experience, I really enjoyed the highly detailed sets. I wasn’t expecting so many obstacles, which I loved, by the way. I really enjoyed walking through the graveyard scene, but the fog was extra thick, which can be a big problem for asthma and allergy sufferers (like myself). The vampires of Vampír Cabaret and the Nazi Zombies of World War Dead were enjoyable, but whatever you do, don’t press the button!

It’s clear that co-owner Carroll Moore is passionate about creating an spooky, immersive environment, which is obviously on display in every scene. Previewing the event, I interviewed Mr. Moore to discuss his background, to learn about the origins of the haunted house and to promote his unique breast-cancer awareness campaign for haunted attractions.

How did you get your start in the haunted attraction industry?
– “Well, I wanted to be a horror-movie director, originally, and then I realized that’s going to be pretty difficult. So, I decided to build things that people could experience. Like, if I wanted to people to feel a touch or a smell or the cold, I could actually create something and let them walk through that and experience it.”

“I got my start in 2006, with my business partner. We did a local attraction. That’s pretty much how we got our start.”

Tell me a little about your haunt from last year.
– “Last year we did Dark Descent at Nashville Nightmare. The guys over there were very gracious. They had some extra space, over there… we kind of worked out a deal. We did well enough with that attraction to purchase Gore House, which is what Death Yard is now, located in Hendersonville. We were very fortunate for last year.” 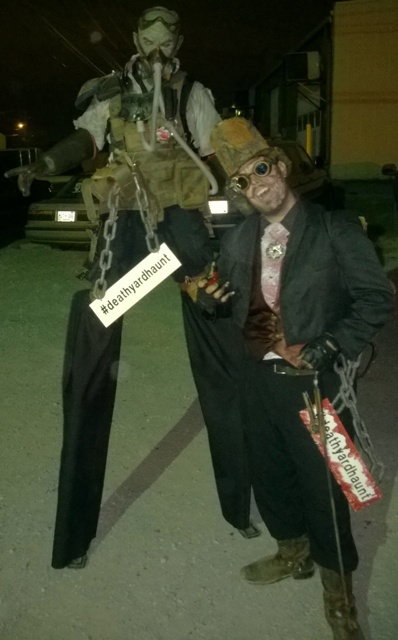 Can you give me an overview of the 2014 storyline?
– “Basically, you can enter the horror facility and encounter each spirit entity that we have conjured up and put inside the Death Yard, for mortals to witness. We have Nazi Zombies, we have regular Zombies… you name it, we’ve got it, so come check it out.”

Looking forward, do you plan to introduce new spirits into the overall storyline?
– “Yeah. Every year, we’re going to hit up the horror-facility theme. I like it so far. I may change my mind by next year, but we have the opportunity to bring in another spirit or entity. We may even do a separate attraction. With my business partner, Brandon Brinkley, we’ll start planning in November. We’ve got a great staff here and a great cast. We all kind of pitch in ideas and try to create something that nobody’s seen before. That’s what we’re trying to do here, this year. The market’s getting saturated — that’s not a bad thing, necessarily — but we really want to do things that nobody else is doing.”

Some of my favorite scenes involve homages. I’ll leave it at that.
– “Yeah. We have a little bit of everything for everybody. We go from the very mundane to the crazy, off-the-charts maybe-not-suitable-for-anybody-under-17 kind of things.”

Can you tell me a little about your spooky graveyard scene?
– “We call that The Catacombs. I’ve always wanted to see a lot of vines and an overgrown cemetery, like a crypt. You kind of recess down into the fog. It works very well, so far.”

What would you say is your favorite horror movie?
– “Wow. I don’t know if it’s considered a horror movie, but Jaws is up there. I mean, I love Freddy Kruger and Jason Voorhees, those are my favorites, when it comes to slashers, but Jaws is definitely up there.”

Growing up, what did Halloween mean to you?
– “It meant candy, of course. Trying to convince my mom to get a certain costume and she always decided against what I wanted to do. I don’t know how many years I wanted to be Freddy Kruger. Finally, she let me do it one year, but it still wasn’t what I wanted.”

“Halloween has always been a fun time and has created a passion that’s hopefully turned into something that’s going to be profitable and something that I can keep doing, for years to come.” 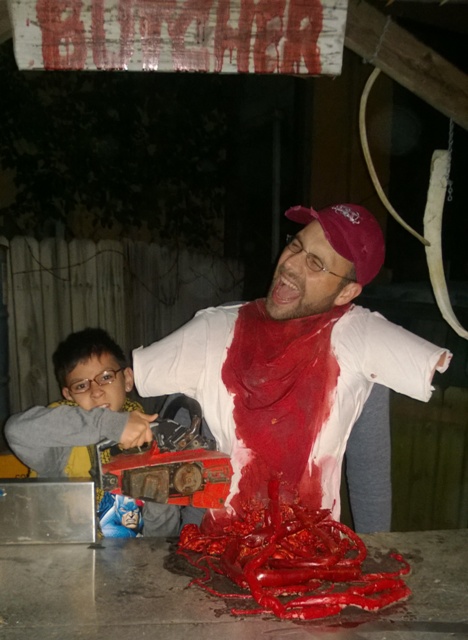 Will Death Yard be open on Halloween?
– “Yes. We’re going to be open on Friday, Halloween night and we’ll leave it open through Saturday, November 1st. That way, people who party their asses off can come on down and check us out the night after Halloween.”

Will you be giving out candy on Halloween?
– “We’re going to try to. We did that at Dark Descent, last year. It went fast. It’s going to be first come, first served.”

You’ve got a unique charity involved with Death Yard. Can you tell me a little about it?
– “I thought up an idea of Haunt Pink Awareness and I went over it with my girlfriend, who is really into breast cancer awareness. October is Breast Cancer Awareness Month, so we decided to use the haunted house to spread awareness for that. Every year, we pick a recipient and we sell shirts that have her name on it with different sponsors. With every shirt we sell, all the proceeds go directly to her.”

“From September through October, we’re going to be selling these shirts. Hopefully, we’ll sell out quick and get a second batch in. We’re also taking donations, as well. We’re going to try to make things like that bigger and better, each year.”

Is there anything else you’d like to add?
– “We have an app on the Apple Store and the Google Play store, Death Yard Haunted Attraction, where you can buy your tickets, check out our Instagram and Facebook and find anything you want to know about Death Yard, you can find on the app. It’s free, so go download that right now. Now we’re giving passes away, weekly. So, if you want free passes, hit us up on Facebook, Twitter and Instagram. We’re $13, which is the cheapest in town and we’re even doing $10 on Sundays in October. You can’t beat that. This is the best haunt value around.”

Death Haunt definitely needs to be on your list for haunted attractions to attend this year. And when you visit, make sure to take a picture at their great themed photo-op and introduce yourself to the Butcher!