Per Matt
Rancher Thanos had a midlife crisis and headed out West. The new season of Yellowstone sure looks different, somehow. This is the Cowboys & Aliens people actually wanted to see!

I’ve read the online jokes and chuckled at many of the comments, but there was something that drew me into Amazon’s sci-fi Western, Outer Range, that truly screamed this show was different from the rest. After watching two episodes, I agree. And I’m hooked.

At the center of this series is a genre-bending mystery, which itself is multi-layered.

Josh Brolin portrays Royal Abbott, the family patriarch living on a Wyoming ranch. As we’re introduced to Royal, something strange has caught his attention. While a family member is missing and the neighbors are disputing property lines, odd noises have affected his horses and he’s apparently lost a certain amount of time.

Then a strange girl appears with cash, hoping to buy the property. But the biggest thing he must deal with is the bottomless hole that’s existence seems impossible, and impossibly, it’s there on his land.

How are each of these story elements intertwined? The answer may be simply linked to the term, “void.” As a definition, the word denotes a completely empty space or something that is not legally binding. It’s a word that that explains a vague area that doesn’t have a lot of details, much like the randomly large hole that arrived overnight on their property.

Like the law that may have been misinterpreted during the drawing of property lines many years ago. Like the lost childhood memories of hippy Autumn (played by Imogen Poots) and the inexplicable attraction that has drawn her to this location. Like the missing people on both sides of the disputed lines, whose absence brings a darkness to both families. And the apparent death of a neighbor that may have happened in a drunken dispute, as judgement has not yet been cast. 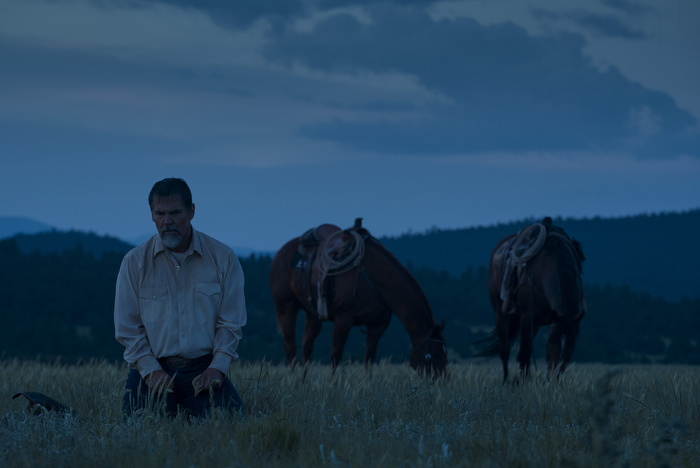 In the simplest terms, the Abbott family is portrayed as a Christian family with morals vs. the nearby Tillersons, who might just be ruthlessly rich, since they “never lose,” led by the indefatigable Will Patton — who plays a great antagonist (Where’s he been hiding all these years?). The endgame is near, so let’s get ready to rumble!

“It’s Wyoming, Royal. It’s only ever been stolen, since it got its name…”

Fate seems to have been particularly harsh for the Abbotts and the Sheriff-elect may not be playing by the rules. While it looks like all these troubles are insurmountable for the family, Royal seeks guidance… but he doesn’t want them to get implicated if they’re charged with a crime.

As a character, so far, he seems like the strong-but-silent type. He’s tough with a good work ethic, but he’s also incredibly non communicative about his feelings. While he doesn’t want to tell his family his troubles, he definitely doesn’t want to lose his property, which has been owned by the family for three generations. What’s a family man to do?

The sci-fi aspect was my initial attraction to the show. Smartly, after watching only two episodes, the filmmakers have included this odd hole with different aspects of the developing plots, while not revealing too much about it. In fact, there haven’t been any details given, really, about it other than touching it allows you to briefly see into the future and if you get pushed into it, you may not remember where you went or how you returned.

There’s also a creepy, possibly magical bison with arrows stuck in its side that randomly appears, as Outer Range attempts to get strange (David Cronenberg is still the master of the weird domain.)

The mystery of the family’s brand is also a topic of concern. What does it symbolize and why did it draw Autumn to the land?

A few years ago, a bottomless hole was a trendy topic on Coast to Coast AM, although I can’t remember if it was ever debunked. The idea fascinated me. Living in the country, there’s plenty of things that go bump in the night, but that’s one thing I’ve never encountered. The mystery of the hole feels a lot like LOST, but all of the small-town conning of each other reminds me a tad of the EPIX show, Perpetual Grace, LTD. The Western elements are probably my favorite aspects of it, though.

What kind of answers will be revealed? What’s with the mystery of the dead body? What about the camper? Where’s the missing woman? And will someone please provide some sort of details about the white elephant in the room? How exactly will that big ole hole influence the Abbott’s property taxes? Inquiring minds want to know!