Doctor Strange in the Multiverse of Madness Checks All the Boxes

If you know me, you know that I have a taste for action movies and horror flicks. A few times in history these genres have overlapped with one another. Even fewer have been successful. Most of the time, horror-action films are produced by a few well-known studios, like Universal, Sony, MGM and Warner Bros. and some of the better crossovers are Underworld, The Predator, The Terminator and The Purge.

People expect to see blood, guts and violence. These studios are synonymous with chills and thrills. Unlike the House of the Mouse, these studios pull no punches when it comes to tense situations that may have horrific outcomes.

But now, Disney seems to have removed the kiddie gloves, if only for this one time.

Doctor Strange in the Multiverse of Madness is the latest film in the Marvel Cinematic Universe. Taking place after the events of Spider-Man: No Way Home, the multiverse is splintered.

A teenager named America Chavez (Xochitl Gomez) finds herself with the ability to travel the multiverse through a power she cannot control. Pursued by demonic monsters, America is saved by our planet’s (Earth-616 as we find out later) version of Doctor Strange (Benedict Cumberbatch) and Sorcerer Supreme Wong (Benedict Wong).

After seeking counsel with Wanda Maximoff (Elizabeth Olsen), Strange realizes that the demons are under the control of Wanda’s evil half. Using the powers of the Darkhold, the Scarlet Witch will do anything to be with her children, Billy (Julian Hillard) and Tommy (Jett Klyne), even as far as destroying anything and anyone in her way.

What sacrifices will Doctor Strange, Wong and America be willing to take to stop her? 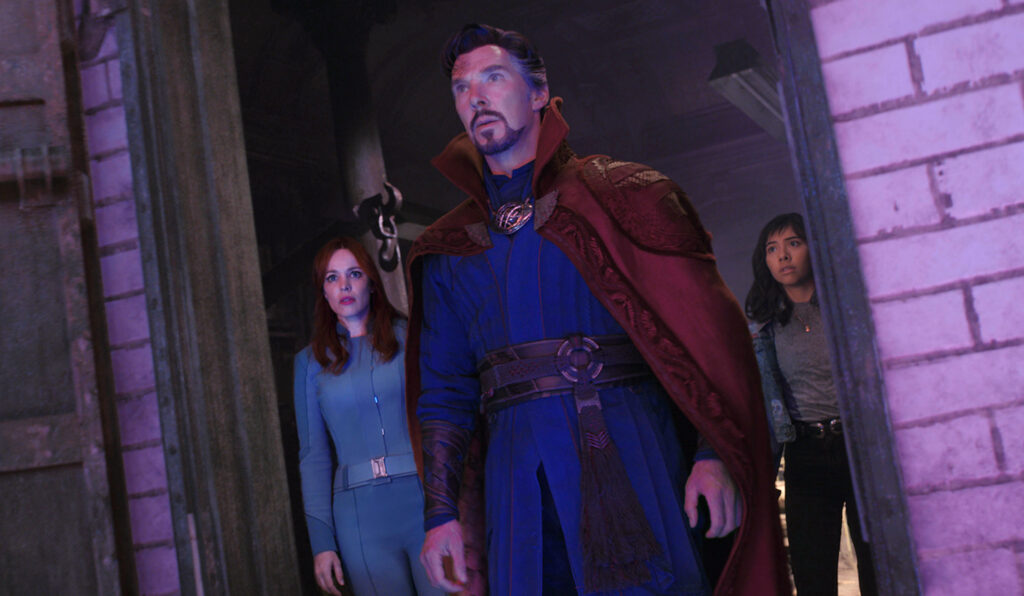 That synopsis is about as spoiler free as I can get. Honestly, I have so many things to talk about that would give away huge portions of the film. There are cameos from Marvel characters we have never seen in the MCU before. There are Easter eggs in the multiverse scenes. There are musical scores in the film that have a deeper meaning than just background music. And can we talk about some of the fights in the film? Especially the one that involves musical notes?

All these things I want to explore, but for the sake of people who don’t want spoilers, I will keep this review as generic as I can.

Doctor Strange in the Multiverse of Madness is unlike any other film in the MCU. Even though it is a dark film, it is filled with everything we come to expect from the MCU. Stephen Strange is still pining after Christine Palmer (Rachel McAdams), even though the Earth-616 version had a falling out with her, giving us a love-interest angle.

With his deep-rooted sarcasm and wit, Doctor Strange and Wong provide banter that flows naturally while delivering fun punchlines. And of course, we have fights and battles, like in all previous MCU films. But the Multiverse of Madness adds something we rarely see from Disney: Blood and extreme violence.

When I say blood and violence, I am not exaggerating. The film pulls no punches. There is blood. There is violence. Director Sam Raimi brings his experience with the horror genre to the multiverse. Having movies such as Evil Dead, Army of Darkness and Drag Me to Hell, along with the Sony Spider-Man films and Darkman on his resume, Raimi is skilled at blending the two genres together.

So, while we have had epic fights and struggles in previous Marvel films, we have never seen superheroes get violently injured. The PG-13 rating of the movie is well earned, and honestly could even be considered R-rated by the more conservative viewers. Keep that in mind when planning a family film excursion.

For me, though, Doctor Strange in the Multiverse of Madness is the best MCU film since Avengers: End Game. Those two films are neck and neck in being the best in this writer’s opinion.

And as you can tell, I am going to give this movie a perfect five-star rating. It’s a must-see film. It adds the horror element that Disney rarely embraces, while blending it with the world they have created flawlessly.

It is rare, but I have to say that this film is perfect in every way.