The COVID pandemic has destroyed the massive profits that Hollywood has raked in over the past decade. Looking back at 2019, the domestic box office for just the Top 100 films of the year panned out to just under $10 billion dollars. And yes, that is just domestic. That does not count the international revenue that came in, as well. So, contrast that to 2020: The year of lockdowns. The total domestic box office for the Top 100 films of the year was $1.2 billion. That is a 90 percent drop in revenue. That money is the fuel for the biggest films. Without it, big-budget blockbusters may be lacking for the next few years.

Lucky for us, Godzilla vs. Kong was completed in 2019. Warner Bros. had originally penned the titan battle to open in theaters in November 2020. But as we all know, a certain virus changed those plans. With one of the top theater chains in the United States closed down (Regal) and many movie-goers weary of being enclosed with others, the decision was made to release the film to streaming sites in addition to the still-operating theaters. After a bid from Netflix in the range of $250 million, WarnerMedia blocked the deal and awarded the streaming rights to its own platform, HBO Max. Normally, this kind of information means little to me. But I find it fascinating just how COVID has changed the mindsets of the studios.

With the delays and the inability for many to see it on the big screen, you would think Godzilla vs. Kong would suffer. But is that the case? Did this epic film live up to the hype that it generated? You know I am going to tell you my thoughts on that.

Godzilla vs. Kong starts out with Kong living in a secure observation dome that Monarch has placed around Skull Island. Across the world from him, Bernie Hayes (Brian Tyree Henry) has a job for Apex Cybernetics, a company working on tapping into the energies of the Hollow Earth: the realm that Godzilla and Kong came from. However, without warning, Godzilla attacks the facility. Desperate to tap into the energies of the Hollow Earth, Apex CEO Walter Simmons (Demián Bichir) hires Dr. Nathan Lind (Alexander Skarsgård) to find a way to reach this world. Lind reaches out to Dr. Ilene Andrews (Rebecca Hall), the Monarch scientist in charge of working with King Kong. Little do they know that Simmons’ plan for the power is to charge his own monstrous creation.

Taking Kong from his Skull Island home, the doctors believe that the furry titan can guide them through the Hollow Earth to find the power source. But their plans are interrupted by attacks from Godzilla. It seems that the Thunder Lizard is hell-bent on stopping anyone or anything tapping into the power. With humanity powerless against the might of the king of monsters, only Kong stands between them as annihilation. 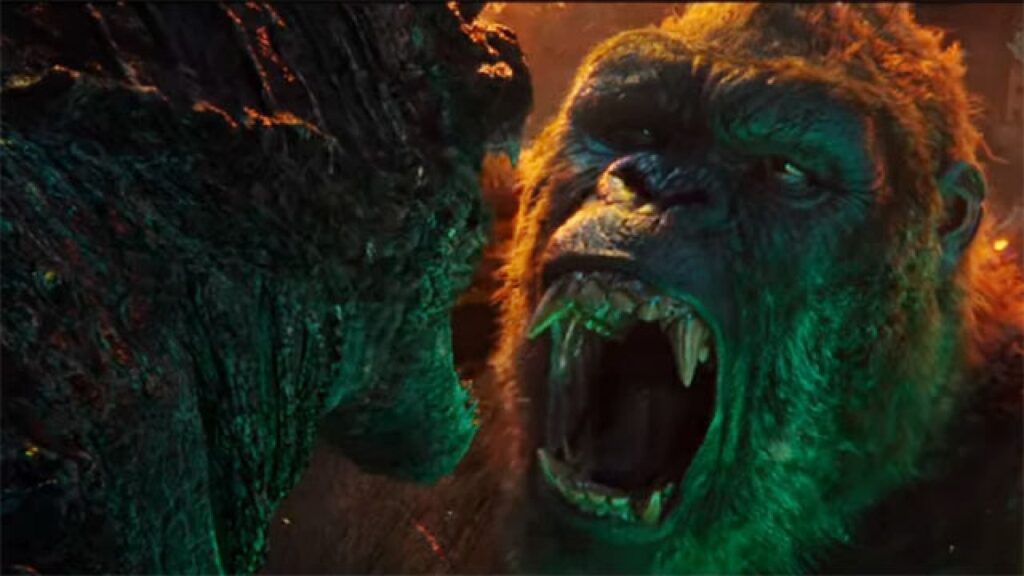 I have seen many, many movies that are predecessors for the MonsterVerse (reviews HERE, HERE and HERE. The first film I ever watched on cable TV was the 1933 King Kong. From that moment, I was hooked on not only Kong, but Godzilla as well. Something about giant monsters wrecking carnage through a city is totally awesome. I started seeking out the Godzilla films, as it seemed there were so many more of them, in comparison to Kong. Godzilla was the real savior of humankind in his films. He stopped threats like Ghidorah, Mechagodzilla and Rodan. I always looked at Godzilla as a kid with an ant farm. The ants are not a real threat to the kid, but he protects them out of a sense of love or duty. I doubt Godzilla “loved” any of the humans he protected, but was more like following his own code of honor. Maybe that is why I chose to be on Team Godzilla in the build up for Godzilla vs. Kong.

If you followed those links, you probably saw my poor review of Godzilla: King of the Monsters. And if I was not a fan of that film, would it affect Godzilla vs. Kong? The answer is an emphatic no. The main thing I hated about Godzilla: King of the Monsters was that the sheer number of titans in the film diluted the battles. I didn’t want to see monsters tag teaming on Godzilla. With Godzilla vs. Kong, the filmmakers corrected this. While there was a third threat in the film (not going to spoil it), this ringer was neutral. It attacked both Kong and Godzilla, and gave them a run for their money. It was the perfect epic battle that left both monsters in a vulnerable state that could spell their doom.

Another problem I had with the previous Godzilla film was the attention given to the humans. I honestly did not care much for any of them. In Godzilla vs. Kong, it is almost like the humans are just there to get the titans together, so they can fight. The little moments we had getting backstories on the characters was fine. In fact, the Monarch team gave Kong a purpose to fight. He did not want them to die, and took on the role of protector. Thus, humans gave Kong meaning, and gave Godzilla angst. I am so glad they gave us what we wanted: big monsters in big fights.

I give Godzilla vs. Kong five out of five stars. And don’t just take my opinion. The film has only been open for two weeks and has placed No. 1 in the domestic box office, raking in $280 million. In comparison, the next closest release is Disney’s Raya and the Last Dragon, which has raked in only $32 million. These spectacular numbers makes Godzilla vs. Kong the highest box-office film in over 10 months for Hollywood. That is a plus for the struggling industry.

Will this be a sign of the nearing end of the COVID pandemic? I certainly hope so. But I fear that 2022 will be a less-than-stellar year for films. Hollywood will have to make big movies quickly in order to recover from the downtime. But I have always believed in movie magic. Let’s hope there is more to come.