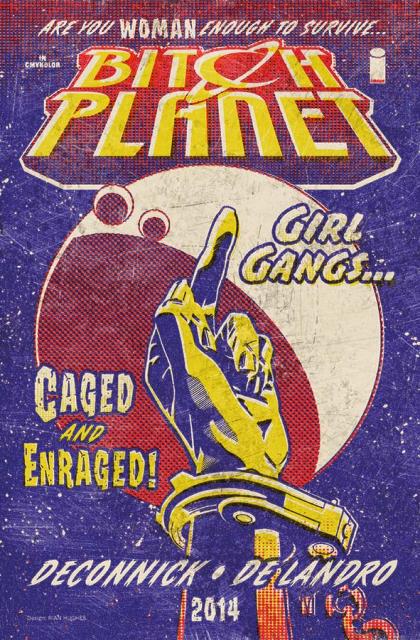 I started reading Bitch Planet out of curiosity and discovered a guidebook on how to better prepare my 2-year-old daughter for real life.

Kelly Sue DeConnick and Valentine De Landro’s latest comic book bills itself a women in prison sci-fi exploitation riff. The hyperbolic world of Bitch Planet is just a few parallel earths away from ours. Non-compliant women are sent to an “auxiliary compliance outpost” — the Bitch Planet — segregating themselves from the rest of the male-centric Earth. Non-compliance is considered anything disobedient, whether it be talking back to a man or not meeting idealistic physical attractiveness. Behavior outside the realm of Stepford Wife is unacceptable.

Underneath all the violence and middle-finger waving is social commentary about misogynistic oppression not far from our own. The story delivers like a sledgehammer, but cuts like a scalpel. The ideas sit and itch at the subconscious brain, forcing one to consider gender inequalities many readers may have never considered.

DeConnick builds a fantastic and disturbing universe. The characters have great depth, hinted at throughout the first three issues. There’s an underlying story weaving the prisoners’ tales with the state sponsored religiously-required sports viewing of duemila, the universe’s equivalent to the NFL. Each issue reveals how the world came to be and where the characters hope to take it, or subvert it, at a satisfying pace.

The art and coloring are brilliant. De Landro’s characters are vivid and unique as is the sci-fi futuristic world. The prisoners are from all walks of life, each with a physical personality all their own. It is refreshing to see realistic female body types in a comic book. He weaves a fine balance between the advertisement/propaganda Earth and the violence of the prison planet.

The illustrations of men are especially frightening and familiar. They are the dozens of well-off talking heads, seen on nightly news television. They are the crusty white guys, telling everyone how to live their lives, yet violating that same advice, scandal after scandal. Except here, there is no consequence to this all-boys club.

Cris Peters’s coloring is spectacular. There is something retro-futuristic and compliantly inducing hypnotic about the dot-pattern coloring and backgrounds. I was particularly impressed by the use of a more pronounced 4-color dot scheme evoking Roy Lichtenstein’s pop-art female figures. The Lichtenstein nod is especially nice contrasting the comic book-idealized females against the non-compliants, especially when used to tell Penny Rolle’s backstory in issue #3.

Included at the end of each issue is a feminist-themed essay. The essays struck me the most and elevate this comic book to a literary work inspiring social change and awareness. I do not recall a comic incorporating essays to enlighten the readers. The essays are thought provoking and encourage a reconsideration to the social norm. They are a grounded complement to the fantastic tale.

I feel I am a more-informed father after reading Bitch Planet. I’m Sarah Connor now, as I prepare my 2-year-old daughter for the misogynist Terminators and Skynets of this world. Bitch Planet is helping me to identify those dangers and delivering an entertaining story that I look forward to every month.