Dwayne Johnson is one of the biggest stars in Hollywood today. I remember as a teenager watching him take on wrestling giants like Stone Cold Steve Austin, The Undertaker and Triple H. Now, he takes on critics, toxic fans and the media in all-out brawls. Regardless, he has conquered two massive industries that require the ability to act.

His latest passion project to come to fruition is his adaptation of the DC Comics character Black Adam. Even though I like to think of myself as a comic book fan, Black Adam was never one of the characters I really cared about. I didn’t read any stories with him in it, and just felt he was one of the multitudes of low-fame characters in the comic-verse. Pretty much all I knew was that he was kinda like the anti-Shazam: an evil version of the naive hero. However, with The Rock playing the titular character, I had hopes that it would be a decent film, even if I knew little of the backstory.

Black Adam begins in ancient Kahndaq. King Ahk-ton had a powerful crown fashioned with the powers of demons. However, a young slave was endowed with the powers of Shazam, and this superbeing was known as Teth Adam (Dwayne Johnson). Just as the king was about to place the crown on his own head and gain the powers, Teth showed up and in the ensuing battle the king was killed and Teth disappeared. His legend carried on among the people, up to the present.

In the present day, an organization called Intergang runs the country. Adrianna Tomaz (Sarah Shahi) is an archaeologist searching for the crown. Just as she finds it, Intergang finds them and, with her life on the line, she summons Teth Adam by reciting the inscription on the tomb.

Teth proceeds to kill all the Intergang cronies, but their leader, Ishmael (Marwan Kenzari), survives. Knowing if Intergang gets the crown, Ishmael will become unstoppable. Adrianna and her son, Amon (Bodhi Sabongui), plead for Adam to help stop them, but the super-powered being is not a hero.

Now released from his tomb, Teth Adam takes on anyone he deems necessary in his plans for revenge, including the Justice Society of America members Hawkman (Aldis Hodge), Dr. Fate (Pierce Brosnan), Cyclone (Quintessa Swindell) and Atom Smasher (Noah Centineo). 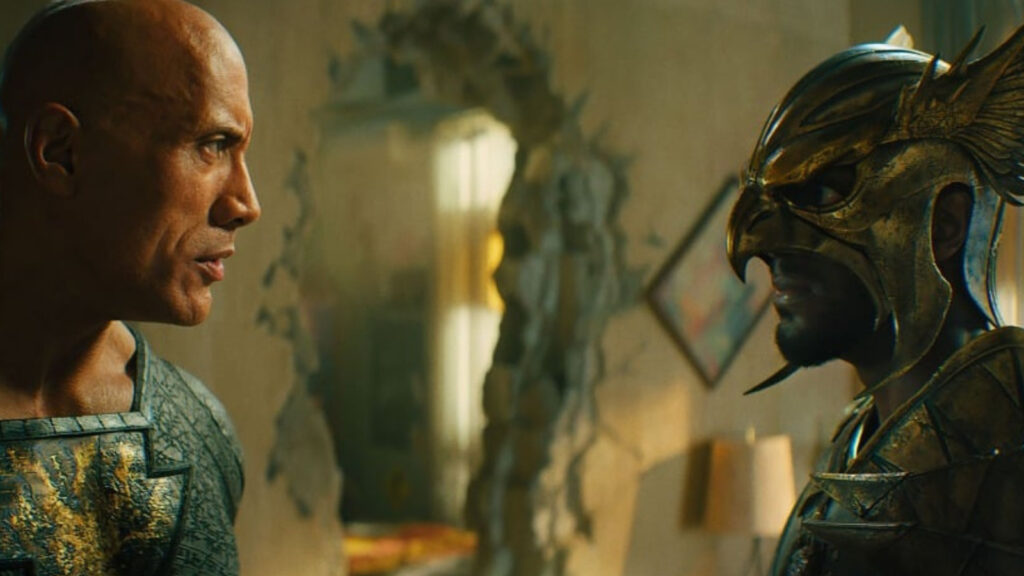 Black Adam was a labor of love for Dwayne. It took the Hollywood megastar 15 years to get his project to the silver screen. One would think that with that long a time to wait, much of the story would have been muddled down to the tried-and-true storylines that many comic book-inspired films of today feel. But Black Adam does not disappoint. The character is dark and brooding, like Batman, but with no moral backbone and the powers of a god. He has a no-nonsense view of the world and is filled with guilt for his past.

While being a good actor, Dwayne Johnson is not great in comedic or light-hearted roles. Black Adam plays to his strengths. The character is a muscle-bound bruiser with a dark past. He doesn’t play into humor much, only slightly delving into sarcasm, when appropriate. Adam will destroy anyone or anything in his way. No need for deeper insight into the character, making it perfect for an action-film star like Johnson. It’s almost as if the character was made just for him.

The movie is not without its faults. With a run time just over two hours, this roller coaster hits the brakes a few times. There is a point where the film feels like a logical ending has been reached, only to have another 30 to 40 minutes of run time to go. This sudden stop derailed the film in a way, taking a moment for the audience to try to get back into it. It’s like running a marathon and thinking you reached the finish line, only to find it was just a rest stop.

Still, Black Adam is a fun action film. I give it four out of five stars. Dwayne Johnson plays the role perfectly. I know Johnson is not a single-faceted person, but he excels at playing the action star. While the movie is a little bumpy and has some plot holes, Black Adam is a good comic book flick to check out.