Blumhouse’s Fantasy Island is a Jumbled Mess, But Easy to Enjoy

Fantasy Island was one of those shows my parents watched while I was growing up. It aired on the ABC television network from 1977 to 1984 and starred Ricardo Montalban (who also played one of my favorite villains, Khan Noonien Singh on Star Trek). My mom loved the show, but as a kid in those years, I hated it. Even though it was on television every week, the only thing I remembered from the show was Tattoo, the dwarf servant for Montalban’s Mr. Roarke, shouting at the beginning of each episode, “The plane, boss! The plane!!” as the newest arrivals to the island flew in.

In retrospect, had I known more about the premise of the show, I may have been a little more loving toward it. The show pretty much had everything I love in movies and shows. The island was magical and Mr. Roarke was a complete mystery, having been tied to a woman who was more than 300 years old, and being friends with Cleopatra. The show not only had the island’s magic powers, but also fantasy characters, including mermaids, genies and even the Devil, himself. Everyone came to the island to live out a fantasy, regardless if it was for love or for fame.

Honestly, I thought the show was about people flying to an island to find love. In my mind, it was lonely people getting matched up with other lonely people and having a date. I had no clue that there was this much action, adventure and even scares on the TV show.

When I heard that Blumhouse was picking up the show to develop into a horror film, it was understandable that I was caught off guard. How could they turn a “TV love drama” into a scary movie? And why? Was this just an attempt to capitalize off the name recognition to get more people into the theater to see their flick? 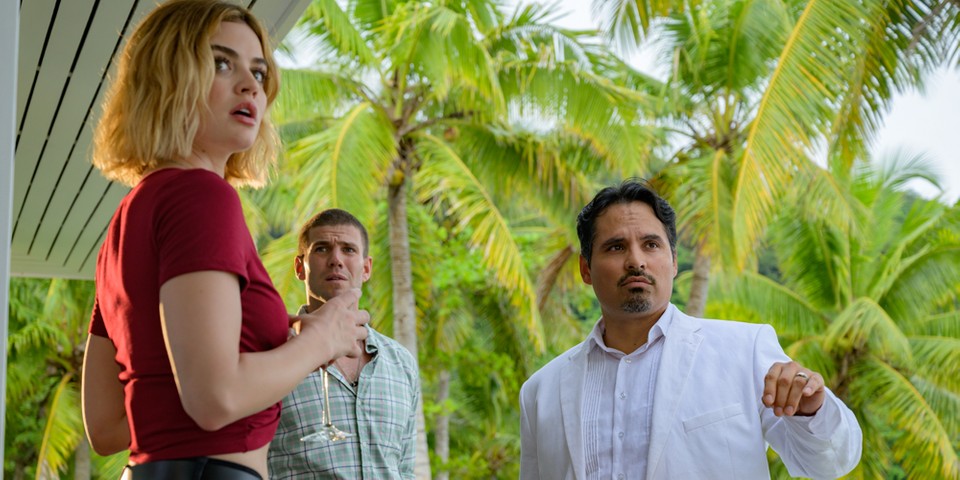 Fantasy Island jumps right into the main story. Gwen (Maggie Q), Melanie (Lucy Hale), Patrick (Austin Stowell), Brax (Jimmy O. Yang) and J.D. (Ryan Hansen) all land on the island with the understanding that they can experience one fantasy. After having their welcoming drinks in a bar, they meet the owner of the resort, Mr. Roarke (Michael Pena), and his right-hand woman, Julia (Parisa Fitz-Henley), who explain they can have their one fantasy, but must see it all the way through, no matter what.

Not knowing that the island used magic to grant their fantasies, the guests happily begin partaking in their dreams. Gwen agrees to marry her ex-boyfriend instead of saying no, like she did in the past. Patrick gets to become a soldier to pay homage to his father, who died heroically saving his platoon during a mission. Brax and J.D. get to live the life of luxury in a mansion surrounded by incredibly sexy models and a party atmosphere. Everyone begins their journey full of joy in their hearts.

But Melanie’s fantasy is darker, wanting to enact torture on Sloane (Portia Doubleday), a girl who harassed her in high school and made Melanie’s childhood a living hell. Entering a makeshift lab, Melanie finds Sloane restrained to a chair behind one-way mirrors. Believing it to be a hologram, Melanie begins turning dials and pushing buttons, causing several things to happen to her. Melanie begins to realize that this is the real Sloane, just as a muscular surgeon enters the room with the intent to murder her. Unable to allow that to happen, Melanie incapacitates the surgeon and frees Sloane.

Elsewhere on the island, the other guests’ adventures start taking sinister turns. With the fantasies becoming nightmares, the guests begin to realize the warning that Mr. Roarke gave them earlier: They must see their fantasies to the end.

But… what is at the end?

Fantasy Island takes the story from the TV series and turns it dark and chaotic. While it is built as a horror movie, it fails to become that. There are many horror elements in the film, but they come off weak. For example, some of the drug cartel members are shot and killed. But soon they recover as “Zombies.” However, instead of being scary, they just become silent versions of themselves. They still use their guns and have the same mannerisms, but they just don’t talk. Also, the surgeon character looked intimidating, but ultimately does nothing of note, reminding me of Earl in the film House of 1000 Corpses.

The story for Fantasy Island is full of holes, as well. Why were these people chosen? Does anyone ever have a happy ending on the island? What happens when the fantasy ends? There are others, but I do not want to spoil them. Let’s just say the ending of the film just seemed abrupt and left yet another huge unanswered question.

With all the failures, you would think Fantasy Island was a flop. But much like the mystery of the island, I found myself still liking the film. It is a chaotic mess of a movie with multiple personality disorder, but somehow it works for me. It’s a dramatic horror adventure that’s sexy and funny, all at the same time. This earns Blumhouse’s Fantasy Island three out of five stars. It’s worth seeing, but you may have to see it twice to understand all the elements. And that is OK, because Blumhouse somehow turned a jumbled film into something you would actually want to see again.