Guardians of the Glades Proves that Pythons + Florida = Bad News 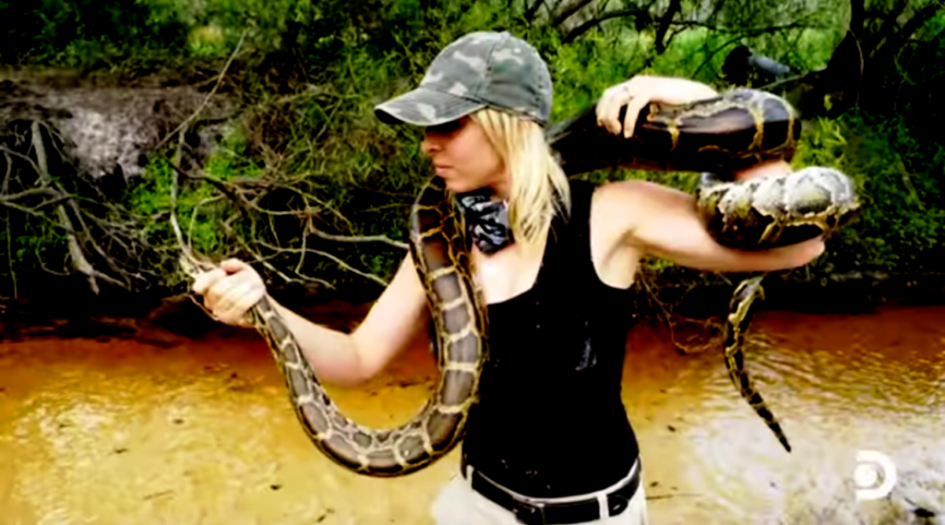 Monsters come in all shapes and sizes. In South Florida — all the way north to Central Florida! — that invasive species without a known predator is the Burmese python, which is currently slithering around, wiping out entire populations of wildlife throughout the state. One group of monster hunters is fighting the good fight, as documented in the reality TV series, Guardians of the Glades.

As mentioned in the show’s introduction: In 1992, almost 1,000 Burmese pythons escaped into the Everglades. Today, their population has exploded to more than 300,000 and they’re running out of food. The entire lower one-third of the United States is under threat. We’re fighting to protect America.

These hunters are independent contractors, or swamprenuers, committed to stopping the oncoming invasion of cold-blooded killers. Dusty Crum’s trusted crew involves Tom the swamp survivalist, Jack the python hunter, Jay Starr the swamp guru and Brittany Borges, the lone millennial (and female) who uses technology to find the wild reptiles.

They’re definitely eco warriors — although they’d probably prefer you don’t call them that to their faces — fighting to protect America. As wildlife disappears, the snakes must rely on hunting other creatures for food, which means anything from swamp rats to small varmits are all fair game. That means disease can spread from insects to critters to humans. Could the plague be far behind?

Florida is basically one big swamp, where more than 1,000 people are moving every day. This crew seems to be genuine in doing their civic duty, fighting for the people, regardless if they live in the concrete jungle or out in the country. Crum led his team on a successful road trip to protect mother nature, up to Lake Kissimmee’s surrounding areas and down to the Florida Keys, finding nightmare creatures along the way.

“The Everglades is literally out to get us…”

Randomly, I’ve caught a couple of episodes in the past, but I never really knew when or where to find this series. But after “Snake Bait” recently aired and made the media rounds as Brittany caught a 15-foot-long snake all by herself and barely lived to tell the tale, I managed to record some episodes on Discovery. She’s been strangled, choked out, wrapped up and finally bitten… she’s definitely the rising star of the show. And with only a few episodes remaining for this season, the show (as well as her popularity) will surely soon skyrocket.

In this day and age, how can a popular TV show NOT have wiki page floating around, somewhere out there? Trying to dig up any behind-the-scenes information about the show is tough, but after watching a mini marathon of Season 2, I’ve learned a lot about the show and the characters appearing on the small screen. Mostly: snakes are scary predators and catching them is big business.

“That’s the smell of victory…”

There’s some near misses and some strikes that hit right on target, as these hunters sometimes get a little bloody. Pythons hunt at night, so naturally there’s a built-in spooky aspect. And since they’re ambush predators, the survival of the fittest is definitely on display.

With the series’ season quickly wrapping up, I’ll need a little time to watch some reruns to finally figure out what exactly “hucklebuck” means…