Calling All Anime, Gaming, Comics and Animation Fans: Join Us for Momocon 2019!

It’s about that time of the year! Only 12 days until Momocon 2019, an all-ages Geek Culture convention in Atlanta, GA, celebrating their 15th year since inauguration! Matt has gone previously, but this will be my first time attending Momocon.

It’s been a good while since I’ve been to any convention. The last one was Roosterteeth, DreamHack, and Wizard World when I was living in Austin, TX in 2017. Before Austin was Middle Tennessee Anime Convention (MTAC) and Geek Media Expo (GMX) here in Nashville, TN, back in 2013 and 2014. With more than 35,400 unique and over 100,800 turnstile attendance in 2018, MomoCon has become one of the fastest-growing all-ages conventions in the country, trumping MTAC and GMX combined!

Although I am not hardcore into anime, I am looking forward to seeing thousands of fans geek out over their favorites. Growing up as second generation in America and having English as my second language, I tried to assimilate myself into American culture by watching a lot of American animations, like Rugrats, Hey Arnold and Doug. At the same time, many Americans were learning about Japanese culture and anime all while watching shows like Sailor Moon, Dragon Ball Z and Pokémon. Don’t worry, I’ve gotten into anime more as an adult, recently getting back into watching Cowboy Bebop, Attack on Titan and One Punch Man. I am super stoked to get to see Dj-Jo on Saturday, a vocaloid producer who specializes in EDM remixes of music from franchises like The Legend of Zelda, Attack on Titan and Tokyo Ghoul. He’s a musical genius. 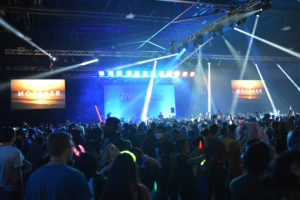 Not only will there be awesome musicians and writers, but amazing and talented cosplayers.

Having dabbled in creating cosplays for the Adventure Science Center’s Way Late Play Dates and GMX, I’ve been itching to put some fabric down on my sewing machine. I’m really looking forward to speaking to Casey Renee Cosplay, the winner of the 2018 TwitchCon cosplay contest. Her costumes are so elaborate that it blows my mind! Casey is an incredible needle worker, and along with Gabi, the costumer, I’m hoping to learn a few tips or tricks to help me get back into sewing. 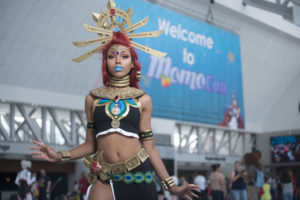 I seriously cannot wait for Momocon! I haven’t had time to create any cosplays for this con, but will definitely dress up a couple of the days. Last Halloween, we had a costume contest at work and I created a Princess Peach costume. With Samantha Kelly, the voice of Peach, attending Momocon this year, I will definitely break that dress out.

I cannot stress this enough: I AM SO EXCITED to attend Momocon this year — not only to witness amazing guests, but also to see the panels and exhibitors! 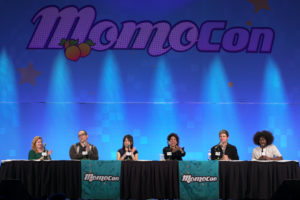 I found that lately I’ve been hoarding random objects because I feel I can use them to create cool things, but I just came to the realization that I don’t have the time or room to keep doing this. Moving to San Francisco in July, I’ve started training myself to only purchase already-made collectibles from talented artists. I am not taking all my random junk across the country. No way, no how. 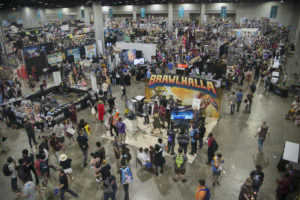 Anyway, time to stop babbling. Be on the lookout for some all new Cosplayer of the Month columns and possibly some interviews from great Momocon guests.