Candyman Tells ‘Em the Truth in My Guilty Pleasure 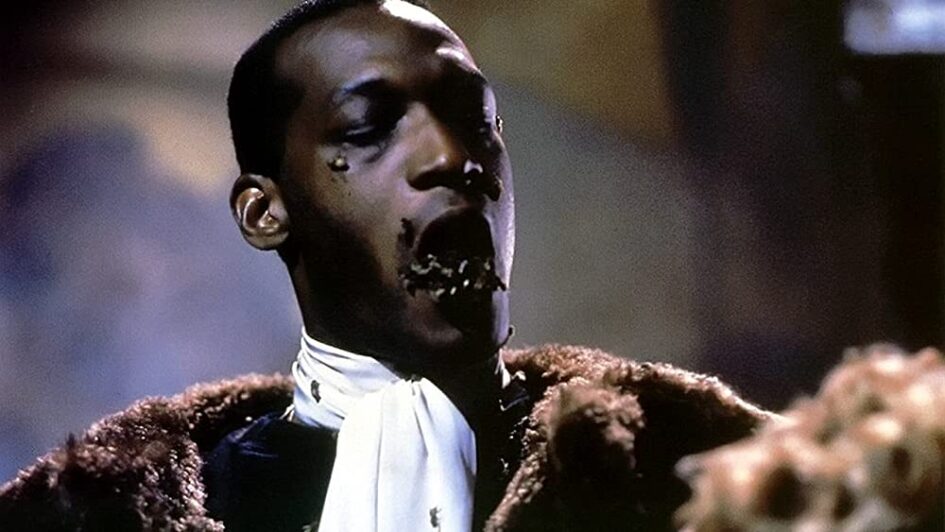 Per Matt
Sometimes there’s a little bit of truth hidden in plain sight, when dealing with urban legends. That’s what makes Candyman My Guilty Pleasure.

Public gatherings with random strangers was highly frowned upon by the CDC while COVID-19 still creeps around, so I didn’t get to visit any haunted houses or attractions this year. Sadly, it’s also why many movie theaters are currently closed. Even worse, I didn’t get to go trick or treating. Now, I may or may not be a little too old for the latter to be true, so watching Candyman in its entirety is the next best thing.

Two grad students studying urban legends for their thesis are led to the projects, where a local gang leader lives (who happens to share the name of a local myth). Repeating his name five times while looking in the mirror will summon him… along with the bloodlust from beyond the grave.

“Your disbelief destroyed the faith of my congregation. Without them, I am nothing.”

Framed for two murders she didn’t commit, Helen must deal with a Big Bad who’s only visible to the person requesting his presence. He’s a real-life terror who’s only whispered about on street corners, not actually there. He’s written off as hallucinations or claims by the poor and the crazy. So, why can’t these people see the true evil that is actually standing there, right in front of their eyes?

That’s a really cool metaphor wrapped in the guise of a horror movie. Released in 1992, I’d always seen bits or pieces of this fright flick, so it was about time I finally sat down and watched it from beginning to end. Based on a short story written by Clive Barker (which originally focused on the British class system), Candyman was successful enough to warrant two sequels (I haven’t seen either). Most importantly, Jordan Peele filmed a selective sequel of the same name, bringing back Tony Todd to the titular role that supernatural horror fans have known and loved for decades. Unfortunately, a global pandemic has delayed the film’s release, which was pushed back to a 2021 premiere. I guess that means there’s still time for me to watch Farewell to the Flesh and Day of the Dead…

Throughout the years, I’ve spoken to Tony Todd a few times at various horror conventions and every time he was very, very nice to me. He’s definitely got a loyal following, as his table was ALWAYS crowded by fans seeking autographs and pictures. The veteran actor has appeared in SO MANY of my favorite TV shows and feature films, there’s just too many to list individually, but I will mention enjoying his roles on Platoon, Night of the Living Dead, Star Trek: The Next Generation and an excellent original episode of The X-Files.

I truly cannot wait to see what director Nia DaCosta has in store for the character. I have no idea about her previous works as a filmmaker, but knowing that she has been given the keys to the $180 million production of Captain Marvel II brings high hopes to rejuvenating this horror franchise to the near future.