Captain Marvel Rocks the ’90s for the MCU 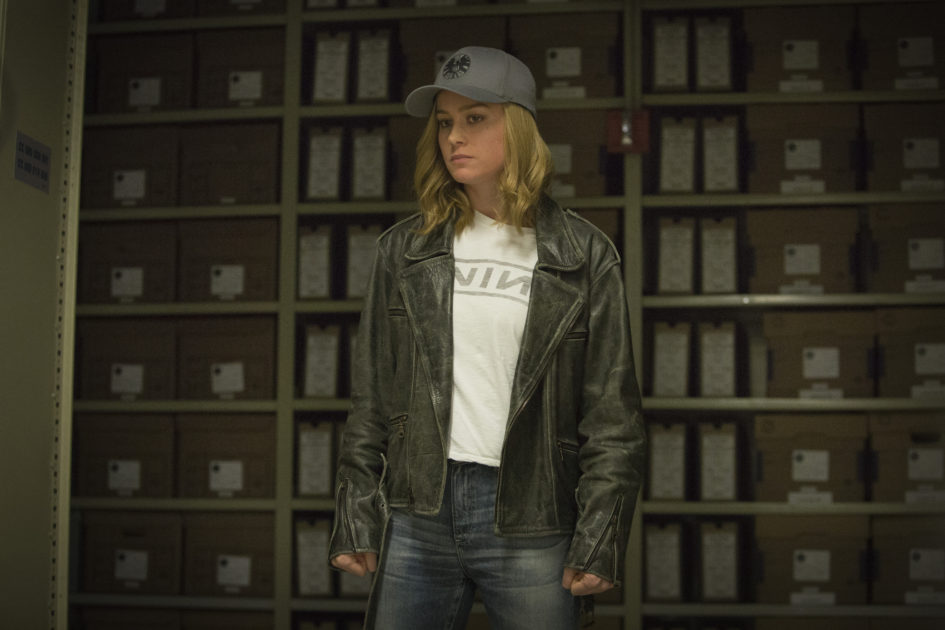 Per Matt
Up until now, the Marvel Cinematic Universe has featured a wide assortment of genre films for its superheroes, with the majority of them featuring men. With Captain Marvel, a different type of approach was made, and it’s a significant storytelling moment, as Phase Four of the MCU approaches very quickly.

Captain Marvel is billed as the MCU’s first stand-alone female-franchise film, although she’s not flying solo, here. It’s more of an ensemble film, but it’s not only the origin story of Carol Danvers (portrayed by Brie Larson), but also Samuel Jackson’s Nick Fury and, to a lesser extent, Clark Gregg’s Phil Coulson (he’s the glue that holds the Marvel Cinematic Universe together). Taking place in the 1990s, the Kree-Skrull War finally gets some big-screen attention, as it’s been discussed a bit in Agents of S.H.I.E.L.D. An intergalactic military group — I’m not sure if the name Starforce is ever mentioned — of Kree is led by Jude Law’s Yon-Rogg, but like any complex storyline, there’s secret orders involved.

Larson fights the good fight while battling herself, as her character’s past is unknown. While trying to control her unusual powers, she slowly pieces together her background after crash-landing on Earth.

Written and directed by Anna Boden and Ryan Fleck, Boden is also Marvel Studios’ first female director, although that title feels dulled, since she’s teamed up with her husband here. The movie does a great job of bringing in more of the cosmic aspects of Marvel Comics, while presenting an approachable character of Carol Danvers, who may feel like the most humane of all the big-screen superheroes.

Per the film’s official media kit, “We thought it was the right time to finally introduce Captain Marvel to the world. She’s one of the most popular characters and one of the most powerful characters in the comics and will now be the most powerful character in the Marvel Cinematic Universe,” said Producer Kevin Feige. “We’ve always had powerful female characters and heroes in our films. But having a female superhero franchise title character for the first time feels overdue, and it’s something that we have been excited about for a long time, and we can’t wait to deliver it to the world.”

Taking place in the 1990s, Captain Marvel‘s setting predates Tony Stark’s origins. Other than fashion and pop culture shout-outs, just about every action scene (or a transition to one) features yet another “Don’t forget this is happening in the ’90s” opportunity to blast a popular song from that decade, which felt a little forced at times, when it could have been more appropriate to play a powerful instrumental score. There’s no love interest here for Danvers, but a strong female friendship is made to Maria Rambeau (Lashana Lynch), an Air Force fighter pilot with ties to Carol’s past. It will be interesting to see if Rambeau makes any future MCU appearances, as Lynch has signed on to star in the comic book adaptation of Brian K. Vaughan and Pia Guerra’s Y: The Last Man, which has been ordered to series by FX.

A mid-credits scene leads up to a post-Infinity War introduction, which will lead into the next Avengers film.

I really enjoyed Captain Marvel, but I was disappointed that Ronan the Accuser has very little screen time, as I assumed he’d be the Big Bad (he isn’t). This was one of my favorite characters in Guardians of the Galaxy and I really wanted more of his backstory told, so with his minor contribution here to the storyline (while being teased as being a big deal), it was really a letdown. Hopefully, this will lead to more of his story being told in a future sequel. I contend the character’s still alive, trapped within the Infinity Stone as used in the conclusion of the Guardians dance battle. It would be a huge missed opportunity if the character doesn’t return in some capacity for a future Marvel movie. Hopefully, he will get his chance to battle Danvers soon.