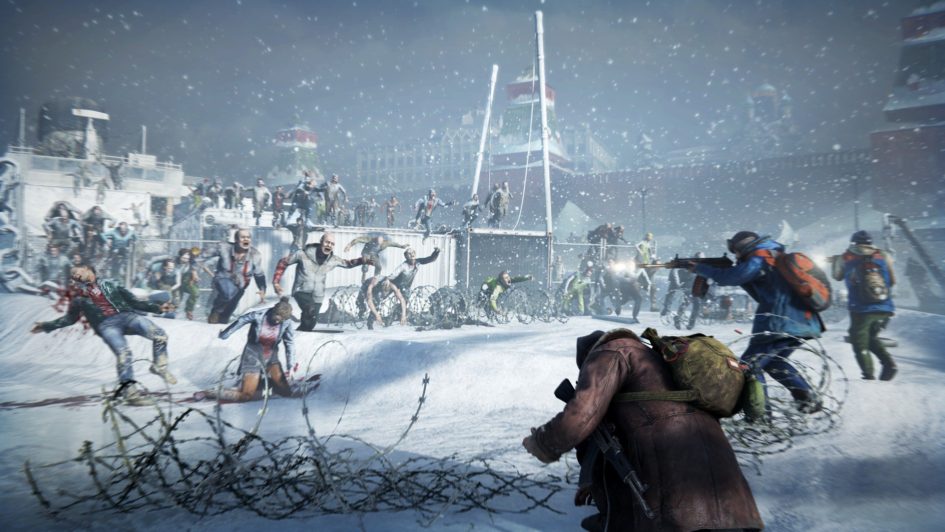 Horror movie fans may be excited to see the recent trailer release for the upcoming World War Z video game rise from the dead. Entitled “The Zombies are Coming,” Saber Interactive and Focus Home Interactive hope to entice gamers to pre-order the game or pick up the title upon its release on April 16th. So, what are the details?

After watching the trailer, a couple of questions arise. While #OutlivetheDead seems to be the ongoing theme, there are massive Zombie herds — or swarms as they’re described on the game’s official webpage. The trailer seems to be mostly cinematic videos and not much actual game footage. Oh yeah, these are fast-moving Zombies. Very fast moving, it seems. At the end, we see a helicopter get overrun by the undead, so in some part the game seems to be related to the movie of the same name, but since the story will focus on fighting multiple hordes around the globe, it may, in some part, be loosely connected to the far-superior novel by Max Brooks. One can only hope.

Described as a four-player co-op action game, this third-person shooter seems to have both single player and multiplayer campaigns.

According to the game’s webpage, there will be six unique character classes to play, with the possibility of gamers to level up each one. Sounds like there will be an RPG element to characterization. Also, in terms of taking on multiple enemies at once:

The game will focus on survivors in Moscow to those New York and even Jerusalem. It would be interesting to see if any DLC will be available, as battles in new cities around the world could be offered with each new release. Depending on how much development resources the combined companies provide this game, it could possibly lead to a never-ending evolving game, much like the Zombies in the film.

Color us interested in this game’s release, but it is curious why a spin-off title is released six years after the movie of the same name was released. With the recent news that there will not be a World War Z sequel on the big screen, it’s even more curious to release a game based on the previous property.

With the closure of Telltale Games (The Walking Dead: A Telltale Games Series) and the console portal of Overkill’s The Walking Dead cancelled, the current state of video games featuring the undead feels like it’s been fading away quickly (Zombie Games Seem to be Dying a Fast Death). However, Xbox fans have a couple of reasons to think otherwise. This week, the DLC to Plants vs Zombies: Garden Warfare 2 is half off its normal price and later this month, the game will be offered for free to gamers who have Xbox Live Gold. All of this is to hype up the upcoming EA game release of Plants vs Zombies: Garden Warfare 3.