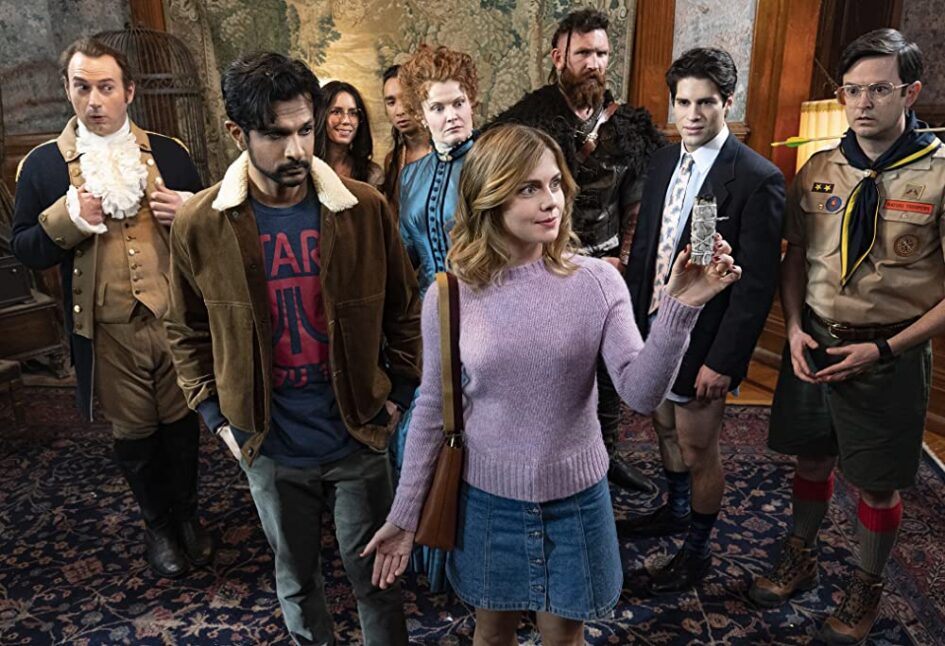 Per Matt
October is here, so spooky spirits must be near. As a Child of the ’80s, I was intrigued by the paranormal. So, when a filmmaker fascinated by the macabre (Tim Burton) brought an undead hellraiser (Michael Keaton) to the big screen, my joy for the genre really ramped up. I’ve continued to follow both filmmakers to this day (but I’m entirely unsure about Beetlejuice 2) and my fond memories of that 1988 film were renewed recently when watching the new series, Ghosts.

Having seen the show’s commercials, I was interested enough to give it a try. I mean, the afterlife is no laughing matter… right?

When a modern-day, city-dwelling couple inherits a run-down 300-year-old house and decides to renovate it into a bed and breakfast, they’re opposed by the current tenants, who plan on haunting “the livings” outta there. But when Samantha (played by Rose McIver) falls down a flight of stairs and hits her head, after recovering from a severe concussion (and technically being dead for three minutes), she’s now able to see the disembodied spirits who can’t seem to leave.

Eight ghosts, cursed to spend an eternity at Woodstone Estate, are pleasant enough to watch. As each one died within different time periods on the property, there’s plenty of dated-reference jokes to mine with each portrayal (including way too many involving Hamilton). Sam wants to help them move onto the afterlife, but various obstacles prevent that. And then there’s the eight spirits hanging out in the basement who died of cholera…

I was pleasantly surprised Ghosts is not a comedy in its truest definition. There is no laugh track and as a BBC adaptation, there’s definitely some dry humor, paired with the American perspective. I found myself liking McIver’s portrayal a little more each week, but it feels like the role of her husband, Jay (Utkarsh Ambudkar), is unnecessary. I’d be just as happy if the story only revolved around her.

I seem to be indifferent about this type of Purgatory. While these characters tend to spend time literally watching paint dry, the drama only seems to happen when they deal with the living. I’d like to see more from their interactions with other “livings,” but that may take a while with all of the remodeling going on.

As haunters, their attempts are humorous at best (this is mainly when the fond Beetlejuice memories arise). So far, only three of their unusual abilities have been revealed. Isaac died of dysentery, so anyone who walks through him smells the ghost’s foul odors. Thor can interact with modern-day electronics, since he died by a lightning strike. Alberta can project her humming into the world of the living as a singer in her past life and Trevor can slightly move furniture (for some reason).

After three episodes, I found the most interesting character to be Thorfinn (Devan Long). When his bones are discovered on the property, “the livings” debate between a Viking funeral and a museum payday. Sharing the name of a Norse god from the MCU, this version of the character also brings laughter in his speech patterns, as well as references to a faraway life. (Long’s performance could easily have been influenced by Chris Hemsworth’s in Thor: Ragnarok.)

I’m assuming — and hoping — more backstories for these characters will develop in future episodes, when personal items from their lives are discovered.

While Sam is no longer considered delusional by her husband, I’m interested to see if her newfound abilities to speak to the undead will eventually attract a potential malevolent presence… that could really revive the Beetlejuice vibe!

Give Ghosts a shot for your paranormal pleasures during the spooky season!