Nashville Nightmare is Back in Full Force for 2021 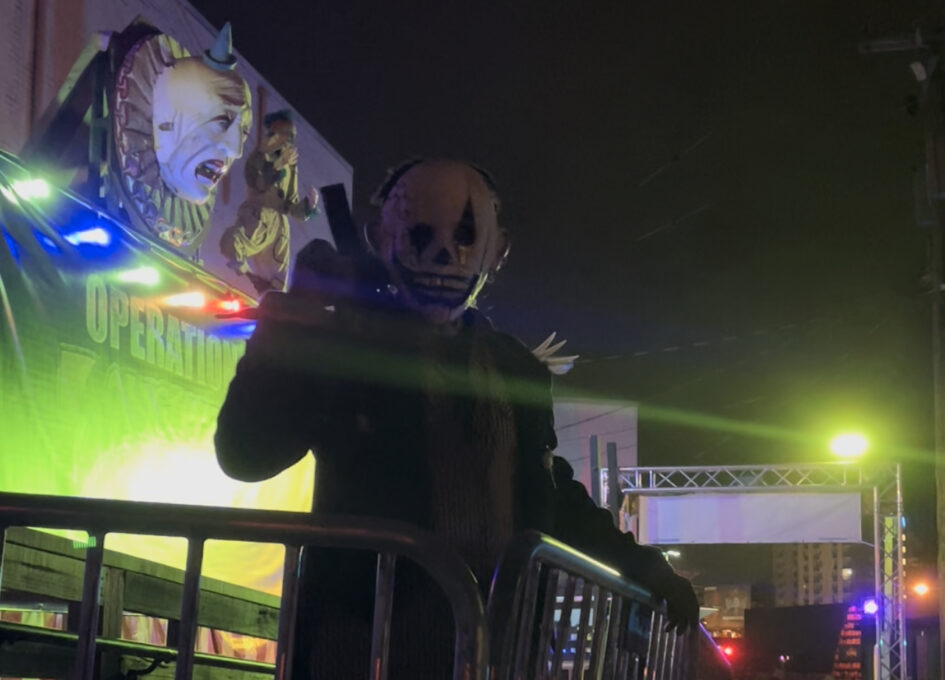 It’s no secret that Halloween is my favorite part of the year, by far. While Christmas comes in at a close second, the spooky season gives me so many of the things I love. We get pumpkin-spiced everything (even though I rarely get it). We get the color changes of the fall (even though I am color blind). We get the chilly air (even though… wait… this is something I actually get to experience). And we get haunted houses.

I had the fortune of being invited to a media night at Nashville’s largest haunted attraction: Nashville Nightmare. So, upfront, I want to be honest and say that this, as some people give reviews and never state they got invited to the attraction. It won’t affect my review, as I feel that their product should speak volumes about them.

Without further delay, here is what I experienced at Nashville Nightmare Haunted Attraction:

Upon arrival, the security staff greeted me with metal detectors and wands. Honestly, this makes me feel a little safer when going out. It was quick and easy. The haunted house area is known for not being the safest, and while there has never been a shooting there, you can’t be too safe. Especially nowadays, where people seem to have lost their minds, pulling guns anywhere and everywhere. Rest assured, Nashville Nightmare is doing what it can to ensure your safety.

Once inside the scream park (love that takes on the “theme park” moniker), I made quick work of the ticket line and got my keepsake picture taken. Then it was off to the haunted houses. Nashville Nightmare has five haunted houses on the property for the 2021 season. I will break each one down and give you my honest thoughts on each. 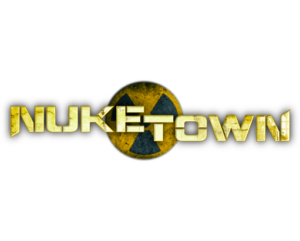 “A controversial nuclear testing facility left abandoned in the 1950s has been the center of strange occurrences. Despite the shell-shocked vacant buildings being void of life for decades, locals have witnessed slithering shadows emerge from the structures late at night. Vagrant travelers looking for shelter have found refuge within the hollow shell structures, but a biohazard material left behind by the nuclear testing has mutated the beings into ravenous toxic monsters hungry for human flesh.” (Description courtesy of Nashville Nightmare)

This attraction has been a staple of Nashville Nightmare for many years. While it has gone by many names, the premise stays the same. The haunt is themed like a military bunker that has been overrun with monsters and mutants. The queue area is set up with military gun towers and burnt-out vehicles. Once you pass through the doors, you are greeted with alarms and flashing lights, disorienting you as you venture deeper.

While this haunt has been around for a while, it is still well-themed and spooky. I found myself disoriented with how the staff changed the pathing and enjoyed some of the new jump scares. Still, this haunt could use a re-theme soon. It’s starting to lose some of its luster. 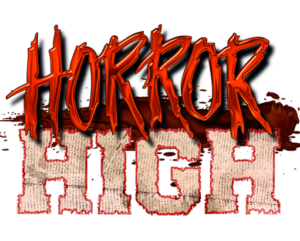 “Last summer the captain of the cheer squad, Roxanne, went missing. Rumor had it that she was kidnapped by her jealous teammate, due to her wild success. This fall school is back in session and evil lurks grounds. Roxanne returns for a bloody vengeance, along with her summoned demons, as she claims the halls of Horror High as her playfield. Get ready to cheer for fear and BE AGGRESSIVE! B-E AGGRESSIVE! Let’s just hope you don’t become a dead man!” (Description courtesy of Nashville Nightmare)

Another haunted house that has been around for a few years is Horror High. In a nutshell, you are entering a school in Hell, itself. All the students and staff have been possessed by a great evil, looking for a few souls to steal. Not many people know this, but Horror High is actually an homage to a full-scale haunted house from Nashville’s past. You pass through hallways complete with lockers, classrooms with demonic teachers, bathrooms with some nasty things inside and the cafeteria complete with rotten food.

I have to admit that Horror High is one of my favorite haunts at Nashville Nightmare. However, while I am glad to see it still here, it is starting to get a little “long in the tooth,” like Nuke Town. It was revamped a few seasons back, which took away my love of this house, but this year it is back to basics and I am very happy to see that. 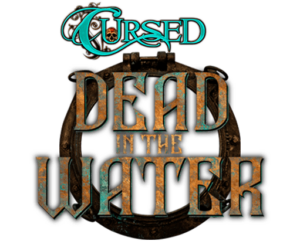 CURSED: DEAD IN THE WATER

“Echoes from the golden age of riverboats float within the waterlogged woodwork of the once glorious vessel. The incensed spirits of dangerous gamblers and high society aristocrats haunt the sunken steamboat. Their unearthly powers summon creatures lurking within the muddied depths of the clouded river. Journey into sinking ruins and discover the horrifying truth behind Legends Of The Deep!” (Description courtesy of Nashville Nightmare)

This haunt is one of the new attractions at Nashville Nightmare. Many of the floors in this haunt are made to give you the feeling of being on a ship, making you wobble around as you proceed. You end up finding yourself being hunted down by pirates and other denizens of the deep.

I honestly enjoyed this haunt. I like the fresh approach and new feel. Even though I ended up getting caught up with another group, it was still one of my favorites of the night. Love the Pirates of the Caribbean feel. 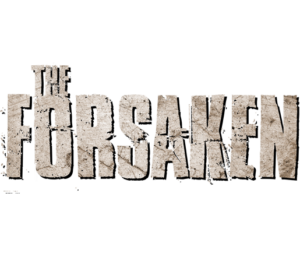 “The madness from within the prison has spilled out into the yard, where the queen of the damned rules over the most infamous and violent prisoners. This doomsday squad has launched an all-out assault on the living in an attempt to escape their eternal captivity. Journey through the chaos as the path winds through open-air smoldering ruins and inside the prison’s machine shop, laundry room and other various industrial spaces. Escape from purgatory might be futile, but it won’t stop the prisoners from having a bloody good time.” (Description courtesy of Nashville Nightmare)

A creepy run-down prison/sanatorium?? YES, PLEASE! This haunt takes place in the oldest part of Nashville Nightmare. And while you would think this would make it stale, it was by far the most renovated section of the event. The look, feel and smells were perfect. The actors here knew how to pull off the best scares, and got me more times than I would like to admit. This is the must-see attraction at the haunt! 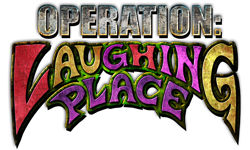 “A new type of chemical weapon has been unleashed upon Nashville. LMF-AO is a biological hallucinogen that causes victims to see extreme colors and clown-like apparitions. Can you stay sane amidst the wrath of this hallucinogen?” (Description courtesy of Nashville Nightmare)

During the summer months, Nashville Nightmare usually hosts a Zombie-shooting event. The name changes from time to time, but basically, you are given a gun and sent into the haunt to shoot monsters. This year, the team has brought this action shooter to the haunt season in Operation: Laughing Place, a clown-filled horror show.

Visually, this haunt is stunning. Lots of blacklight reflective paints make this place vibrant and a feast for the eyes. Unfortunately, that is about all I can say for the haunt. I know weekday nights are hard to staff, but I feel like there were only three or four actors to shoot at inside. As an add-on haunt, it feels like there should be more. I got bored and took shots at animatronics and set pieces. I love the idea, but the execution this evening was lackluster.

After checking out the haunts on the property, I also tried all of the specialty drinks offered at Bar Nashville. They provided three exclusive drinks this year. First, you have Vampire’s Blood, consisting of vodka, cranberry juice and grenadine. Witches Brew switches out cranberry juice for Sprite. And the Dirty Zombie is a blend of bourbon, Coke and lime juice. Honestly, I was not a fan of any of these. The Witches Brew was probably the best, but the amount of liquor just was not for me. I like to be able to taste the non-alcoholic parts of my drinks. Still, if you like to just have a hint of everything but the alcohol, try them out!

Nashville Nightmare has put forth a great show for 2021. With only a few tweaks and changes, it will stay the dominating force in the Nashville haunt scene for years to come. But they can never rest. New haunts are opening every few years that may dislodge them as the must-see Halloween event in Nashville, TN. I have faith in their team to not let that happen. Be sure to check them out this year!!