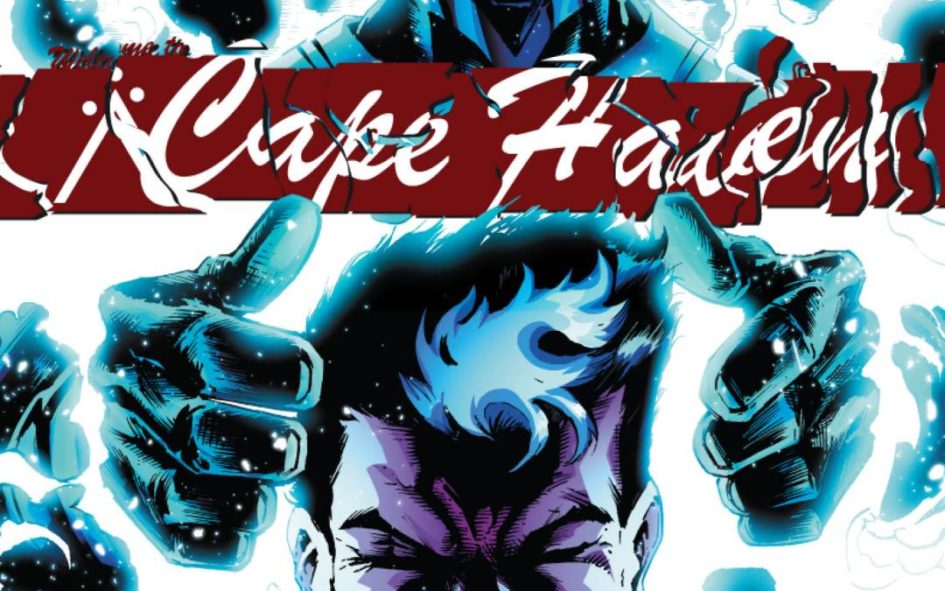 If you’ve ever wondered how to promote your indie comic at a convention, then pay close attention to my interview with creator Steve Stone. While talking about the latest issue of Cape Haven and his graphic novel, Conquest, Steve mentions some brilliant ideas you may want to consider the next time you set up a table at your local comic book convention.

OK, so I really liked Steve’s idea of raffling off a chance for a fan to appear in his comic. What reader wouldn’t want to see themselves illustrated on the page?! Even better, if they’re in a superhero outfit! As a creator, this also gives incentive for the casual convention-goer to purchase a lot of your comics there and put their name on your email list. Steve would also take pictures of those readers who’d made the purchase, holding the comics. In addition to making a handy visual reference of the reader who wins, they also make for good pictures to post on the Facebook page for Conquest.

Steve also has a real nice camera handy (he’s quite the photographer) to take pictures of cosplayers at MegaCon who walk past. When I joined Steve at his table last year, he also had his camera on hand and I noticed that, like many professional photographers do, he’d hand the cosplayers a card with his website. There, they could see the picture of themselves in their getup that he’d taken. His website, ImmortalSamurai.com, also has the first few issues of both Cape Haven and Conquest available to read for free online. This can be a wonderful way to get the casual convention-goers to check out your site and become interested in your comic.

When a convention-goer stops at your table to flip through your comics, you might only have a minute to tell them about your creation. You should be able to sum up your work and pique their interest. This is similar to an elevator pitch in Hollywood. I still remember the episode of Entourage (Season 4, Episode 10), where agent Ari Gold is trying to pitch a script to a studio executive. He describes the setup and then his frenemy, Dana, helps by saying, “It’s like Blade Runner meets Field of Dreams.” In typical fashion, Ari exclaims, “Two classics. Boom!”

So, how does Steve describe his comic, Conquest?

“It’s a samurai-Western in space. Kind of like Star Wars meets Firefly. With samurai, aliens and… soldiers; all fighting for the fate of a galaxy.”

At a comic book convention, it helps to compare your premise to properties that fans might be familiar with.

As you saw in our video interview, Steve also had nifty little wristbands that said, “Join The Conquest” that also listed his website. Tote bags with the stylized name of his comic were also on hand. When someone buys all your comics, they’re gonna need something to carry them around in and it can be an extra bit of advertising for you — whether you sell the tote bags separately or include them if they purchase a lot. For those artists out there, I would also recommend having prints on hand, as they are very cheap for you to have made and can be sold for a profit. It also gives you something to sign for your fans. Steve Stone is the writer, his brother, James Stone, is the artist, so they would just sign the purchased comics. 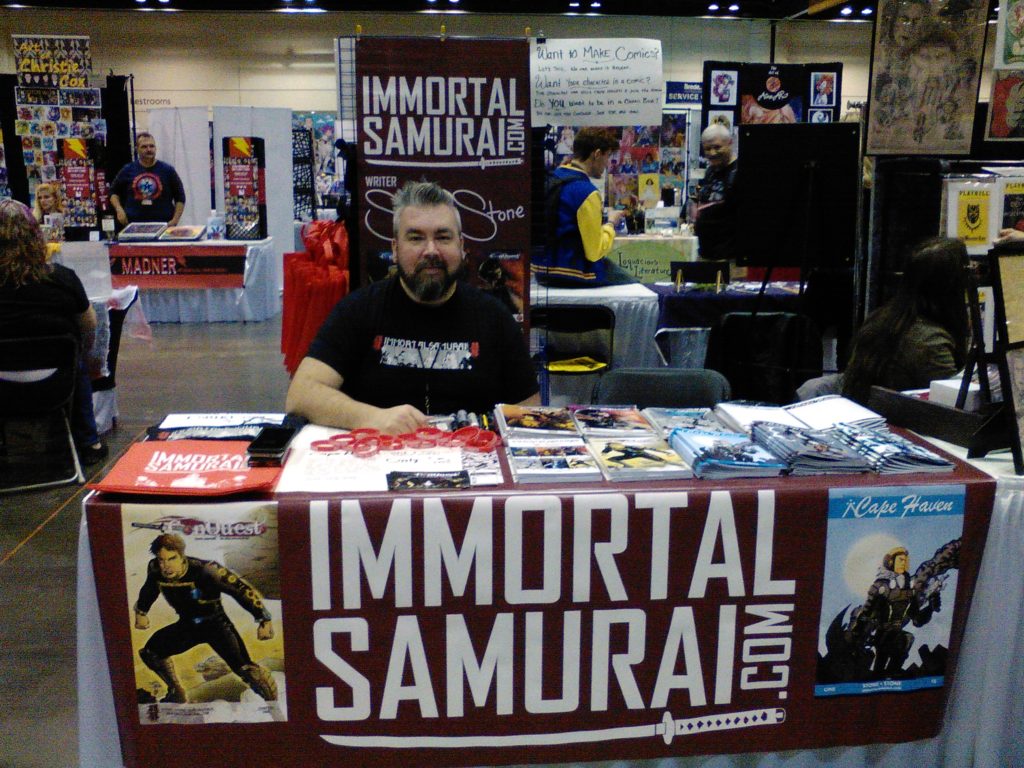 Having a banner behind your table or a cloth banner on your table is always a great way to catch attention. However, it can also be cumbersome to carry. At the end of MegaCon on Sunday, I went by Steve’s table to help him carry all his comics and accompaniments back to his car. I’ve known Steve for a least 15 years and we became friends not long after I met him. We met at the local swing dance, where he was a sometime instructor and DJ. In recent years, we’ve also collaborated on hosting and promoting local social dances. Steve is very outgoing and good at networking. At MegaCon this year, he had made friends with all the creators at the adjoining tables. As we were packing up, he invited the three women at the next table to one of his dances. When one of them exclaimed that she didn’t know how to dance, he took a minute to give her a basic lesson right then and there. Her friend quickly took out her phone to record the lesson.

Steve also spoke with the table behind him as we were about to leave. It had to do with something he’d mentioned in our interview. If there are any comic book creators who want their characters to be part of a larger world, Steve Stone invites them to set their stories in the city of Cape Haven. We live in a time where shared universes are all the rage, so this is a good opportunity for a crossover comic. It also can alleviate the anxiety of world building for other creators. There seems to be plenty of room in Cape Haven, because as we were leaving, Steve spoke to the young woman at the table behind him about her character having a story set in his city. As we set off, he exclaimed, “let’s make a comic!” 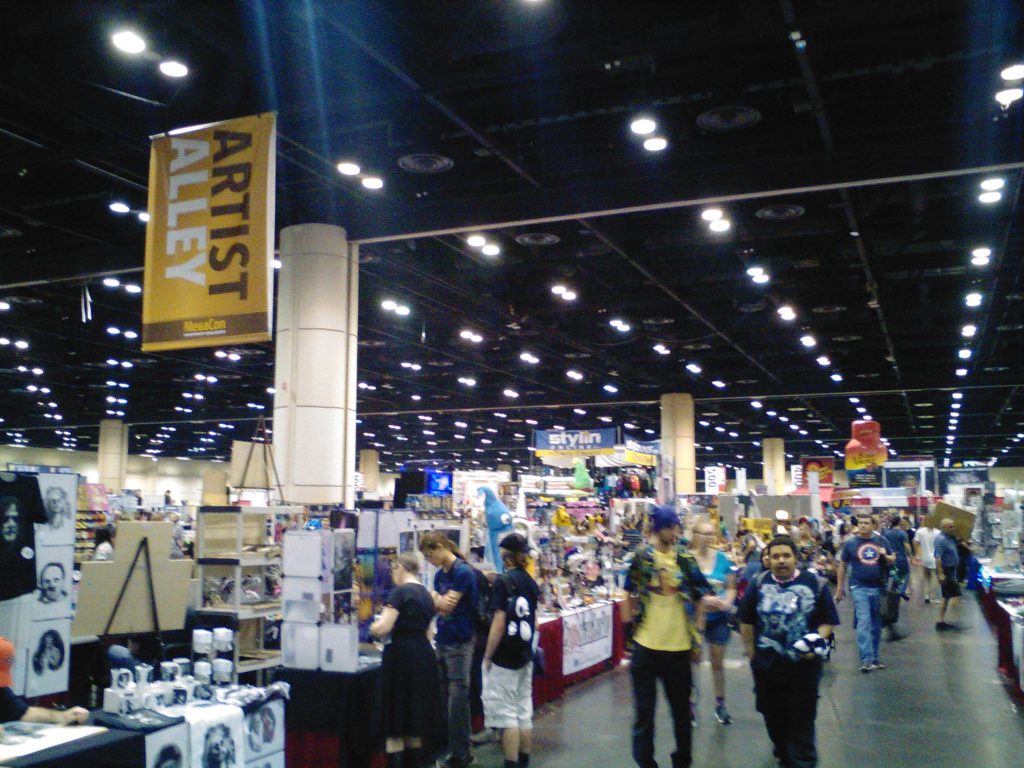