Playing a Critical Role in Campaign 2 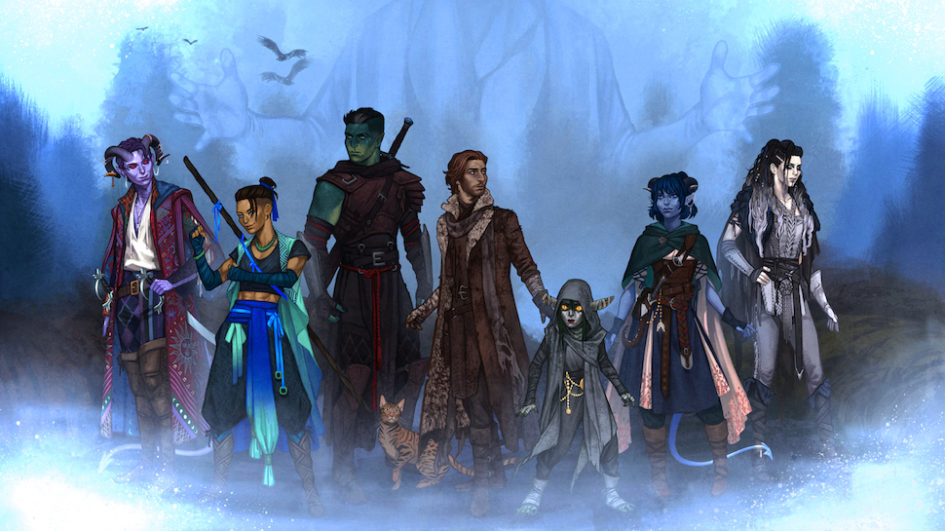 Every week I look forward to watching Critical Role. There’s a reason why the fans always ask and the catchphrase exists: “Is it Thursday yet?”

Along with Stranger Things and HarmonQuest , this show is arguably at the forefront of why the game of Dungeons & Dragons is in vogue. The show has legions of fans and the kind of viewership that would make some traditional television shows envious. But you don’t watch Critical Role on TV. You can catch it on Twitch or YouTube.

Most recently, I’ve tuned into the YouTube stream while in progress and clicked to the beginning, much like watching TV with a DVR, the added bonus is that I can skip the commercial in the middle. Why have I joined the stream late on recent occasions? Because once I was out watching the new release of Avengers: Infinity War and the second time was for Solo: A Star Wars Story. After feeling that each respective movie left me when exiting the theater, it was nice to go home and watch something that would make me happy… man, Disney has really gotta stop ending its movies on a downer.

So, what is this show that I enjoy? What is Critical Role? Well, I’ll let the DM (Dungeon Master) Matthew Mercer sum up the show in his own words, with his usual greeting: “Welcome to tonight’s episode of Critical Role, where a bunch of us nerdy-ass voice actors sit around and play Dungeons & Dragons.”

The show has been airing since 2015. Campaign 1 wrapped up at the end of 2017, and with the advent of Campaign 2 in 2018, the show is now more easily accessible for newcomers who want to check it out. For longtime fans, it means getting to see their favorite voice actors try their hand at some new characters on a new adventure, set in the same world.

Now, I know Matthew Mercer as the voice of McCree in Overwatch, but the man can do so much more than the slow, Southern drawl of a futuristic cowboy with a sixshooter.

Truly a man of a thousand voices, it is amazing to hear him change his voice to match the region, cadence, sex or accent of each new character the players encounter. What’s even more impressive is that he seems flawless in recalling that voice, should his players revisit those characters; and trust me, the players do have their favorites: Gilmore, Victor the black powder merchant and now, Pumat Sol.

This is not to say that the players are any slouches at voice acting. What separates Critical Role from other tabletop role-playing shows is that you’re watching a group of friends, who are also professional and very talented voice actors. Each of these actors has a resume longer than a Walgreens receipt. Suffice it to say, if you’ve played a video game or watched any anime within the last decade, you’ve probably heard at least one of them. What’s more, two of them have acted on television and I know that most come from a theater background — so they’re really good at getting into character.

Getting into character is one thing, the question is: Are their characters cool?

Well, I’ll let you be the judge. You can see their team animated in this bit for D&D Beyond. Get ready for an ’80s cartoon show vibe, nostalgia trip:

You’ve got a well-balanced, diverse, cool-looking team. I wish we could see these characters animated more often… but this isn’t HarmonQuest:

HarmonQuest is actually the only other tabletop role-playing show I watch and I can’t wait for Season 3. There’s honestly not enough good sword and sorcery shows on TV these days and with this one-year break between Seasons 7 and 8 of Game of Thrones, it’s nice to be able to turn to the internet to fill that niche.

When I was watching HarmonQuest, I would discuss the show with my friend, Andy. He’s also the one who recommended Critical Role to me. It’s always great to have a friend to discuss a show with. He also got his girlfriend to watch Campaign 2 and they watch it together. Along with a few other friends within our circle, we enjoy recounting our favorite moments from the most recent episodes.

About the time Andy recommended Critical Role to me last year, I was about to road trip to my cousin’s place for Thanksgiving and needed a podcast for the car. I watched the first few episodes on YouTube to see if I liked it first and decided I did. I’ve since listened to the majority of the episodes from Campaign 1 on my phone via the Podbean app while doing the mundane, like driving, yardwork or housework. While it can be fun to watch the actors interact with a guest player or when the DM brings out the miniatures for a boss battle, sometimes the rest of the adventures are best experienced in the theater of the mind.

While some of the later boss battles are truly epic, my personal favorites are the respective fights where the team goes up against the first two members of the Chroma Conclave. The battle against the white dragon, Vorugal, is fantastic. I also personally like the first half of the battle against the black dragon, Umbrasyl, because of all the planning that paid off, the cool moments I can picture in my head, and the unconventional strategy employed by real life friends Sam Riegel and Liam O’Brien — who really need to come out with a new episode of their podcast: All Work, No Play. In fact, just the other week I was playing Overwatch with my friend, Evan, who had caught up to the fight against Umbrasyl and we had fun talking about it in team voice chat while gaming. Of note was the quick thinking of Sam to save his friend, Liam and teammate Travis Willingham, while free-falling.

I enjoyed watching Chris Hardwick host @midnight on Comedy Central and I also appreciate his interviews on The Nerdist Podcast. I thought the character that Chris created for Critical Role was very unique. I also like how he threw himself into the character and the accent. His interactions with the other players is also very funny. This episode also has a fantastic fight and an extremely clever use by Sam of the spell, Otiluke’s Resilient Sphere. Of course, this episode is infamous for one of the players stealing a flying broom from Chris’s character, which resulted in the DM changing that character’s alignment in future episodes, because of their actions.

Funny enough, it wouldn’t be the last time a character tried to steal from a guest. While I can’t recall it happening again in Campaign 1, it did happen with the first guest in Campaign 2: Khary Payton, who plays King Ezekiel on The Walking Dead and who was playing a very cool blind cleric on Critical Role.

To be fair, Sam Riegel did create a goblin rogue for his character, so, of course, it would try to steal from another character. That doesn’t make it any more inappropriate… but it’s still hilarious. Honestly, the funniest parts of the early episodes of Campaign 2 are watching Sam’s rogue attempting to steal stuff; in the gnome’s shop and in the bathhouse are my favorite examples. That’s not to say his character is all about stealing. The goblin’s relationship with the human wizard — played by Sam’s friend, Liam — is surprisingly layered and deep.

One of the best things about Campaign 2 over Campaign 1 is that we don’t know every character’s backstory right out of the gate. It is a treat to get to speculate and watch things unfold organically. I had speculated on who Travis Willingham’s warlock patron might be in my last article. Out of all the characters, his backstory is still the most intriguing to me. But you might find one of the other characters just as fascinating, you’ll have to watch the show to find out. Then you can discuss each new episode — like I do — with your friends and fellow nerds, or watch discussions by YouTubers.

I was glad to see that Nerdarchy began a Discussion and Review series on Campaign 2. Their YouTube channel, I’ve found, is a great resource of D&D knowledge. I’ve only recently started tabletop role-playing with a group of friends and the Nerdarchy YouTube channel was one I’d turned to for knowledge and insight. Neither of the hosts had watched Campaign 1, but now that they’re watching and discussing Campaign 2, I know that one of them has gone back to watch the previous campaign. That made me happy to hear. I’m sure most viewers who become fans of Critical Role will do the same.