Connecting Avengers: Age of Ultron and Agents of S.H.I.E.L.D. 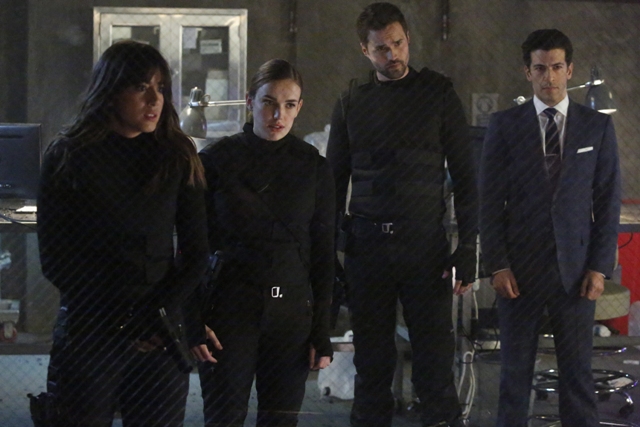 It’s all connected. That’s what Marvel Studios proclaimed last week. During an episode of Marvel’s Agents of S.H.I.E.L.D. there were more than a few connections made between the TV show and the just-released movie, Avengers: Age of Ultron. So, what do you need to know about the TV show before going to see the movie? Read on to find out.

Just in case you were wondering, this article is filled with many spoilers. So, if you haven’t seen the crossover TV episode or the movie yet and don’t want to know what happens, you might want to stop reading now. However, if you have seen them both or you just want to know what to look for before you see it, please continue reading.

While you don’t have to watch every episode of the TV series in order to understand what’s happening on the big screen, there are some key plot lines that lead up to the movie that are helpful to know.

The Season 2 episode of Marvel’s Agents of S.H.I.E.L.D. titled The Dirty Half Dozen was heavily promoted as being a crossover storyline that leads into Avengers: Age of Ultron. Here are some of the episode’s crossover points of interest:

– As Phil Coulson delivers Fury’s Toolbox to Robert Gonzales, he’s informed that Nick Fury is actually still alive and will be looking to retrieve it from him very soon. Gonzales, along with everyone else outside of Coulson’s crew, assumed Fury died long ago.

– Deathlok/Agent Mike Peterson and Lincoln Campbell have been taken hostage by Hydra and Dr. List conducts experiments on them, hoping to duplicate their powers for the bad guys. Eventually, S.H.I.E.L.D. Agents arrive to save both men, but Dr. List manages to escape the skirmish. He makes an appearance in the movie within the first five minutes and moves the big-screen storyline along smoothly.

– Sunil Bakshi, formerly a Hydra agent and currently a brainwashed soldier for Grant Ward, unknowingly helps the S.H.I.E.L.D. agents gain information about the Arctic Hydra Research Facility before the good guys storm the base.

– Dr. List reports directly to Wolfgang von Strucker, who has a bit of screen time during the introduction to Age of Ultron. In campy bad-guy style, Strucker announces his evil plans aloud, getting stopped before actually carrying them out. With Strucker’s supervision, Dr. List experimented on the Maximoff Twins with the Chitauri Scepter, giving them each unique, enhanced powers. Of course, they become Quicksilver and the Scarlet Witch, both playing into the overall Age of Ultron storyline.

– In addition to saving the “enhanced prisoners” at the Arctic base, Coulson sneaks away to secretly download some Hydra information onto a thumb drive. It turns out, his personal mission all along was to get the coordinates for Loki’s scepter (which is the weapon that originally killed Coulson in the first Avengers film). The weapon just happens to be located in Sokovia, where Avengers: Age of Ultron begins.

– Speaking to Maria Hill (who is currently working as an employee of Tony Stark), Coulson reveals the time is nigh to implement Theta Protocol and it’s, “Time to bring in the Avengers.”

– Raina forsees destruction by “Men of metal” tearing cities apart, which is a clear preview of Ultron’s powers. She also states, “The world will be changed forever.”

It will definitely be interesting to find out what the fallout from Age of Ultron will bring to Season 3 of Agents of S.H.I.E.L.D. Perfect timing, lining this episode up with the movie’s release week. I’m sure it was no mistake. You don’t need to have special visions in order to see that corporate symmetry at work.