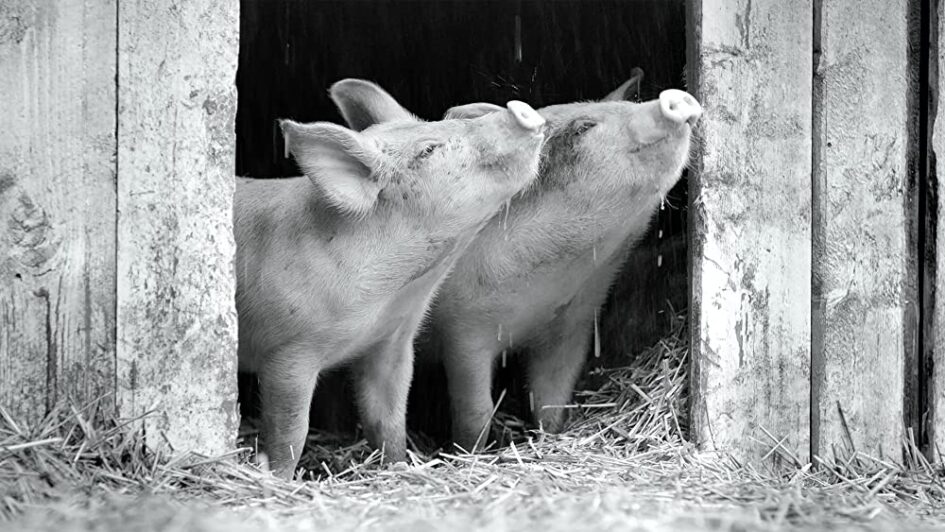 Per Matt
Easy like Sunday morning may evoke thoughts of peaceful weekends, where one can ever-so-briefly get away from the rat race, and perhaps relax a little. Naturally, I chose to spend my Sunday morning watching something a little out of the norm. Whenever I can find something so different than anything else I’ve ever seen, I’m immediately interested, even if I haven’t read anything about it, whatsoever — this doesn’t seem to happen too frequently. Gunda was my choice this weekend, which received 100 percent of my brief attention span after eating breakfast and chugging a pot of coffee.

Much more than just a documentary, Gunda is an examination of farm life in the Netherlands, which includes a pig, a herd of cows and a one-legged chicken, among others. Mother nature takes center stage as a silent opening leads to a snoring pig, followed by teeny, tiny piglets. The squawking of the babies and the snorting of the uninterested mother pig is a communication technique that I seem to have translated by the conclusion of this hour-and-a-half film.

The movie follows these very young, very cute piglets who can barely keep their eyes open, while fighting for room to feed. At one point there seems to be 11 of them and that they could all become runts… if only they don’t get smashed by the extra-large sow. More keep popping out of a nearby haystack, and I’m wondering how the mama pig doesn’t smother them while sleeping? My answer is almost immediate, as she eventually digs one out from the bottom of the pile, and seemingly steps on the baby, but there really isn’t a conclusion to these events. As the film advances, they grow and they are tolerated as they live and learn how to survive day to day, but their total numbers seemingly dwindle.

The tone quickly switches gears, as extreme close-ups on a group of roosters hunting for food in perpetual silence is shown, which is something I’ve never seen before, much like the one-legged chicken that is shown hopping and flapping around. And then there’s a herd of cows rushing for freedom, as they escape a barn. All of this brings us back to the pigs, which are still fighting for survival while living within a specific hierarchy.

The slow-moving animals here look like they’re constantly sad, whether they actually are or not and the loners on this farm don’t tend to live very long lives, so the herd mentality seems to be a good thing. As a tractor finally arrives, a foreshadowing of the end is nigh. The somewhat grown piglets are hauled away by the farmer (who’s never shown), and the mama pig looks incredibly anxious, a little confused and all alone. Just moments before she was barely tolerating them, followed by her pacing around, trying to figure it all out. Do animals suffer from heartbreak? I’ve got to say so.

This is no Charlotte’s Web or Animal Farm, as the animals don’t actually speak… in fact, there’s no dialogue at all, which only heightens my sensory overload. I’m such a fan of this film for not having any voice overs to decipher the on-screen events. With no commercial breaks and no unnecessary elements to take you out of the on-screen action, I really enjoyed its intentionally slow-developing storyline. This documentary reminds me of the nature shows I watched while growing up, which aired on the local PBS stations, or those that can most recently be found on Animal Planet and BBC America.

The good thing about watching features like this is the wiping away of all sorts of expectations you may have brought to the table, offering something new, different, unexpected and perhaps relevant to your life. I imagine filming this was difficult, as the cameraperson and the rest of the crew did their absolute best not to interfere with the critters to influence their actions. And the looks on the face of my chocolate lab while hearing all the commotions of this film were priceless.

I began to wonder how many animals have ever won major acting awards? While dogs, cats and other small animals have been symbolically voted as mayors of small cities in the past, I cannot recall any critters beating out humans in the category. If you only watch Gunda, you would agree with me. This mother (pig) can act!