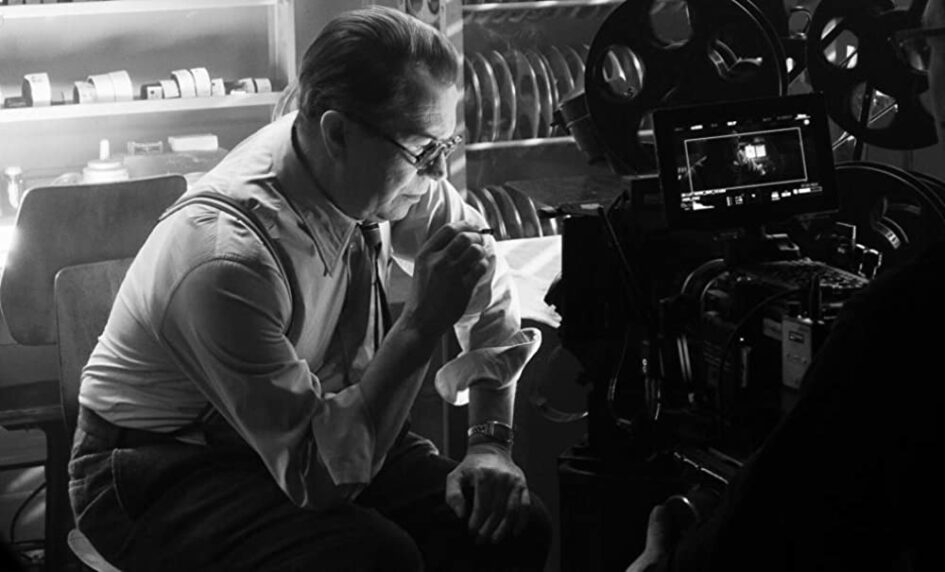 The life of writer Herman J. Mankiewicz (as portrayed by Gary Oldman) gets recreated in Mank.

Per Matt
Throughout the years, a majority of film critics have voted Citizen Kane as the greatest movie of all time. Now, I truly believe it is a great one, but it stands as the second best for me (nothing beats Casablanca, EVER!). Orson Welles was an outsider to the studio system as a filmmaker and the fact that his movie was even made, let alone released, is a very big deal and a huge testament to the filmmaker’s determination. Groundbreaking on many levels, it’s hard to believe what that film might have become without the efforts of one Herman J. Mankiewicz.

Director David Fincher explores Kane‘s roots, but more importantly what the writer went through during a tumultuous time of his life, writing the movie’s script with the feature film Mank.

More than just a biography story or a drama, Mank details a lot of the perceived behind-the-scenes drama for Kane‘s origins. Much of it revolves around the well-publicized efforts of Mankiewicz, who could be reasonably described as a reckless, loose-cannon alcoholic, who also happened to be a genius with words. Before moving to Hollywood, Herman was a New York playwright and film critic, eventually becoming a screenwriter. While working at MGM, he was hired to touch up and fix problematic scripts (including The Wizard of Oz), while often being uncredited. This happened when the Writers Guild was still in its infancy (which is briefly touched upon). Just as the writer was hitting rock bottom, he was approached by Welles with an offer he could not refuse.

As many have previously noted, Citizen Kane tells the tale of a media baron who strongly resembles William Randolph Hearst — who Mankiewicz knew well from his social circles — along with Hearst’s mistress. Mank proceeds to formulate the trials and tribulations the writer attempted to balance while cranking out a script with a broken leg and the enormous pressure he was under by the studio, along with a massive bout of writer’s block.

Mank is a wonderful film. I’ve always enjoyed black-and-white movies and this one does not disappoint. The cinematography is top notch, working hard to recreate the classic time period. Flashbacks help define a washed-up writer who was trimmed from the studio’s payroll. Gary Oldman is great in the lead role, but it’s the supporting cast who are even better. Amanda Seyfried is receiving a lot publicity as Hearst’s real-life mistress, Marion Davies, but I thought Lily Collins’ role was more complex and compact, in comparison, as Mank’s transcriber. There will be many awards nominations in store for this film’s future.

Fincher has seemingly become very picky about the projects he directs, and for good reason. He’s truly in demand. Very much like Mank‘s behind-the-scenes story of Citizen Kane, I’m probably more interested in Fincher’s behind-the-scenes stories with the creation of this movie. Originally written by his father, Jack Fincher, Mank questions Orson Welles’ screenwriting credit, following up on a controversial 1971 New Yorker article, which was later disputed point by point and discredited by film scholars. I wasn’t a huge fan of the politics which David inserted into the script (although it feels topical, in dealing with a socialist running for office), but now I am more interested than ever to find and watch every documentary film dealing with the real-life struggles of Mankiewicz and Welles in Old Hollywood.

As an aside, I absolutely love smartly written dialogue and I’ve become a huge biopic fan. Also, stories concerning writers will always interest me (recent ones include On the Rocks and Shirley). And Mank truly piqued my interest, as I have yearned to live and work in Hollywood’s classic days of yore. For four years I actually lived within the greater Los Angeles area, working on multiple film and television releases in a variety of roles, as I knew Central Casting well (and chuckled with its mentions in the movie). And much like the film, I was well aware of the Writers Guild (their strike practically shut down the industry while I was there).

Hollywood absolutely loves to make movies about itself, where filmmakers and celebrities never get tired of patting themselves on their backs. I absolutely loved Mank, but audiences generally don’t go for this type of topic, so it actually feels right at home as a Netflix flick, although there’s a very good chance it could have won so many awards if it was only released in theaters.

“Every moment of my life is treacherous.”

Mank depicts complicated characters portraying complicated real-life people. In reality, Mankiewicz was a clever man, a clever writer and maybe not too smart with his politics, who wound up burning all of his bridges in Hollywood, losing his place in society. Many saw him as a court jester, but he truly was a genius. After winning the Academy Award for Best Original Screenplay in 1942, Mankiewicz sadly never wrote another original screenplay or worked with Welles again. That was a major third-act complicator.