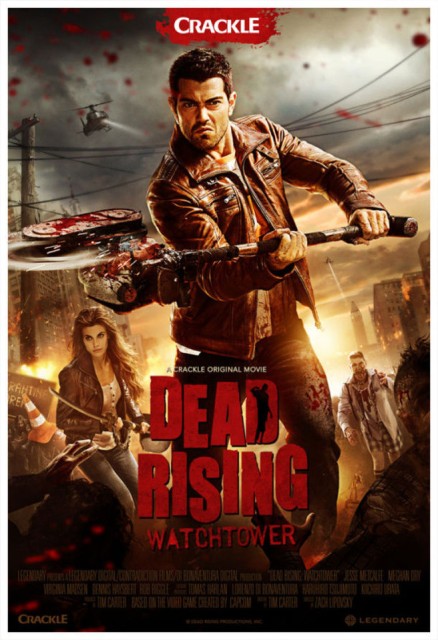 Per Matt
When it comes to video-game adaptations for the big screen, sadly, there’s been more failures than blockbusters, but that track record won’t stop Hollywood from trying to break the ongoing trend. With the arrival of digital distribution, the format may have finally arrived where adaptations with lower budgets will finally get the opportunity to shine and increase awareness.

Dead Rising: Watchtower is one of those movies. Originally released online via Crackle, this movie is based on the Capcom video-game series, occurring somewhere between the events of Dead Rising 2 and Dead Rising 3. There’s been another Zombie outbreak, this time taking place in in East Mission, Oregon. While the city is evacuated, a containment wall is built, hoping to contain the damage to a central location. Inside the quarantine zone, investigative reporter Chase Carter (played by Jesse Metcalfe) and his cameraperson, Jordan (Keegan Connor Tracy) wander around, looking for a scoop, when inexplicably, the government-issued Zombrex drug stops working. Like an alarm clock going off, people instantly transform into the undead and chaos begins. No one seems to react to the outbreak fast enough, even though this is not the first time it has happened (it’s actually the third outbreak within the last 10 years).

Chase eventually teams up with a pair of survivors after getting separated from Jordan, but one of them holds a deadly secret that could threaten their lives. Throughout the movie, Chase records and posts his videos online, reporting his first-hand experience to a local news station. Frank West, the hero of the original Dead Rising video game, appears as a guest of the station, giving hilarious commentary based on his past experiences, while the drama unfolds.

Dead Rising: Watchtower features replaceable main characters, a storyline that mimics Hurricane Katrina, a few action scenes, outrageous Boss Battles, plenty of conspiracy theories, many references to past games and even a couple of meta moments. The movie doesn’t take itself too seriously, much like the video-game franchise and at times is somewhat campy, but fun. Meghan Ory has a killer role and Dennis Haysbert brings gravitas to General Lyons.

As a gamer, I did not enjoy the repetitiveness or the gameplay of the original Dead Rising game, so I was naturally hesitant to watch this movie. Surprisingly, I enjoyed it. The highlight of the film is Rob Riggle’s outrageous portrayal of Frank West, who fits the character perfectly. Apparently, this movie was successful enough to warrant a sequel (Dead Rising: Watchtower 2), which has been scheduled to be released in the Spring of 2016. Hopefully, that means Frank West will have a bigger role, getting out from behind the news desk and showing off his survival skills.

Strength: Decent adaptation of a video-game franchise for the big screen.
Weakness: Unoriginal storyline with replaceable characters.
WTF Moment: Be on the lookout for many Servbots, even an on-screen countdown, just like those in the video games!

Notable Quotes:
– “Only an idiot wants to see a Zombie.”
– “Talkin’ to us ain’t gonna help you at all.”
– “You’re gonna be bigger than Frank West.”
– “Remember to build weapons. Lots of weapons.”
– “This may be the worst run government operation since Katrina.”