Digging Up the Dead at Walker Stalker 2017

Does anyone know the last time that John de Lancie (Q from Star Trek TNG) came through Nashville to a con? The answer is sometime in the late ’90s or early 2000s. That’s the last time I attended a convention.

Usually, I let them slip up on me and wait until the last minute, leaving me unable to get tickets. Dragon Con, Full Moon, Lexington Comic & Toy Convention, Walker Stalker, you name it and my ability to procrastinate is matched only by the complete vacuum that exists inside my wallet. I’m a writer, after all, and it always seems to be that when I do have the drive and the chance to get tickets for something really amazing like this, I end up flat broke. Walker Stalker 2017 was going to be no exception to this until Lucas (fellow ZIMB contributor, Hypericon top dog and Zombie Walk partner in crime) sent me a message saying he had an extra vendor pass.

Hypericon — another great Nashville-based fan convention happening June 16-18 this year — had a booth set up inside the main hall for Walker Stalker and was doing some advertising for the Nashville Zombie Walk as well. Using that as a segue, Lucas gave me the opportunity to explore the convention Sunday afternoon, before it wrapped up. Hundreds of vendors, fans and some of our favorite celebrities from The Walking Dead were in attendance from all around the country and it was absolutely incredible. Down every aisle were a dozen booths selling horror and fandom-related everything, as random Zombies shuffled in and out of the teeming crowd. A small stage was set up in the middle of the sales area, while the crowds seeking meet-and-greets and autographs were in a completely different section of the hall, queued up and waiting. 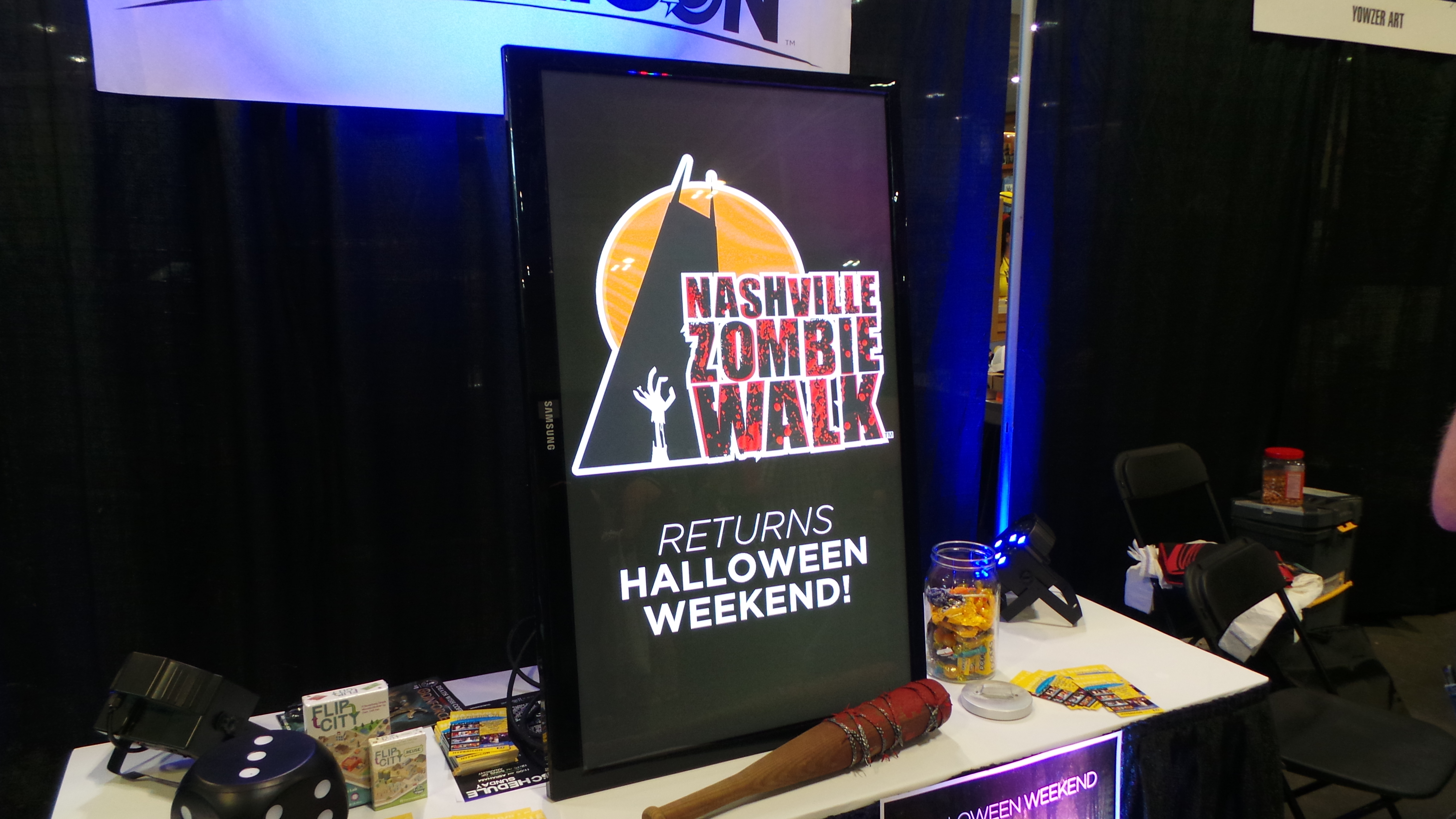 The Hypericon booth featuring an important announcement about The Nashville Zombie Walk.

I spent my afternoon studying each booth, marveling at all the horror-related everything and feeling as if I’d passed over that rainbow bridge into my own nerdy Valhalla. Handmade crafts and mass-produced collectibles were available around every corner. From steampunk home décor and gory toys to wood-burned movie posters and books, it was a horror merchandising paradise. There were Rubik’s Cubes painted like Lemarchand’s box and shooting galleries for a laser tag event, where you actually go head to head against Zombies and monsters. The coolest thing, by far, was the taxidermist selling snow globes with fetal pigs and armadillos, not to mention his homemade “horn dog.”  Because it’s that weird, macabre sort of stuff that really gets me excited, and knowing that there are people out there with the skills to make art and beauty out of death and horror is just astounding to me. Meanwhile, tattoo artists were busy inking fans near the main entrance with everything from pre-made designs to custom work being done on the spot. You could get Jeffery Dean Morgan’s autograph on your arm and walk to the other side of the convention hall and have it permanently engraved on you. “Property of Negan.”

And for fans who wanted to hear interviews and commentary from the stars without paying fees or sitting in long lines, the smaller stage in the vendor valley was perfect. Almost immediately after I arrived, Herschel (Georgia’s own Scott Wilson) came out and talked about his time on the show, as well as his fifty years on screen, from classics like In the Heat of the Night, to his most recent appearances on The OA. There were other cast members who appeared through the weekend on the same stage, alleviating some of the crowd on the other side of the hall. 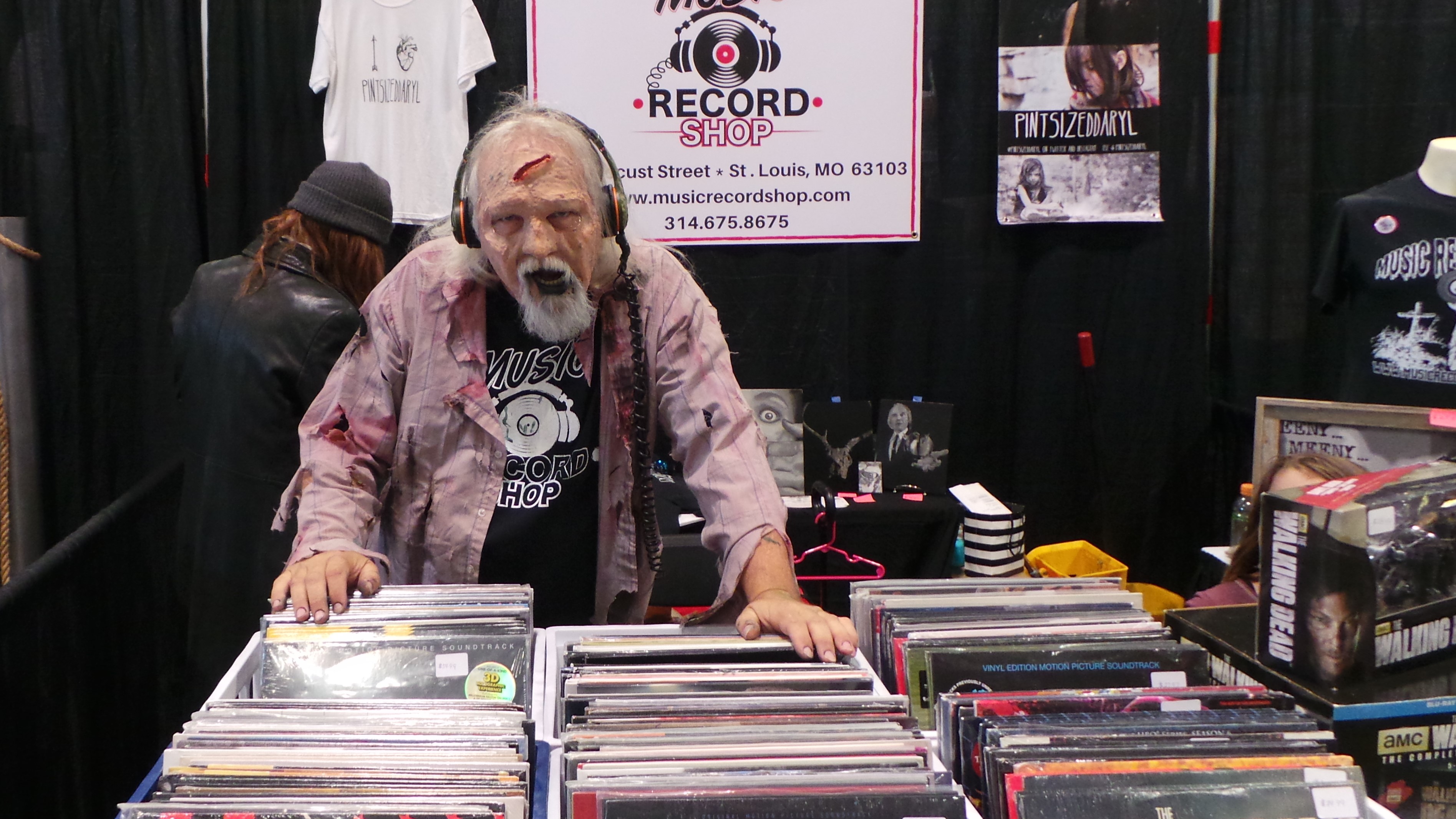 My very first con was a Star Trek convention in the early ’90s, where Marina Sirtis unloaded on fans for asking her questions. With few exceptions, it soured me to the notion of going to these events for years. Walker Stalker more than made up for being cussed by Counselor Troi, though. It was amazing to see fans and creators gathered together, sharing their love for a genre that has literally inspired an entire subculture. From movies to music, books, games, fine art and schools of thought have all exploded from the ongoing love of scary movies, and Walker Stalker brought some of the best and brightest creators to the heart of Middle Tennessee. I can’t wait for next year.