Even During a Nuclear Winter, Power Corrupts Snowpiercer 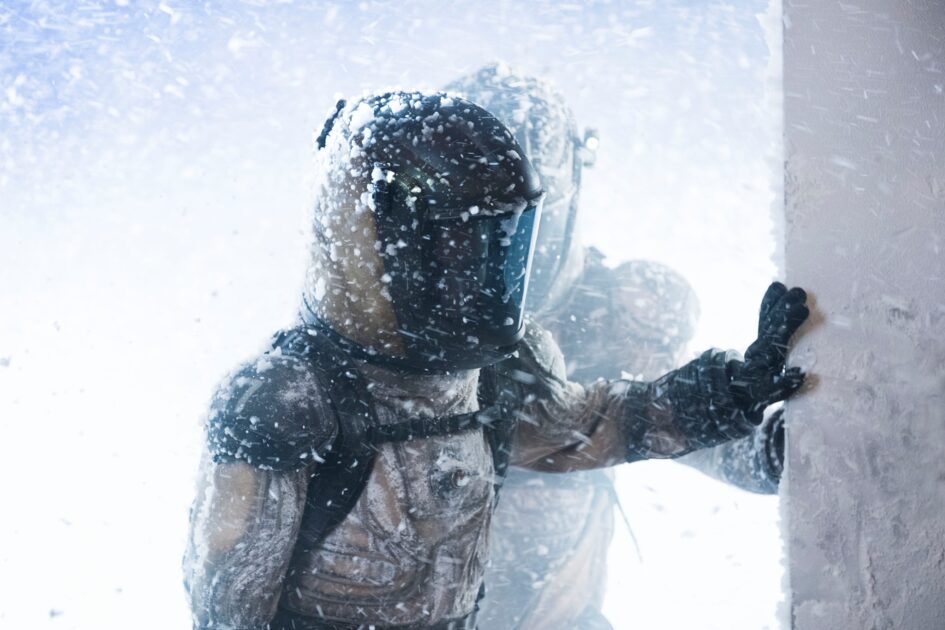 Catastrophes come in all shapes and sizes, whether they’re man-made or natural, taking place in the modern world or during a future Apocalypse. Or they’re simply inevitable. Somehow, Snowpiercer‘s second season involves each of those elements, wrapped up in a bow, for all to enjoy.

The basis for this show was adapted from filmmaker Bong Joon Ho’s original film. The series premiere featured a story about class structure, which sparked a working-class revolution. Once that fight concluded, the life-or-death struggles during a a nuclear winter became its focus, when cliques and attempts at social climbing felt unnecessary. As the planet’s only surviving members of the human race live within these 1,034 cars, it seems only natural that whoever was the Big Boss would at some point get power hungry, eventually turning to the dark side. That scenario (plus a mixture of baby mama drama and a forced love triangle) receive the spotlight in Season 2, veering far away from the roots of the original sci-fi storyline.

A one-word summary of the show could simply be “sabotage.” It was sabotage that originally started the whole shebang, as Chief Engineer Melanie Cavill (played by Jennifer Connelly) originally departed without the vehicle’s owner, Mr. Wilford (Sean Bean). The second season revealed a smaller utility train had also been created, led by Wilford and his remaining crew, and he was none too happy about losing his prized possession. So, when they merged, all hell was released upon the passengers, as he sabotaged his former train from the inside.

Wilford uses fear to rule the trains, while Melanie’s common laws fell by the wayside once her weather balloons required her to leave the premises. Once that happened, it seemed the series was headed into a void. Hope was used to inspire the trains’ population and then turned them against themselves, while the two-part season finale gave rise (again) to the good guys.

“What fresh hell is this?”

First class struggles, then a revolution, and eventually power-hungry leaders became common themes, and all its social commentary was abandoned. As characters grew into new roles, the show mostly dealt with Wilford’s return the throne. I’m VERY curious to learn how involved Bong Joon Ho has been with this show. After winning the Oscar for Parasite, I’ve got a feeling he’s been more invested in other big-screen endeavors than this small-screen adaptation.

Already renewed for a third season, the show has clearly detoured away from the feature film’s story, becoming something else entirely. But I really can’t define what that is. Yes, it’s a drama, but the last five minutes of Episode 10 venture into a dark, harsh snowy location, using effective horror elements that bring great flashbacks of John Carpenter’s The Thing to mind. This is the direction I’d love to see more from the show, but taking place within the claustrophobic confines of the train.

There’s several unresolved plot threads, including one which involves unrequested medical experiments, but what felt like a major rip-off was the handling of Connelly’s character. A never-ending tease kept promising Cavill would eventually return to the train, but that reunion never happened. In fact, her character was practically written off the show half-way through the season and her apparent off-screen death was a slap in the face to fans of the show.

Now, it’s totally possible the Oscar-winning actress was ready to move onto bigger and better projects, but I’ve got a funny feeling her character (which is proudly featured in every single commercial) might just magically return next season to wrap up this franchise, which already feels like it’s running off the rails…