Even Serial Killers Live Next to Someone: Summer of ’84 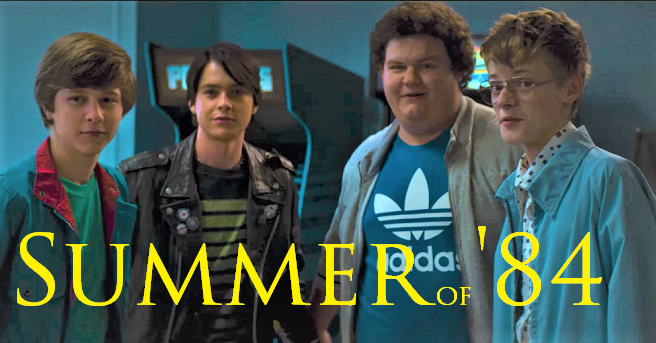 Hello horror fan. I get it, you are interested in Summer of ’84 for the same reason I felt compelled to watch it. It’s not because you liked Stranger Things (as all the buzz indicates one would be interested in watching this film). As a horror fan, that show is only so so. It’s not because the plot involving a group of friends trying to figure out who a local serial killer is makes for a uniquely compelling film. No, you are interested in the fact that a horror film takes place in the heyday of horror films: the ’80s. You are hoping for a film devoid of CGI monsters. You wouldn’t mind a nostalgic power ballad. You want a fast-moving plot that gets grim fast. You aren’t just looking for nostalgia from a bygone time, but a movie made like the movies made from that time. Summer of ’84 is a coming of age film with a mysterious vibe, similar to say The ‘Burbs meets Stand By Me, if both films were directed by Alfred Hitchcock. It’s not exactly a film like the one you, the consummate horror fan, are hoping for, but that doesn’t mean it’s not a good film in its own right.

In the film, during the summer of 1984, a group of 15-year-old friends spends the summer investigating some murders caused by a local serial killer. Those of you who lived through the ’80s will remember it was a time when child kidnappings, satanic cults and serial killers were making the news and daytime talk shows regularly. Our group of investigators include Davey (Graham Verchere) a conspiracy-theory nut, Woody (Caleb Emery), who is mature and just a bit chunky, Eats (Judah Lewis), the cool rocker and Farraday (Cory Gruter-Andrew), the nerd. After a serial killer contacts the local newspaper, Davey, whose dad works for the local news station, becomes convinced his neighbor, a cop named Wayne Mackey (Rich Sommer), is the killer.

There is no way around the fact that comparisons will be made to Stranger Things. The thing is, I have trouble paying attention to Stranger Things, while Summer of ’84 held my attention with no problem. The film is closer to a Stephen King film than a Stephen Spielberg one, which for me, is a good thing. Summer of ’84 has no problem fully embracing gore, but at the right time, and not too gratuitously. The ending will leave viewers breathless, and perhaps… hoping for a sequel.

The main problem with the film is the pacing. This film, like the vast majority of both movies and series out today, suffers from a slow burn. The film has a decent run time of one hour and 45 minutes, but it takes almost a full half hour before anything happens. Other than that, the acting is spot on, the direction is good and the gore… it’s not CGI. If you are looking for a summer horror film to tide you over until The Nun releases in a week, this is the film I suggest to watch.

I give Summer of ’84 four out of five stars for its nostalgia, special fx and great actors. It is certainly a must see for horror fans this summer. Summer of ’84 is currently in theaters and available on demand on Vudu.