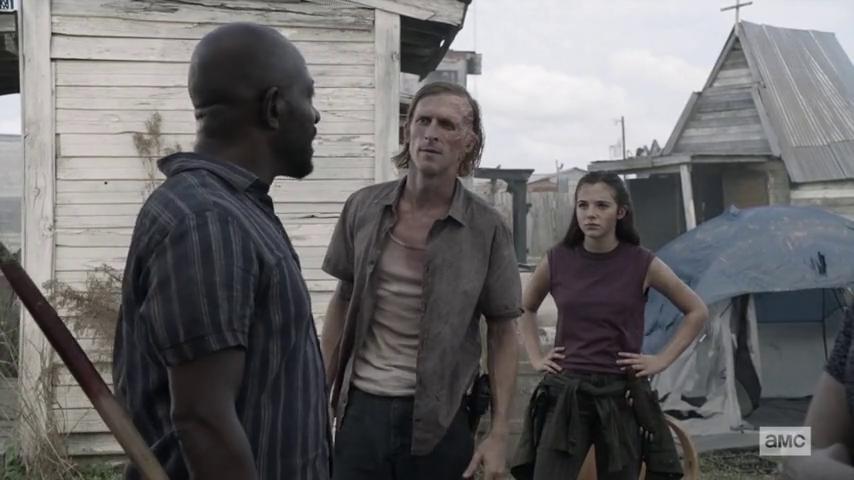 Tough calls can easily flip the best-laid plans. That’s why the last few minutes of Fear The Walking Dead‘s season finale, “End of the Line,” actually feel appropriate for the franchise (along with its title), as a main character is critically wounded and profusely bleeding as a wandering herd of walkers immediately descend upon their prospective meal… possibly creating long-lasting effects in The Walking Dead Universe to come.

Fear’s Season 5 had plenty of ups and downs that made lasting impressions for not only the show, but for the mothership, The Walking Dead. One of the breakout episodes this season involved Isabelle, who’s a part of the mysterious helicopter unit from TWD, who grabbed Rick’s wounded body in his last episode of that series. A little background information was given, but plenty of questions are raised about the group’s ongoing mission.

Morgan’s Crew backed up their words and went out of their way to help a lot of people in need throughout more than a few standalone episodes. Then there was Logan (Max Headroom‘s Matt Frewer). Long foreshadowed as the Big Bad of this season, he only appeared in a few scattered episodes before abruptly dying at the hands of Virginia (Colbie Minifie) and her quickly expanding empire. Unfortunately, Morgan’s Crew was a big benefactor in her group’s assets. At times, Virginia felt unimportant and powerless, and at others she seemed to be the most powerful antagonist in existence. Hence, the season’s biggest weakness: The direction.

While the characters, themselves, developed throughout the season (at times a little too slowly, if you ask me), the overall story arcs were poorly developed. Each episode totally focused on the immediate events directly in front of it, with some teaser elements dropped into the conclusion that never were approached for three to five episodes later at a time. Frewer’s talents were basically wasted this year, and that’s a damn shame. The actor is great and I was expecting a LOT more from his character. When it was convenient for the storyline, he’d take center stage… then he’d disappear for episodes at a time. And then he was gone.

By the time the 16th episode of the season had concluded, there were quite a few highlights, including:

It seemed odd for the whole caravan to be together, at once, at the end, putting their future on the line… leading to their demise. A classic double-cross led to Morgan losing a lot of blood after being shot in his shoulder. How will he miraculously get out of this predicament, much like he always has in the past? With New York Comic-Con quickly approaching, will there be an announcement for yet more crossover characters from the mothership? It feels like Sherry will finally make her appearance… but will there be other minor characters joining her?

Where does Isabelle and the helicopter work itself into next season’s storyline? And how will it affect TWD? Where does Rick’s Gang get worked into the scenario?

“At the end of the day, people are people. And they’re just gonna leave you wanting more.”

With a second religious-based character with a bad backstory, what does that say about the producers of both Walking Dead shows? Daniel and his cat with serious behavioral issues were a definite highlight, although sparingly used. Dwight finally got some serious dialogue as the season ended,  not having much to do throughout the year. I was really looking forward to seeing Morgan’s Crew move into Humbug’s Gulch. Unfortunately, the producers had other plans.

“Being a realist is not a realistic option anymore.”

As much as I really enjoyed the past two seasons of Fear, Season 5 has been somewhat of a let-down. There was so much build up to this past year that faded away as the season progressed. Scott M. Gimple, as well as Andrew Chambliss and Ian Goldberg should receive the brunt of the blame, but it can all be wiped away with a kick-ass season of story-telling next year. But what if Morgan Jones doesn’t make it out alive, after crossing over into a new series? That would be some very, very bad writing, as well as a very big mistake for the sister series, as TWD looks very likely to be closing up show within a couple of years. I really wanted to see more from the show’s mythology this season and it never materialized. Unfortunately, it is what it is.

“Spaghetti ain’t simple, and it’s usually simple one way or another.”