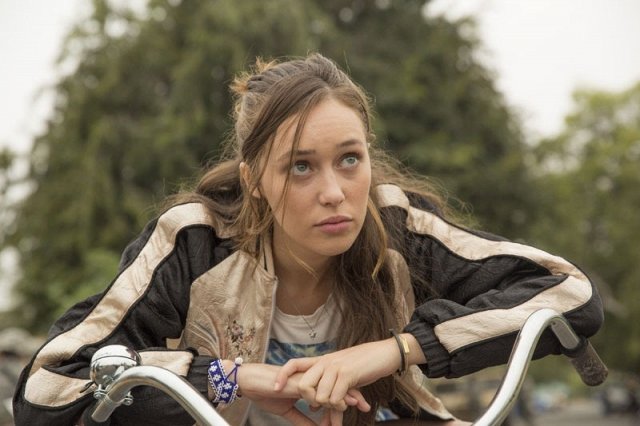 “The game has changed.”

As Fear the Walking Dead opens with episode 5, all of a sudden, there’s a whole lot going on!

Liza is helping Dr. Exner down at the makeshift hospital, Madison is still in denial about the Zombie Apocalypse and Travis hopes to talk to the military in order to get his family and friends back. Along the way, he makes a little threat, participates in target practice and returns home empty handed. Alicia’s personality has inexplicably changed. She’s no longer in grief or suicidal. Paired with Chris, they break into the neighbor’s house, try on their clothes and eventually release their aggression by breaking stuff.

Ofelia lures her soldier boyfriend into her house, who then gets kidnapped by Old Man Salazar, preparing to trade the soldier for Griselda and Nick… but not until he gets some information. He’s still the smartest man of the group and puts his barbershop razors to good use (I didn’t realize he grabbed them before bailing his downtown home).

We’re beginning to see some unrest among the ranks of the National Guard. The soldiers are running ragged, working 50 hours straight and some are eventually going AWOL. After making the grand statement, “I can do anything I want. I got guns,” it seems Lt. Moyers won’t be making the return trip home. The remaining soldiers loot the neighborhood before prepping to terminate the neighbors the following day, as revealed by the hostage.

Griselda goes into septic shock after surgery, before dying. In addition to all of this, Nick has seemingly made a new friend in the hospital holding cell. Victor Strand (played by Colman Domingo) is still a mystery (although he feels like a slimy salesman — most likely a future antagonist), who who teams up with Nick, hoping to survive.

There’s quite a bit of action, new characters are introduced, more of the story is revealed and even some walker deaths take place in this very busy episode. As there’s only one episode remaining, it’s a shame so many previous episodes were wasted in order to get to this exciting point of the storyline. Just as everything is getting interesting, Season 1 is about to end. If it wraps on a high note, it will be worth it.

Strength: Plenty of great story elements kept this episode moving.
Weakness: It took five episodes to get to this point, which is way too long.
WTF Moment: Cobalt is the command code to initiate an evac from the LA basin.

Notable Quotes:
– “This is how we bring them home.”
– “Some people don’t trust the government.”
– “Sometimes everything we do isn’t enough.”
– “One slip up, one what if and we all start finding out how the neighbors taste.”
– “The dead may be walking among us, but it’s still the United States of America.”
– “What kind of man does that? Puts his wife and children in the hands of strangers.”