Fear the Walking Dead: The Dog 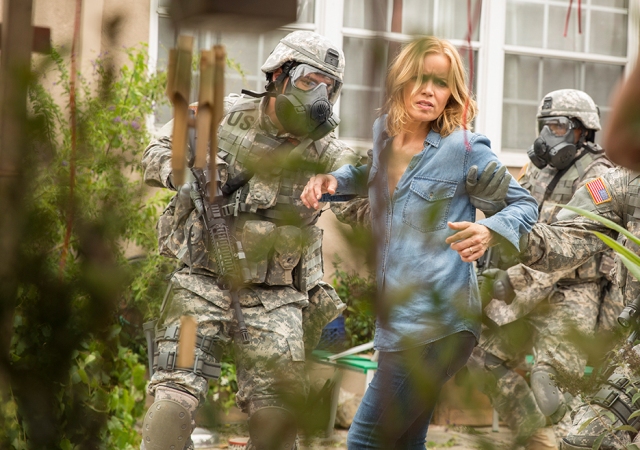 The neighbors are restless.

Fear the Walking Dead returns from a two-week sabbatical with Episode 3: The Dog.

Finally, the storyline is moving along and the fall of civilization is actually happening… if only this was the pilot episode, but I digress.

As the Clark family waits in the suburbs for the rest of the group to return and flee to the desert, the Barber Shop crew really has no escape plan. When the building’s walls get warm, the action really heats up. Fleeing their shelter, the Salazar and Manawa families witness the true reason for the riots.

Suburbia is literally the calm within the storm, as the Clarks bond over Monopoly, while looting, rioting and chaos breaks out in downtown L.A. Fleeing danger, it seems screenwriter Jack LoGiudice took a page from the Zombie obstacle course, The Walking Dead Escape. Not really sure how, exactly, so much destruction is going on around the two fleeing families, but their escape vehicle is virtually untouched and they actually escape the battle zone — but this is a TV show. Chalk this one up to an extreme case of suspension of disbelief.

Checkpoints have been set up, citizens cannot leave without clearance, a citywide curfew has taken effect, hospitals are already overrun (shout out to Rick Grimes, get better soon!) and all the power grids are failing. The national guard has been requested by the governors of 11 states, who have declared a general state of emergency and still nothing prevents this family, joined by the Barber Shop group, from getting home.

For some reason, Madison (played by Kim Dickens) still doesn’t want to tell her daughter, Alicia (Alycia Debnam-Carey), what’s going on. Makes sense. Let’s pretend the Zombie Apocalypse isn’t happening by ignoring it. Breaking into the neighbor’s house for protection, Nick (Frank Dillane) is still the smartest character on this show.

The neighbor’s poor dog gets eaten by its owner (PETA will not be happy) and nobody seems to obey their elders (in any of the families, actually), which leads to dangerous results. Two dysfunctional families are reunited with a headshot and Travis (Cliff Curtis) makes promises he can’t keep (“You’re gonna be all right. We all will be.”).

There’s more Baby Mama Drama between Travis’ two women and we’re really digging Old Man Salazar (Rubén Blades). He truly understands the survival of the fittest. The show’s filmmakers are finding creative ways to kill off secondary characters and the slow-burn storyline is finally speeding up a bit. This is clearly the best episode so far.

Strength: Storyline gets a boost and finally moves along.
Weakness: Famous last words: “You’re never gonna lose me.”
WTF Moment: Even when the combined families try to leave town, they’re brought back to reality when the National Guard finally arrives.