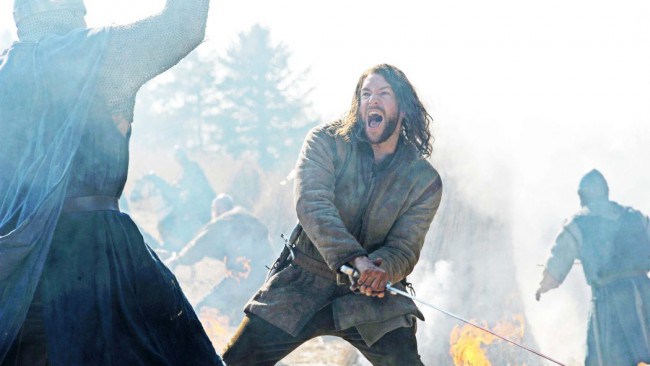 Kurt Sutter is a busy man. Before he wrapped the very first TV series he created, Sons of Anarchy, he was already plotting out the storyline details for his next series, The Bastard Executioner.

Also airing on FX, this new TV series is about as far from his modern-day Northern California motorcycle club as the series creator could get. The Bastard Executioner is a historical-fiction drama based in the early 14th century. The two-hour series premiere focused on Wilkin Brattle (nobly played by Lee Jones), a powerful knight fighting for Edward I of England. Betrayed by a local baron, he is left for dead on the battlefield and has a near-death experience, vowing never to fight with his sword again.

Resuming a somewhat normal life as a peasant, Baron Ventris’ tax collecting is destroying Wilk’s life (along with everyone else living within his shire), so they attack. After mounting a couple of successful raids, the Baron strikes back, wiping out all the women, children and elders of the village. This leads Wilk back to the battlefield, breaking a vow he made while sensing a heavenly vision.

After successfully defeating Baron Ventris, the true drama begins as Wilks and Sir Cormac (played by Ed Sheeran) return the dead to Castle Ventris but somehow get drafted into working for the very family they despise. Who will become the next big bad guy for the series? Season 1 of The Bastard Executioner only consists of 10 episodes, so tune in or you might miss out.

With nudity, sex, medieval toilets, gory brutality, a witch, beastiality jokes and a dragon, the series feels like Game of Thrones for basic cable.

Wilkin is a mystery to his friends and family, dealing with visions of angels that seemingly only he can see and dueling with every-day demons that surround him. Gruffudd “The Wolf” portrays a powerful secondary character who will hopefully shine with the spotlight and definitely keep your eyes trained on Milus (Stephen Moyer), who’s a fiendish rascal, but it’s the real-life couple of Katey Sagal (portraying the healer/witch with an odd speech pattern) and her assistant, The Dark Mute (played by her husband, Kurt Sutter), who hold the most intrigue, even though they are not the main characters.

As someone who hasn’t watched The Wire or Sons of Anarchy, this is my first exposure to Kurt Sutter. I’ve got to say the storyline is decent and probably strong enough for me to return for multiple episodes, but there were two big negatives I took away from the pilot episode. First of all, there were so many different locations listed within the first two hours, it’s more than a little confusing trying to decipher the layout of this TV show’s universe. I would’ve tried to compact them all, if at all possible.

And as much as I like the premise and the TV show as a whole, I was literally nauseous after watching the pilot. There were so many extreme close-ups and shaky camera angles used, it was enough to conjure up motion sickness (and my breakfast). This show is definitely not for the weak of heart.

Strength: Great production value, transports you back to the 14th century…
Weakness: Enough shaky cameras to bring on motion sickness.
WTF Moment: In the heat of battle, crotch-shots are fair game.

Notable Quotes:
– “Mutton troubles, my friend?”
– “We’ve all earned this horror.”
– “I need a man with the heart of a dragon.”
– “A plan hatched by a witch… what’s to worry?”
– “The spill layer of the river swims with sickness.”
– “I live with the terror of your betrayal every day.”
– “Wealth, my lord, is the foundation of any temple of power.”
– “There’s nothing more dangerous than a Welshman who has nothing to lose.”