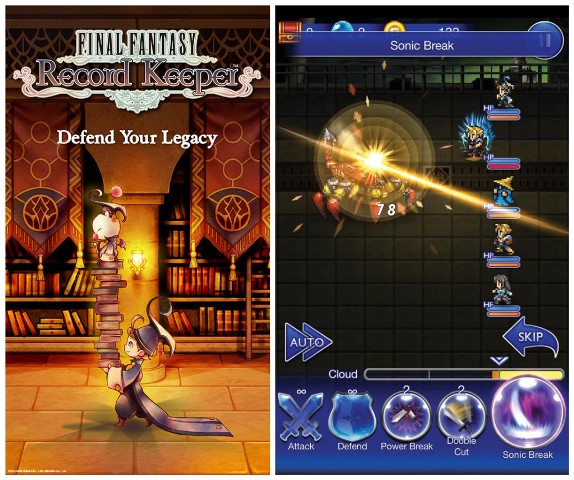 Final Fantasy. Few video games reach an epic status where each game in the series conjures up vivid memories of consoles of yore. Ask any gamer of the last 25 years and they’ll have their own emotional moment from the various Final Fantasy games. To one gamer, Sephiroth recalls time spent by the PlayStation and the One Winged Angel theme. Another may never forget Aerith’s fate. Others still will recall fondly the dance between Squall and Rinoa in FF VIII. Many can recite the opera scene between Locke and Celes of VI (IV in the United States). And for the oldest of the old school, we’ll never forget firing up the original FF on the NES in 1990 and hearing the scales of the prelude theme, echoed in each game since.

Final Fantasy Record Keeper (FFRK) for iOS mixes classic RPG gameplay with nostalgic characters and 8-bit music in a traditional level-grinding mobile game. But where most games entice the player to continuously level up to crush stronger monsters, FFRK encourages you to keep playing to restore the history of the classic games.

The basic plot of FFRK revolves around a world of record keepers, led by Dr. Mog, the Moogle, one of the cute cat-like iconic creatures from the FF series. An unknown threat in the form of an ominous dark cloud has erased the paintings of the records. The paintings depict scenes of the heroes and their exploits. The player is represented as one of the young apprentice record keepers. With the guidance of Dr. Mog, through an elaborate tutorial, the record keeper joins forces with rescued heroes of the Final Fantasy universe to recover more records and heroes.

The record archive consists of different realms, each one a different volume of the series. Upon entering a realm, the player can chose the next painting to rescue. Each painting represents a location or scene from the respective Final Fantasy. For example, FF VII starts with Mako Reactor No. 1, the first scene from that game. To recover the painting, the player creates a dungeon party consisting of five members, to enter the dungeon of that painting.

GAMEPLAY
Most dungeons consist of multiple battles, each battle consisting of multiple rounds of classic 8 or 16-bit RPG combat. The last battle of some dungeons consist of a Boss Battle. Upon completion of a dungeon, the player is rated, and the next more challenging painting is available to recover. If the party dies during a battle, all progress is lost and the player will have to start over to clear the dungeon. Each battle costs some stamina, regenerated slowly over time. This ensures the player will not grind out levels continuously for hours on end.

Combat is handled with the Active Time Battle. Each character has the option to fight, defend, or use an ability if they are able and that ability is equipped. Abilities range from magic to summoning to special combat abilities. Veteran FF players will recognize the wide variety of abilities from their respective games.

As the character hits or is hit in combat, their Soul Gauge meter fills. When it reaches a certain level, the character can then perform a Soul Break, a special one-time ability, unique for the character. Cloud has a Sonic Break, a triple sword slash. Tifa has Beat Rush, unleashing a flurry of punches on one target.

Players earn loot in the form of Relics (arms and armor), orbs (used to create or hone abilities) or Gil, the monetary system of the game. Players can also earn Mythril, a special currency used to heal a party while in the middle of a dungeon, or to purchase special Rare Relics. Rare Relics offer great offense or defense than common relics. Some Rare Relics are hero specific, which allow the hero different Soul Breaks.

Characters level up as they gain experience defeating monsters in various dungeons. However, the player can also level up relics and abilities. The relic can be upgraded by using other relics or special dropped items. With the cost of some Gil, the relic becomes more powerful. Relics can be combined with identical relics to create an even stronger relic.

While it seems like a simple game, there is a complexity within the equipment and ability upgrading system that is necessary to learn to delve further into the game.

STYLE
From the traditional opening prelude, the game oozes Final Fantasy aesthetic. This game was composed as a ode to the series and they didn’t skimp on the details. Each realm uses music directly from the game it represents. Dungeon selection screens blast old-school overworld tunes while you choose which painting to liberate. Battles use actual game battle music. Every screen, whether it be the party management screen or the menu screen, has accompanying music from one of the various games of the series. Even pressing an on-screen button uses the traditional Final Fantasy sound-effect beep. It’s a joy to hear the songs you listened to hour upon hour when playing the original games after not having heard them for many years.

The visuals mix 16-bit sprites in combat to well-polished designs on the various selection or menu screens. Even polygon characters from latter-generation consoles receive the 2D treatment. Cloud and Tidus’ 2D sprites look as if they easily could have been hidden characters in Final Fantasy VI. It seems like where it could be used, original sprites are incorporated into the game, whether it be character, monster or background. The menus also display the royal blue that was the default color of many a Final Fantasy menu screens.

There are an abundance of little touches that won’t go unnoticed by the longtime fan. It may be a Moogle in the form of Dr. Mog or part of a menu background art, or one of the variations of the Chocobo theme. Magic spells use the same nomenclature as the latter FF games. And as always, there is a character named Cid, this time in the form of the equipment and abilities manager. Even the dissolve into combat from the dungeon select screens seem right out of the original games.

One of my favorite things to do is create an all-star cast of characters from amongst the many Final Fantasy series. One of my new favorite groups consists of an all-female cast, including Rydia (FF IV), Terra and Celes (FF VI), and Tifa and Aerith (FF VII). Each player will find their own favorites to make their own super team. 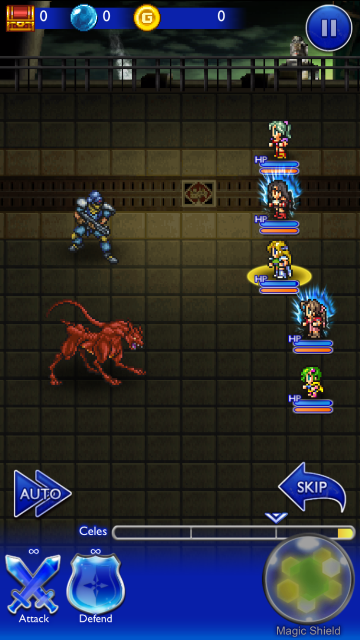 An all-female group from FF IV, VI and VII.

ADDITIONAL CONTENT
As of this writing, FFRK explores FF I, II, IV, V, VI, VII and X. FF VIII is coming and it seems the remainder of the non-MMORPG will be explored. The game promises more content with future updates. Within the first week, the first update added Tifa and Sephiroth from FF VII as unlockable characters. Week two added Cecil from FF IV. As of this post, Aerith (FF VII), Cyan (FF VI), Terra (FF VI) and Celes (VI) have also been made available.

The overall battle gameplay remains the same, but the game offers different events to achieve new characters. It offers some some variation to the traditional battle, level up and repeat grind.

Anyone with a fondness for classic video games should give Final Fantasy Record Keeper a chance. The game uses classic RPG combat modified for a mobile device, combined with the Final Fantasy aesthetic to make it enjoyable and fun. And as a free download, there’s little excuse not to give it a try.