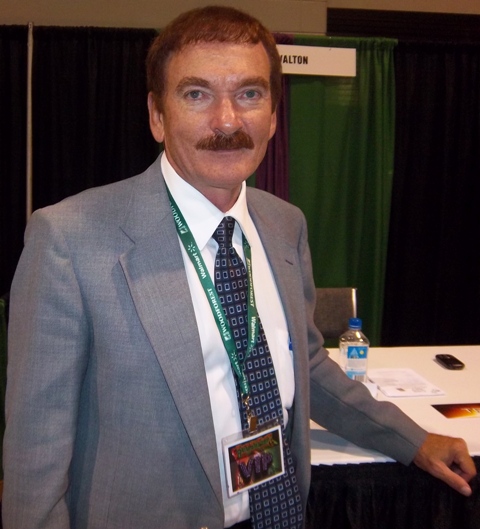 On Wednesday, November 5, 1975, Travis Walton’s life changed, forever. While working as a logger in Northeastern Arizona, he was abducted, right in front of his coworkers. After a frantic and unsuccessful search yielded no results, he reappeared five days later, with an incredible story to tell. Fire in the Sky was the movie adaptation of his experience, released many years later. At ScareFest, Travis discusses his alien abduction, drops hints about a movie remake and sets the record straight with his updated book, Fire in the Sky.

Did you ever have any animosity toward your coworkers, for leaving you in the woods?
– “I didn’t have the animosity about them leaving, like ‘You’re a coward. You weren’t there to save me.’ It wasn’t like that. I think it actually started with people saying all this stuff about us and this whole crazy thing wouldn’t even be happening if you hadn’t have gotten out and gotten close to it. I was kind of getting recriminations from that end, that generated a little bit of feeling, but that’s a very minor thing. The dominant feeling, that I have, is gratitude, to those guys, for having the courage to come back, that night, and try to save me. They had every excuse to keep right on going, to get help, but they opted to come back and see if they could help. I’m grateful for that.”

When you awakened in the craft, you found a helmeted creature. Did it ever communicate with you?
– “He was wearing a helmet and he wasn’t answering me, so I thought it might be because of the helmet. But when others were dressed like him, except for the helmet, didn’t answer me either, I started to become alarmed, about the lack of response. But when I was struggling with them, up close, the screams caused them to wince, so I knew they could hear me, but they didn’t seem willing to speak to me. I didn’t get any type of telepathic impression from them.”

Do you think they are aliens or some other creature?
– “For a while, I speculated — and it’s still possible — they were representatives of some Earth-based agency, but now I’m leaning more and more towards the idea that there are people out there who look like us. As a matter of fact, I think the so-called Greys are a number of groups that are all lumped together just because they happen to look similar.”

“I’ve done a lot of thinking about that, now, and similar environments produce similar forms. You look around and see examples of parallel evolution in animals, all over the planet. You know, if it’s happening here, it’s certainly happening in the universe. It’s my hunch — Mark my words: It’s only my opinion — when they get to other planets, you are not going to find these googly, weird, unimaginably strange monsters so much as you will be seeing plants and animals and forms of life that are so similar to what’s on Earth. That’s what’s going to be astonishing. There’ll be notable exceptions. We already know about some bizarre creatures that are extinct now, but basically, trees will be trees and fish will look like fish. It’ll be interesting to see the variations, but the similarities are what’s going to be astonish most people.”

After you were returned, how much time had passed before you went public?
– “I tried to lay low and avoid the media, but I found out if I refused to do the interview, the story would continue, but it would take a more negative slant. It really became quite obvious that in order to counter a lot of the rumors that were going along, I really needed to get out there and set the record straight.”

After you returned, did you have any sort of health issues? Were there any implants?
– “I had upper-body x-rays that would’ve revealed anything that was more opaque than body tissues. Nothing was detected. I really don’t think I have implants. The nature of my being taken aboard is not your typical ‘abduction.’ I think it would be more accurate, now, to call it an ambulance call, rather than an abduction. Because I got close and got myself hurt, accidentally, they were obligated to try to revive me.”

Initially, I learned a lot about your story through Coast to Coast AM. Did that program help get your story to the public?
– “I really think those kinds of outlets help to educate the public in a way that’s light-years ahead of where we were back then. The whole atmosphere and the receptivity in the general public has changed. Back then, they didn’t know of a single planet outside this solar system and now they’ve identified thousands of them. And just this last year, NASA said it’s a virtual certainty that there are more planets, than stars, in our galaxy, the Milky Way. The routineness of the shuttle missions and the missions to Mars have sort of opened up the public’s mind to the reality that we’re not the center of the universe.”

Is there any chance for an updated release for the Fire in the Sky film?
– “I’m looking to try to get a Blu-ray version done with a voice-over between me and the screenwriter and maybe some other people involved. I’ll have to talk them into it.”

Have there been any talks of a remake for Fire in the Sky?
– “Yeah. I’ve been in discussions with several different production companies about a remake. I think it’s inevitable. It will happen, eventually. There’s a tremendous demand for it. I get a lot of e-mails about that. One day, I’ll bring all those e-mails into a studio and say, ‘The market’s there. Let’s do this.'”

You’re currently touring with your book, Fire in the Sky. Is this a new book?
– “I did an updated edition three years after the movie came out, but once that went out of print, online copies were going for hundreds of dollars. I figured I’d better get out there and produce a copy at a more reasonable price. In 2010, I did a completely updated edition with additional illustrations. There’ll probably be a final one, someday, because there’s a lot of ongoing research and new things are turning up. It’s amazing, that after so much time, so much important, new information is coming out.”

You’re hitting the convention circuit. Is this something new for you?
– “I’ve done a little bit, here and there, but there were years where I just didn’t want to talk about it, anymore. I didn’t want to do any interviews, of any kind. Now, I’m more committed to trying to make something good for the world, come out of all this. I’m going to try to stick with it, even though the schedule is getting heavier and heavier. It’s grown, so much, in popularity, I’m on the road every weekend. I’ve got a lot of stuff coming up.”

Where will you be going next?
– “I’ll be in Philadelphia, MUFON’s having a conference there. I’ve got some other things, online. I’ll be in Brazil in November and I did an episode with the Kardashians coming up. They wanted to tour Area-51. I hadn’t really followed the show, but I really wanted to meet Bruce Jenner. I’m glad I did it, even though I might not turn out looking my best, there. You never know how it’s going to go, once they edit it.”