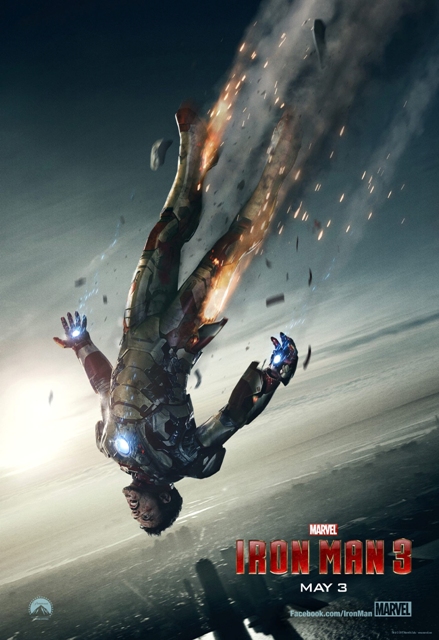 Iron Man 3 is the least super, of all the Marvel movies. But it was crafted that way on purpose.

I’ve always felt the Iron Man movies were more about Robert Downey Jr. being Robert Downey Jr., instead of his portrayal of Tony Stark. This move is more of a vanity project, than a superhero sequel.

Iron Man 3 decides to be a superhero movie without the super heroes. Seems the real joke is on the true Marvel movie fans, the ones who wanted to see more of THE Iron Man. Instead get to see a frail superhero with problems.

Tony Stark is a piping-hot mess. After the alien invasion of The Avengers, he’s not sleeping and suffering from anxiety attacks. When a unique weapon of mass destruction is inadvertently discovered, terrorism becomes the main plot line. This film’s main antagonist: The Mandarin.

When is a bomb not a bomb? Tony Stark goes into full Dark Knight Detective mode, all the while threatening The Mandarin.

After inviting a terrorist to his doorstop, Stark’s home is attacked. Very quickly, Stark is proclaimed dead (while narrowly escaping). He follows the trail of The Mandarin while befriending a young boy (who becomes his Robin). Slowly but surely, RJD, er, Stark’s Mojo returns and he forms an attack plan.

The whole movie revolves around the theory: “We create our own demons.” Ultimately, a little spring cleaning is all it takes to solve all life’s problems.

A little sleight of hand goes a long way — There’s so much here, it just gets ridiculous. But when the pieces slowly come together, it’s a beautiful sight. In the end, everyone’s playing everyone else.

To quote a couple of screen-used dialogue: “A bomb is not a bomb when it’s a misfire.” Sounds like a succinct summary for Iron Man 3.

At the conclusion, Pepper pipes, “What am I going to complain about now?” Does she really want to know?

The post-credits clip is a scene-stealer (as always). And last but not least, it is proclaimed: “Tony Stark will return.” Although RDJ signed on for more Avengers movies, he did not sign on for more Iron Man movies. So, technically, it’s correct.

Strength: Great one-liners; decent climax.
Weakness: This is an unsuited Iron Man movie.
WTF Moment: Pepper Potts suits up to save Stark in the Iron Man armor. I smell a spin-off!

Notable Quotes:
– “You gotta let go.”
– “Jarvis, drop my needle.
– “Everybody needs a hobby.”
– “Ever been to Tennessee, Jarvis?”
– “Nothin’s been the same since New York.”
– “Is that all ya got? A cheap trick and a one-liner?”
– “I’m tittilated about the notion of working with you.”
– “See what happens when you hang out with my ex-girlfriends?”
– “Ever since that big dude with the hammer fell out of the sky, subtlety has kinda had its day.”