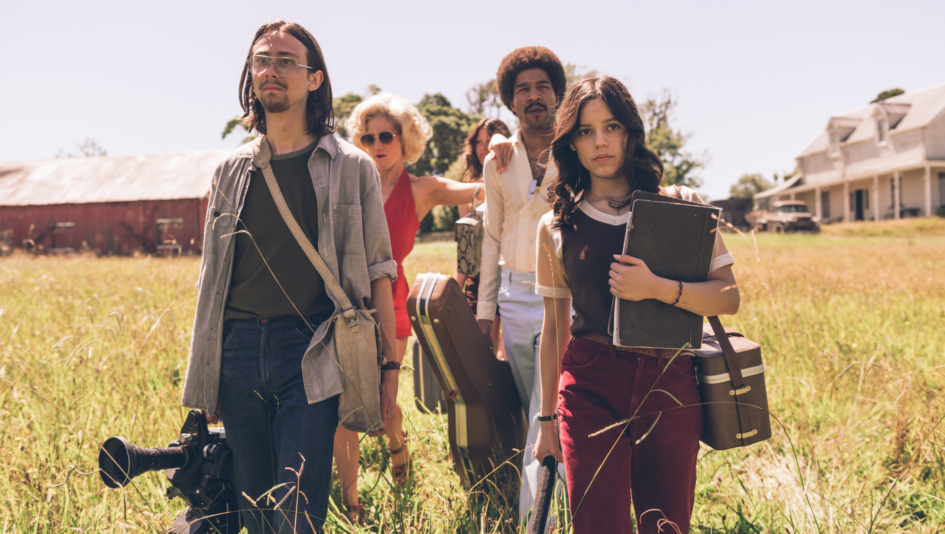 In 1979, the emerging home-video technology has enticed some exotic dancers to cash in on the booming pornography market. These aspiring sex symbols aim for avant-garde art and untold riches, but before they make their last looks, they realize this has become a road trip to hell that might just be difficult to survive (with or without their clothes)!

“You can never be too careful with strangers.”

The storyline of X takes its time to develop, as Writer-Director Ti West makes sure to bring real-life situations into his characters’ lives. You want them to achieve the American dream, even if they’re dealing with taboo topics.

Brittany Snow’s flamboyant Bobby-Lynne is the main attraction here, while Mia Goth’s Maxine has an undying need to become famous. Kid Cudi’s Jackson Hole (What a name!) has transitioned nicely from two tours with the Marines to sex work. Owen Campbell’s RJ claims it’s possible to make a good dirty movie, while Martin Henderson’s Wayne just wants to make some money while having some fun.

“We don’t need Hollywood. These types of pictures turn regular folks into stars.”

When the going gets gory, the true meaning behind those once-judgmental eyes surfaces. Is this a reckoning about small-town life or could it be something about violently reacting to what we have become, as a human race? Why not both?!?

So, when does this sex show turn into a snuff film? Once things go sideways at the boarding house, this becomes isolation horror at its finest, paying homage to The Texas Chainsaw Massacre, among others. At this point, it feels like two separate films were combined, kinda like 10 Cloverfield Lane (Which I really enjoyed!). Obviously, these characters have never watched a scary movie before, as the horror tropes are stacked upon even more horror tropes, although there are a few pretty good jump scares scattered about.

I was unaware of the terms “psycho-biddy,” “Grande Dame Guignol,” “hagsploitation” and “hag horror,” although I was aware of the format, even if I didn’t know the subgenre existed. Each of those descriptors aptly describe X. I enjoyed each of the stories involved that make up the bigger picture of this film, although I wish the Big Bad had a little more backstory and motivation behind the actions that were taken. And I kinda wish the horror story was extended a little longer.

I like seeing a different side of low-budget horror and look forward to seeing more style from this subgenre. While the subject matter may prevent large audiences from seeing this exploitation horror tale inside movie theaters, I predict big things from future home viewings.