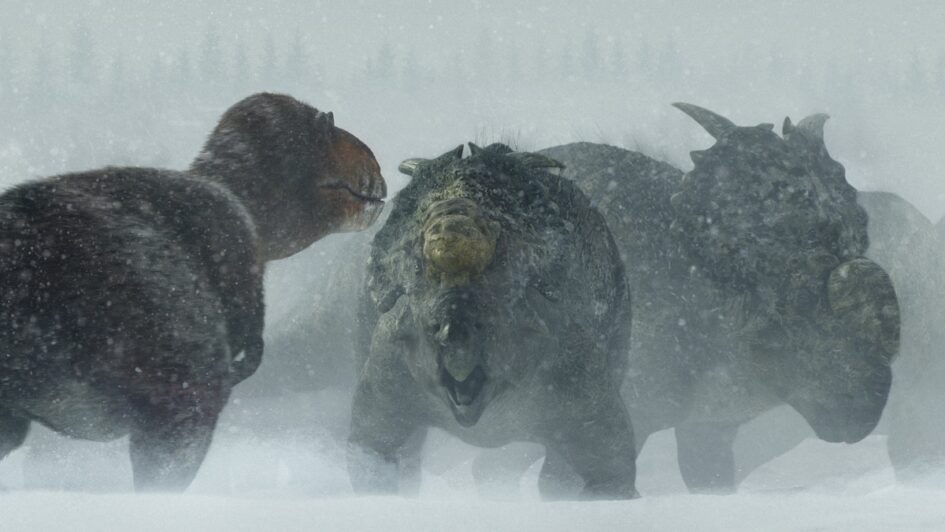 Per Matt
One day, Jon Favreau, Hans Zimmer and Sir David Attenborough walked into a bar together. After visiting with each other for a few minutes, they compared dream projects and began pondering what it would be like to work with one another. Like an explosion, it hit them as they agreed to create Prehistoric Planet!

I have no doubt that scenario never happened, but it amuses me to think that it could have happened, somehow. I mean, that seems like a very odd grouping that might actually prove entertaining at a dinner party, but could they all actually work together, cohesively?

For the latest outing of BBC Studios and the producers of Planet Earth, the talents of producer Jon Favreau were employed in order to bring this story to the small screen, 66 million years in the making.

If you could imagine the technology of the live-action version of The Lion King, but substituted with dinosaurs roaming actual lands, seas and skies instead of talking animals, you’ve got the setup for this limited series, which is currently streaming on Apple TV Plus. T-rex makes appearances in multiple episodes, but that doesn’t mean other species aren’t featured. There are flying giants in the skies, monstruous reptiles within the seas and on land, animals of all kinds struggle to survive.

The latest scientific research brings new information about how these creatures lived and the latest imaging technology brings them to life, but there’s many creatures I’d never heard before, let alone seen their likeness outside Jurassic Park. For example, there’s the Hadrosaur, Ornithomimus, Olorotitan, Troodontidae and Antarctopelta. But have you ever heard of a Pachyrhinosaurus, Nanuqsaurus, Austroposeidon, Carnotaurus, Corythoraptor or Qianzhousaurus?

The storytelling is a little dry, as this documentary series features familiar-looking creatures that look cool, but they don’t do anything really interesting. And they really feel like CGI creations. Sure, there’s factoids sprayed about the giant herbivores, the tiny carnivores and all the other omnivores, but these creatures look and act quite differently from the usual BBC documentary subjects.

Through changing seasons and changing landscapes, mother nature can be cruel, especially as brush fires raged out of control.

“The prehistoric planet is a green planet.”

I found “Coasts” and “Ice World” to be the most interesting of the season’s five episodes. Naturally, this show premieres just before Jurassic World Dominion hits the big screen, and yet my biggest takeaways come from a variety of small offerings.

Do you know how the Triceratops counteracts eating poisonous plants? Why the Tuarangisaurus ate pebbles, and the Ankylosaurs chose to chomp on charcoal? Watch this series and you, too, will find out!

Prehistoric Planet examines these extraordinary creatures, as this series is a teaching device, like it or not. And I did like it. I just wanted to see more creatures from the frozen and deep-sea environments.