Geek Culture and the New Era of Oscars

In less than a week, the 89th Academy Awards will commence. For the everyday moviegoer, the Oscars have commemorated a selection of niche films until recently. Though, often, art-house movies come away with the top awards, relatively popular movies clean up in some respect, as well. For every Titanic and Forrest Gump, there are a handful of movies like 12 Years a Slave and The English Patient.

For most of the Academy’s run, Best Picture nominees were limited to just five a year. At least, it has been that way since around the time World War II ended, up until just a few years ago, bumping the nominations up to around 10 a year. Knowing the appeal and intrigue of having a larger number of nominees has been motivation for the Academy, which has seen viewership fall from the low 40 millions to the mid-30 millions since the early ’90s. Broadening their parameters has been a welcoming gesture for fans of mainstream films that haven’t gotten the credit they deserve.

At the 2009 Academy Awards, the expansion of nominees included films like Up, Avatar and District 9. Digital animation and science fiction had almost never been represented in the Best Picture category before then. Only A Clockwork Orange, Star Wars and E.T. had been nominated in the sci-fi genre before 2009 and the sole animated film to get a Best Picture nod up until then was 1991’s Beauty and the Beast. Just last year, The Martian and Mad Max: Fury Road landed nominations and ended up losing out to Spotlight. At this point, it seems like the expansion of nominees is a hollow gesture, as dramas and the like come away with the Oscar just under 50 percent of the time.

It makes sense that films with underlying social themes and inspirational premises get the brunt of the acclaim. Movies like those speak to mass audiences, as they aren’t out of the norm for most of us who have related to them in a way. No one can really relate to fighting a galactic empire using abilities equivalent to magic in order to triumph. We can appreciate the themes presented and how they can relate to our own struggles, but don’t fully value what they mean in relation to our daily struggles. 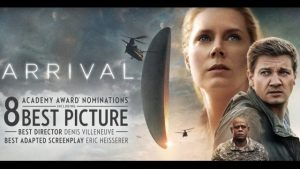 The Oscars have known the virtues of expanding their awards throughout the years. In 1981, the Best Makeup award was instituted after the use of makeup in the 1980 film The Elephant Man. It was introduced only at the request of the filmmakers, but wasn’t implemented until the next year, when Rick Baker claimed the award for the movie, An American Werewolf in London. The first Academy Awards ceremony only included 12 major award categories, some of which have been retired, and has now doubled the number of awards since 1929.

So, what are we expecting out of the 89th Academy Awards in the science-fiction category? Passengers is nominated for an award in production design, Star Trek Beyond gets a nod for the makeup and hair styling award, and Doctor Strange gets a visual effects nomination this year. But the movie that breaks the norm for sci-fi award nominations this year goes to Arrival, which has been nominated for eight awards, including best picture. The movie has garnered a 94 percent rating on Rotten Tomatoes, with an 83 percent audience score and an 8.1/10 score on IMDb. The movie is a longshot to win the most-prized Oscar, but has brought attention to the Academy for recognition. When a science-fiction film finally wins the award, it will be an unprecedented triumph for those of us who grew up loving the genre.