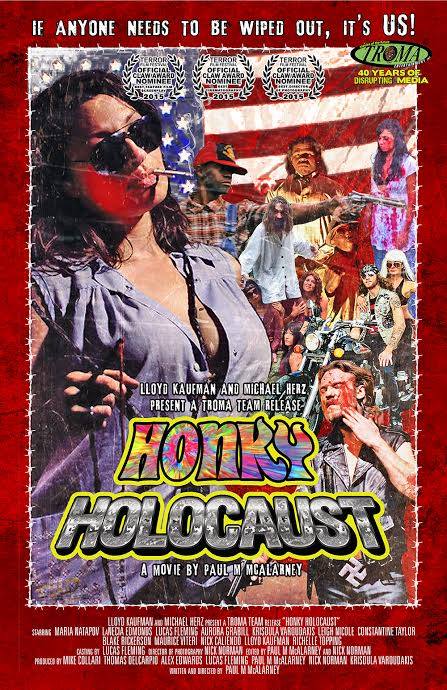 A few weeks ago, I was given a screener for one of Troma films’ newest acquired flicks: Honky Holocaust. Jumping at the opportunity to review anything from the Kaufman group, I couldn’t wait to find time to screen what would be one amazing film.

Honky Holocaust is a film from Paul M. McAlarney. It focuses on an alternate reality in which Charles Manson was able to actually start the race war he long dreamed of. While his family hid inside their bunker, the world around them drastically changed, but not in the way he hoped for. In this world, the white race lost and African Americans reign supreme. From the moment they stepped out of their shelter, the children of Charlie knew their lives where in trouble.

Mirroring many of the racial injustices forced upon real-world people during the ’40s and ’50s, Honky Holocaust is what one news site called, “Caucasians getting a taste of their own segregation.” From lynchings, beatings and police brutality, Honky Holocaust brings to light many social and racial issues that are in the news today, only reversed.

Honky Holocaust has many of the Troma calling cards: Full-frontal nudity, graphic violence and vulgar language. But something about this film was lacking, to me. I found myself feeling like I was not watching a Troma film, but something trying to bring forth a deeper message than I was prepared for. Normally, I can find something I love in these types of films. But unfortunately, this film just left me bored.

I get it. Not every film can be a fun, frantic frolic through a world full of monsters or super-humans, ready to destroy (or screw) whatever is in front of them. But I think I have had enough racial tension in the past couple of years for a lifetime. I was looking for an escape, but what I found was a cold, hard look from a reverse point of view. And not one I really wanted.

So, if you are looking for a thought-provoking film full of reverse stereotypes and discrimination, check it out. But for me, I think I would rather have passed.