Hocus Pocus 2 Has All the Charm of the First Film, But Will That Work in 2022?

October is upon us, for 2022. We can expect many horror films, family friendly spooks and pumpkin-spiced everything to envelope all the senses. I particularly love this season, ’cause of the opening of the annual haunted attractions and hayrides. But, as a single dad, I don’t get to partake in as many ghoulish scares as I used to. I had the plan earlier this year to actually start my own haunted house, so I could still experience the thrills and chills. But due to circumstances beyond my control, I had to pull out of the deal. Still, my love of the season carries over.

As mentioned, Disney also has a love for Halloween. The House of the Mouse puts out some of the best materials of the year in hopes of cashing in on the nostalgia of its fans. While there’s several great scary films with kids in mind, the most beloved is probably Hocus Pocus.

The original film, released in 1993, follows some young adults having to stop three witches called the Sanderson Sisters. While most movies featuring witches go to great lengths to make them unlikeable and scary, Winnifred (Bette Midler), Sarah (Sarah Jessica Parker) and Mary (Kathy Najimy) Sanderson all come across as competent, but slightly inept crones. Some kids even found them lovable, despite the fact their sole mission was to find and eat children to stay alive beyond Halloween night. It is this love for the characters that has led the charge in recent years for a follow-up to to be made.

And this year, Disney answered those cries with Hocus Pocus 2.

Taking place in the present-year Salem, Hocus Pocus 2 finds Becca (Whitney Peak) and Izzy (Belissa Escobedo) as two high-school students who are somewhat bullied in school. Becca believes this is due to her fascination with witchcraft. The pair regularly hangs out at the Olde Salem Magic Shoppe, which is owned by Gilbert (Sam Richardson) and located on the previous Sanderson property.

One night, the girls accidentally summon the Sanderson Sisters back from the dead, breathing new life into the old witches. With the same mission at hand as before, the witches seek out the youth of Salem, as to finish their spell to attain immortality. It is up to Becca and Izzy to find a way to stop Winnie, Mary and Sarah from their task. 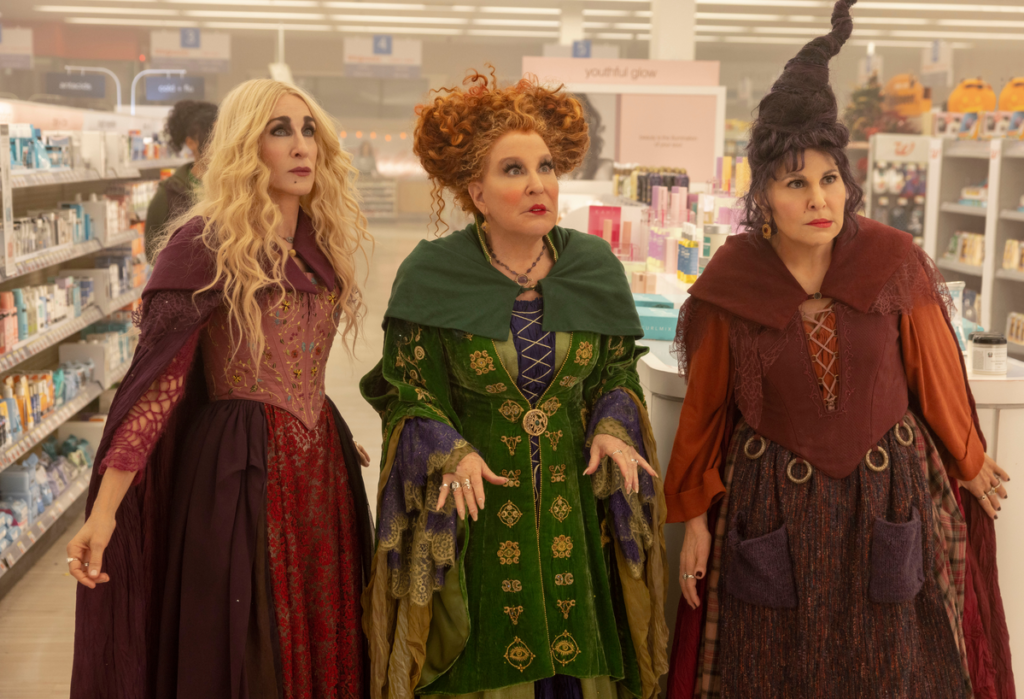 Much of what made the original such an iconic film is brought into Hocus Pocus 2. The Sanderson women break into song to help cast some of their spells. Sarah and Mary still come off as the “Larry and Curly” to Winnifred’s Moe character (I am speaking in terms of The Three Stooges, for those who don’t get the reference).

The kids follow the same formula of not believing in the witches, to trying to convince their parents and friends that their lives are in danger. And we even have Billy Butcherson (Doug Jones), the former boyfriend of Winifred, back as a falling-apart Zombie. Really, the only thing missing from the first film is Billy the cat, though there is a feline presence throughout the film.

With 29 years passing since the first film was released, the world has vastly changed. However, Hocus Pocus 2 feels like a very well-made update. It is a tribute to all the things that made the story and characters memorable, with a little humor from modern times (if you can’t find a broom to ride, grab some Roombas).

The songs chosen may not be as fun as “I Put a Spell on You”, but still work fine. Plus, we get some backstory on the sisters and find that despite squabbles between them, they love each other more than anything else in the world.

Hocus Pocus 2 humanizes the Sanderson sisters to the point where you fall in love with them in a way. They are monsters, but they are sympathetic monsters. When you stop and think about it, all they wanted to do in both films was live forever. Who wouldn’t want to do that? Who wouldn’t want unlimited power? Deep down, we all would like to be able to cast spells and stop the aging process. And Hocus Pocus 2 brings focus to this for the wizardly women.

I even found myself all misty-eyed at the film’s climax. No spoilers, but when you see it, you might get the same feelings.

No doubt about it, Hocus Pocus 2 gets five out of five stars. It is available on Disney+ starting September 30, 2022, and it is my opinion that fans of the first movie should shell out the money for a monthly subscription, if only for this delightfully spooky flick. Hocus Pocus 2 is a film that remembers its roots and doesn’t change what worked. I know it will be a highly loved addition to my film library going forward.