Iron Fist — What to Expect From the Comic Book Martial Artist

Iron Fist is the latest Marvel superhero to cross into the Marvel Cinematic Universe. He joins the ranks of Daredevil, Jessica Jones and Luke Cage with his own solo streaming series. The public is privy to his part in the Netflix crossover team, The Defenders, but who is Iron Fist and what can we expect from the martial-arts master, based on his comic book beginnings?

The character debuted in 1974, created by Roy Thomas and Gil Kane in Marvel Premiere #15. The creators were heavily influenced by martial arts movies and television of the early 1970s. Parts of the character’s origin seem to borrow elements from the Kung Fu television series.

Daniel “Danny” Rand is the son of Wendell Rand. As a child, Wendell happened upon the ancient mystical city of K’un L’un, where he saved their leader, Lord Tuan, and becomes an adopted son. Wendell left the city and became a wealthy American businessman. He marries, has a child and when Daniel is a young boy, sets off to return to K’un L’un with his family and his business partner. On their journey through the difficult, cold mountain passes, Wendell is betrayed by his partner and dies. Daniel and his mother escape, only to be attacked by wolves. Soldiers of K’un L’un rescue Danny, but not before his mother dies.

Young Danny is taken to K’un L’un and becomes the apprentice to Lei-Kung, the Thunderer. Danny is quite adept at martial arts. He conditions his fists, using sand, gravel and rocks to toughen them. He fights and defeats the dragon, Shou-Lao the Undying, absorbing the dragon’s supernatural energy and gaining the power of the Iron Fist. By focusing his chi, or his life energy, Iron Fist can enhance his natural physical and mental abilities. Through focusing his chi, his fists can strike with superhuman power and hardness without harm to Danny.

After ten years of training, Danny returns to the United States, where he reclaims his family’s company from his father’s treacherous business partner and becomes both an entrepreneur and a superhero in New York City. 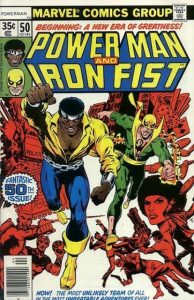 Iron Fist and Luke Cage (also known as Power Man) cross paths as their mutual friends are kidnapped and held hostage. The two work together and form a close friendship, one that has lasted for years. As sales of their solo comic books were dwindling, the two united as their respective books were combined to form “Power Man and Iron Fist” in the late 1970s. For nearly ten years, the duo battled villains as the Heroes for Hire. Each character is practically synonymous with the other, due to the amount of times they have worked together and the overall camaraderie they share, despite their vastly different upbringings.

Iron Fist died abruptly at the end of the series’ run in 1986. Danny is diagnosed with cancer and then dies at the hand of Captain Hero, with Luke Cage being the primary suspect of his death. The character remained dead for a number of years, until he was resurrected, having been in stasis, focusing his chi to heal himself. It was later discovered a doppelganger died in his place.

Iron Fist has been a member of the Avengers and the Defenders and currently works, as usual, with Luke Cage as one of the Heroes for Hire.

I expect the Netflix series will focus more on Iron Fist’s return to New York to clean up the streets after his origin story is explained. Expect to see many cross references to the Luke Cage series, as they share many supporting characters. I especially look forward to establishing that amazing bond of friendship Danny and Luke share in the comic books.

My hope is that the series will be more than a bunch of martial arts action sequences and something more that builds up for The Defenders series and eventually will tie into the Marvel Cinematic Universe crossover blockbuster, Avengers: Infinity War. Most of the Netflix Marvel heroes have played important roles with the Avengers, post Civil War, in the comic books. I hope this series connects the dots to the films that this fan has been waiting for.