Jack Ryan Gets a Modern-Day Makeover

With a large budget, multiple shooting locations, intriguing plot and good actors, this Amazon series is better than most of the other spy shows and dramas out there. It’s certainly better than any in the genre on network television and most of the stuff on cable. The exception might be The Americans on FX, but with that spy series coming to a close, you’re probably looking for a new show to pick up. That’s where Amazon comes in. Much like Amazon creating a Lord of the Rings series because HBO’s Game of Thrones is coming to an end, I feel like the provider is pouncing on the audiences of big-name genre shows that are having their finales. Fortunately, with Jack Ryan, we have a show that’s intriguing, as well as entertaining.

There are a lot clever things this series shows us, like how the terrorists move money around and their unique method for communication. The show also gives a way of making things personal between Ryan and the terrorist leader, Suleiman. Suleiman’s endgame is also clever and just plausible enough to make it scary.

Much like The Wire, we don’t only follow the character of Jack Ryan (actor John Krasinski from The Office and A Quiet Place), but several of the supporting characters, as well. You might even find some of the supporting plots more dramatic than the main plot. Watching Suleiman’s wife, Hanin Ali, try to escape his grasp and save her children is particularly emotional. The subplot with Victor Polizzi also shows us what a heavy toll being a drone pilot can take on a person. It’s almost a shame that the main interaction between Jack Ryan and his future wife, Dr. Cathy Mueller, is the weakest on the show. Ryan has better on-screen chemistry with a French police captain while pursuing a terrorist through The Alps. Maybe if Amazon wanted John Krasinski’s Jack Ryan to have actual on-screen chemistry with a blonde, they should have hired his real-life wife, Emily Blunt, to portray Cathy Mueller. The pair works together well on-screen in A Quiet Place:

We follow CIA analyst Jack Ryan as he uncovers a money trail that might lead to a new Islamic terrorist on the rise. He’s brought along to Yemen by his new boss, James Greer (actor Wendell Pierce from The Wire), to help interview some suspects as he follows the money. Soon, desk work becomes fieldwork as we watch Greer give Ryan some real hands-on training in the world of spycraft and counter-terrorism. Ryan’s intelligence training and time as a former Marine help his evolution into the beginnings of the character we know from the books and movies.

Most audiences will know actor John Krasinski from his strong performance in the hit horror movie A Quiet Place (which I reviewed here). But Jack Ryan isn’t his first time playing this sort of role. I’d direct viewers to his role in 13 Hours: The Secret Soldiers of Benghazi for another similar and solid performance by the actor.

Krasinski’s portrayal of Jack Ryan is certainly better than the two most recent portrayals that’ve come before him: Chris Pine in 2014’s Jack Ryan: Shadow Recruit and Ben Affleck in 2002’s The Sum of All Fears. But Krasinski is nowhere near as good as the other two actors who’ve portrayed Jack Ryan on-screen. While most audiences were introduced to the character with Alec Baldwin’s depiction in The Hunt for Red October back in 1990, the quintessential version of the Jack Ryan character on-screen is arguably by Harrison Ford in 1992 and 1994. Patriot Games and Clear and Present Danger is how I was introduced to Jack Ryan and the way I picture him in my mind’s eye.

Jack Ryan has quite the political career in the books and eventually becomes the President of the United States. This is the reason why, when I watch Harrison Ford in Air Force One, I see it as President Ryan saying, “Get off my plane!”

The role is so iconic, I was thrilled when Leslie Nielsen played a U.S. president in Scary Movie 3 and he asked himself, “I wonder what President Ford would do?” Pictured behind him is a portrait of Harrison Ford, instead of Gerald Ford. 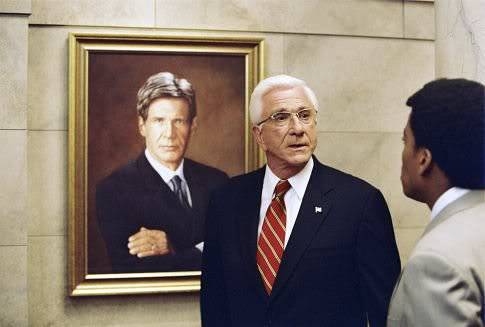 The easiest way that the Jack Ryan series can side-step Harrison Ford comparisons would have been for John Krasinski to portray Jack Ryan Jr. His son follows in his father’s footsteps by entering the spy game. It would also provide the opportunity for “President Ford” to make a cameo. Books like The Teeth of the Tiger — set closer to the present day than what Jack Ryan Sr. did in Red October or Patriot Games — could easily be adapted for modern viewing. The Amazon show doesn’t directly adapt any of Tom Clancy’s novels for the series and I think that it is the poorer for this.

Still, if you’re looking for a new spy series, I’d recommend you check out Jack Ryan on Amazon. The plot, and certainly the sub-plots, are intriguing enough to keep you watching episode after episode. I binge-watched the entire series the weekend it was released. The big budget, impressive locations, nice camerawork and cinematography will keep you from glancing down at your second screen. The actors are good and the characters are just faithful enough to Tom Clancy’s original that I find this series acceptable. 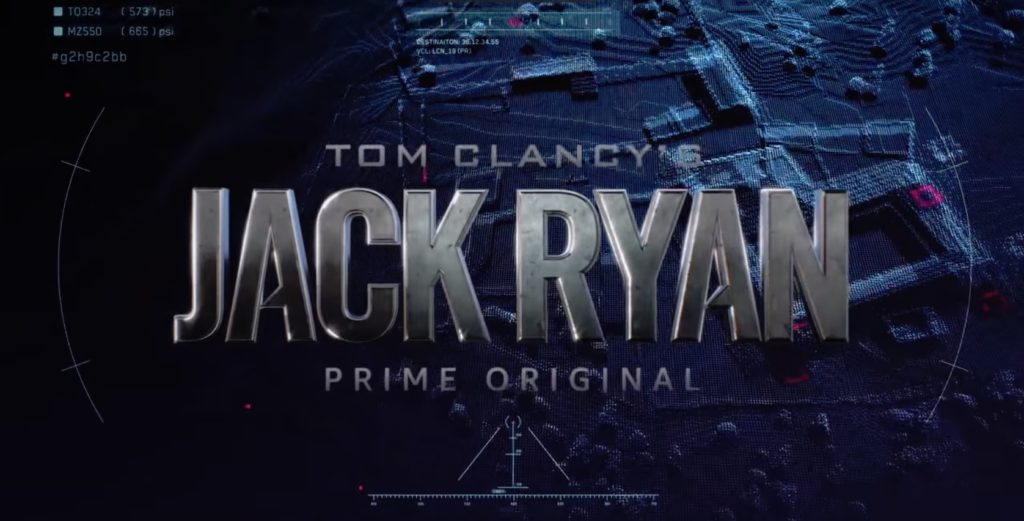