Jordan Peele’s a Fan of the Paranormal? Well… Nope! 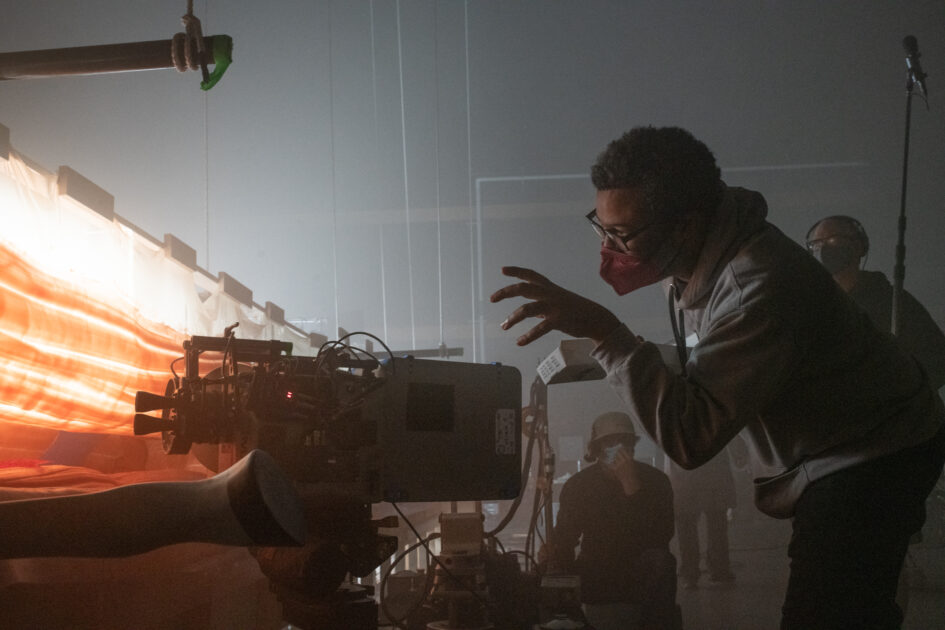 Writer/producer/director Jordan Peele on the set of Nope.

Per Matt
As soon as the end credits faded away at a recent Nope screening, I tried pondering what the award-winning filmmaker was aiming for with his latest release. I was reminded of race relations as a horror film in Get Out. I then remembered the spooky, Bizarro world of doppelgangers in Us, and wondered how, exactly, Jordan Peele found his way into the paranormal genre with Nope.

It’s totally possible his beginner’s luck far exceeded anything imaginable with his first outing. His sophomore slump really was a disappointment in comparison, as that movie felt like way too many plot devices were thrown at the camera in hopes of finding something that would stick (Hint: None of them were very successful). Peele’s third big-screen outing is described by IMDB with the horror, mystery and sci-fi genres.

The film begins with a family owned horse ranch located somewhere within the Inland Empire. A series of unfortunate incidents finds OJ (Daniel Kaluuya) and Emerald (Keke Palmer) slowly selling off their family’s property, piece by piece in order to stay afloat. But when even more mysterious events lead them hunting for the money shot, or, as they succinctly describe it, “the Oprah shot,” the unexplained activity steadily increases (as well as the horrors).

What we have here is a multi-genre story wrapped within a $68 million budget — Peele’s biggest yet. And by spending that amount of money, there’s huge box-office expectations by his distributor: Universal Pictures. Unfortunately, Peele’s focus as the primary writer and director of the film (officially, there are five other producers) are a little too scatterbrained for this story. He lacks focus. The movie feels like multiple pieces of fabric were sewn together for a tapestry telling this tale. But there’s never enough time or effort given to an individual part to bring true meaning to its conclusion.

OJ and Em bicker just like every other brother-sister combo imaginable. As their backstories are pieced together, the criminally underused Keith David is more sympathetic as their father, and he barely has any screen time. Then we flash forward to Steven Yeun, who receives too much backstory that feels unnecessary for the ongoing action. (I was thrilled to see the former Walking Dead actor in this film — it is finally time for Hollywood to invite the filmmaker into more mainstream projects!)

Then there’s the paranormal aspects, that seem more laughable than serious, as the comedic moments always seem to center around the unknown. These characters’ lives are at risk, yet the main antagonist is never identified, never seen and motives are never really known.

I’d say this is more a horror comedy than paranormal horror, so being released during an incredible heat wave is the perfect time to enjoy the air conditioning of movie theaters with this popcorn flick.

Peele’s passion for hunting down classic songs that can be reworked into creepy, hip new renditions decades after their original release parallels Quentin Tarantino, who can always seem to create big-screen scenarios to make them cool again. Maybe Peele spent too much time with the music department and not enough time with Final Draft. The main characters here needed more development. The story needed more fine tuning. Maybe he was simply trying to cram too many meaningful thoughts into minor details.

I was hoping for a serious sci-fi story with horror elements. I’m still hoping Peele can create one. As he explores new subgenres, he grows as a filmmaker, even if Nope doesn’t surpass the quality of Get Out.